A Montreal developer has rejigged its plan to build a multi-tower residential project at a prominent site in Sandy Hill, reducing the proposed number of buildings from five to four while adding new amenity spaces and significantly altering the overall design.

Place Dor​ée Real Estate Holdings’ original application filed with the city in January called for four highrises of 30 storeys each as well as a nine-storey building at 2 Robinson Ave.

Located near the intersection of Nicholas Street and the Queensway, the wedge-shaped, 5.7-acre plot of land used to be the home of the Iranian Cultural Centre. The facility closed in 2012 after the federal government under then-prime minister Stephen Harper expelled Iranian diplomats from Canada.

Squatters later occupied the boarded-up building, which was damaged by two fires and eventually torn down.

In revised planning documents submitted last month, Place Dor​ée says it’s now looking to build two 28-storey towers and a pair of 32-storey highrises on the site in a new configuration that leaves more room for green space and other amenities.

The developer did not immediately respond to requests for comment on Wednesday. In an email update to constituents, city planner Andrew McCreight said the revised plan was submitted “in response to comments” from residents.

The L-shaped nine-storey building that was proposed for the north end of the property in the original concept has been scrapped. Instead, much of that space will now be dedicated to amenity areas, according to an architecture package submitted with the application.

The total number of residential units in the updated proposal has been cut from 1,625 to 1,463. The new-look plan includes slightly more parking, proposing 953 spaces, most of them underground, as opposed to 934 spots in the previous version.

Meanwhile, the developer appears to have made efforts to improve the flow of pedestrian traffic on the site, putting a little more breathing room between buildings. In addition, the revised plan now includes a public amphitheatre located just east of the northernmost tower.

The three highrises on the south end of the site would feature a total of 27,000 square feet of ground-floor commercial space fronting on to Lees Avenue and a half-acre park that is planned for the southeast corner of the property. 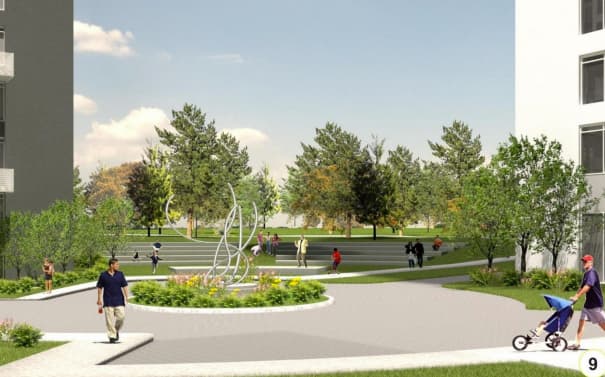 The application doesn’t specify whether the units would be rental apartments or condos.

However, the property is located less than half a kilometre from the University of Ottawa’s main campus, and development plans for other nearby properties have proposed rental projects aimed at students.

Place Dor​ée notes that the university’s master plan includes a potential student housing highrise across the road at 1 Robinson Ave. that could accommodate up to 1,180 units with more than 4,000 beds as well as ground-floor commercial and retail space.

The builder is requesting an amendment to the current secondary plan, which limits buildings to 20 storeys on the southern portion of the site and six storeys on the north side. Place Dor​ée is also seeking minor zoning changes, including permission to allow stacked bicycle parking.

Noting that the property is within 400 metres of the Lees LRT station, the application says the plan offers “a significant opportunity for redevelopment of an underutilized property” near the downtown core.

“By providing high-density residential uses and opportunity for commercial development, the development will promote the use of public transit, active transportation, and increase housing and supportive commercial options in the area,” the consultant’s report filed on behalf of Place Dor​ée says.