Each tiki hut boat equipped with own bar, can accommodate up to 12 passengers

Floating tiki hut bars on the Ottawa River? Arguably not since the days of giant mechanical creatures roaming our streets has such a novel tourism idea come to Ottawa.

Rockland entrepreneur Michael Karpishka and his business partner Gaby Saucedo are two months away from launching Ottawa Tiki Tours, a new boat cruise company that plans to take passengers on fun and relaxing 90-minute rides on local waterways, running from late May through to October.

They had the public at aloha, judging by the current demand for bookings. The business has been flooded with requests over the past seven days, says Karpishka.

“The way sales are going, we’re probably going to be sold out before May starts,” he said during an interview alongside Saucedo at the Mill St. Brew Pub, located just west of downtown on the banks of the Ottawa River.

At a time when international travel is limited and social distancing measures are in place, cruising around on a tropical boat can offer a much-needed change of scenery from the same-old, same-old pandemic.

“Mostly, people are looking at us as a really cool experience, a destination experience,” Karpishka said.

About 90 per cent of the bookings, he said, are being made by people in the region within a two-hour driving radius.

The whole concept is not purely a floating bar, stressed Karpishka, who says tours are open to families, birthday parties and special occasions, and aquatic-loving teetotalers.

“We’re a tour that serves drinks. It’s like going to the movies, right? Nobody would think of Landmark Cinemas as a bar, but you can order wine.”

Karpishka first got the idea to create Ottawa Tiki Tours in August 2019, after checking out similar operations in the United States, beginning with Lake George, a popular Adirondack Mountain vacation destination in upstate New York.

“I was fascinated right away,” said the former franchisee owner and curriculum developer with the Mad Science educational program.

Ottawa Tiki Tours is currently in the process of building two commercial small vessels. Each one will be able to take up to 12 passengers, crew excluded. Customers can order alcohol and non-alcoholic drinks and are welcome to bring their own food, as there’s a limited selection of snacks. For environmental reasons, there will be no use of plastic cups.

The octagon-shaped, triple-hull pontoon boats, measuring 18 feet in diameter, will come with a 40-horsepower outboard motor and a private bathroom. There will be a first mate, or bartender, on each boat. The roof-covered floating barges will be driven by seasoned captains with valid SVOP (Small Vessel Operator Proficiency) certification. As well, the marine crafts will be stocked with life jackets.

One barge will depart from Rockland, located on the Ottawa River a half-hour drive from Ottawa, while the location of the second boat has yet to be determined. Karpishka would ideally like it to also be on the Ottawa River but in the downtown area, to offer scenic views of Parliament Hill and the Rideau Falls. Mooney’s Bay is another possibility.

The Rideau Canal, which has previously been designated a UNESCO World Heritage site, is not an option at this point.

Karpishka believes customers are more interested in having a fun and relaxing experience than having a full guided tour.

“If you really want to go for the sights and learn about the capital buildings, go on Paul’s Boat Lines or Lady Dive Tours.

“They’re coming onto our boat because they want to hang out with a group of friends, have a drink, have some chicken wings or whatever, as part of the bring-your-own-food experience, and just relax to tropical music or their own playlist of music.”

Ottawa Tiki Tours aims to have its boats cruising by the Victoria Day long weekend. If all goes well, the company will introduce a third vessel later this summer, mainly to accommodate customers in need of a spare watercraft due to anticipated weather-related rebookings.

“We can hit the choppy water, but it’s just not going to be a pleasant experience,” said Karpishka. 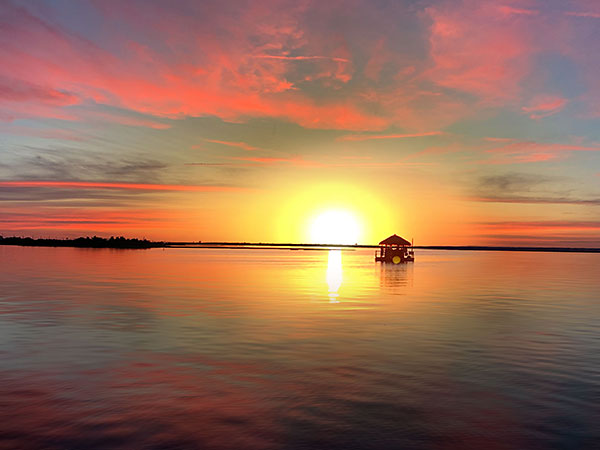 It seems the Ottawa River, a centuries-old historic trading route, is finally getting the attention it deserves. Development is well under way on Zibi, a massive residential and commercial riverfront community. The new interprovincial zip line ​– another really cool outdoor experience ​– is expected to be operating over the Ottawa River in 2021. As well, the National Capital Commission has been opening outdoor bistros by the water.

Ottawa residents have started seeing their city in a new light, says Karpishka, since Canada’s 150th birthday celebrations in 2017, when the city hosted a series of spectacles, including La Machine’s giant mechanical dragon and spider. The show was part of an innovative urban street performance that spanned several days.

“Ottawa is really positioning itself to be one of the coolest cities in Canada. I think, in the next five years, Ottawa is going to have a very different face than what we have right now.”

The total investment being made by Karpishka and Saucedo in their new business is roughly $200,000. Other municipalities, including Belleville and Orillia, have been contacting the owners and expressing an interest in bringing tiki hut boats to their waters. Ottawa Tiki Tours wants to expand and form partnerships beyond the capital.

“We wanted to have 50 boats in the water over the next five years,” said Karpishka. “It looks like it’s going to happen much sooner than that.”