The doors of opportunity will be opening Nov. 6 for more than a dozen men and women graduating from The Ottawa Mission’s Food Services and Training Program with the skills they need to work in a commercial kitchen.

They’ll be opening for another reason, too. Up to 300 supporters of the Mission’s signature fundraiser, Blue Door at your Door, will be receiving the home delivery of dinners carefully prepared by said students.

Sponsors have agreed to match donations made by the public up to a maximum of $95,000.

Greenspon has chaired the Blue Door fundraiser for each of its four years with Sheila Whyte and Michael Moffatt from Thyme & Again, a popular take-home food shop and catering company. Some of the graduates of the Mission’s training program have gone on to work for Thyme & Again. 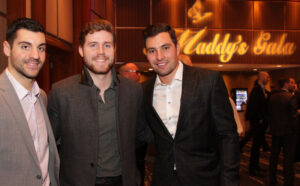 The Blue Door Gala, named after the blue front door that opens into the Mission’s 35 Waller St. building, attracted 570 guests in 2019 and grossed $238,000. Then the COVID-19 pandemic came along and put a kibosh on large gatherings, causing organizers to rejig their format to a virtual one. They’re hoping to raise $300,000 this year, which would be their highest gross to date.

Supporting Blue Door since the beginning is Caivan, which was represented at the launch by senior vice-president Jonathan Wiseman.

“It really is something that we’re proud to be part of,” he told a crowd that included Scrivens Insurance partner Michael Scrivens and Bell Community Affairs regional director Sandy McDonald – both of whom have also been loyal supporters of Blue Door.

What was particularly special about Thursday’s launch was the venue: Chef Ric’s at 384 Rideau St. It’s the brand-new home for the Mission’s Food Services Training Program (FSTP).

The location is named after Chef Ric Watson, the hard-working and dedicated director of food services at The Ottawa Mission and the driving force behind the program, which boasts a 90 per cent employment success rate. He’s affectionately, and respectfully, known as Chef Ric at the Mission and in the broader community.

The Mission had been eagerly looking to expand its FSTP when opportunity came knocking in the form of Lalit Aggarwal, president of Manor Park Management. The Ottawa businessman had some vacant retail space formerly occupied by Rideau Bakery that he was willing to let the non-profit organization move into for a cost of next to nothing. The Mission raised the funds needed to refurbish the place and bring it up to code.

“Two years ago, when we started looking, we had no idea this is where we were going to end up,” Peter Tilley, CEO of the Mission, said while speaking in front of the eye-catching donor wall. “It’s thanks to this great community of ours that made this all possible.”

FSTP student Erica La France shared with everyone the Canadian-themed menu for this year’s Blue Door at your Door. The meals are prepared by the students, under the supervision of Chef Ric, as part of their final exam.

La France is already working full-time at Pelican Seafood Market and Grill. Its co-owner, Jim Foster, previously donated a food truck to The Ottawa Mission so that the organization could deliver meals across the city.

All-Canadian menu for Blue Door at Your Door

Before the pandemic, the Mission was serving about 520,000 meals. That number grew to more than 728,000 last year and is on track to reach between 900,000 and one million meals this year, according to the Mission.

The Mission runs a men’s-only shelter and provides food, clothing and toiletries to individuals experiencing homelessness and poverty. It also offers services to men and women in the areas of addiction and trauma, mental health, education and employment, supportive housing and spiritual support. As well, it provides marginalized populations access to primary health care.

The Ottawa Mission is having to “step up to the plate” like never before to keep up with increased demands, said Tilley.

Blue Door at your Door airs on CTV Ottawa on Nov. 6 beginning at 7 p.m., and will also be available on YouTube. For more information on the how to donate, watch the program or to order a special dinner, go to: https://ottawamission.com/events/blue-door-at-your-door/