Like a big, juicy cheeseburger and fries, food and real estate go hand in hand.

Location, after all, plays a vital part in many restaurants’ success. And an Ottawa-area chef believes he can capitalize on the popularity of his hamburger joint by partnering with shopping malls and big-box stores such as Home Depot to create an effective and sustainable business model.

But can you really build a real estate business out of beef? Matt Dobry thinks so, and he’s out to prove it.

The certified Red Seal Chef is a 37-year-old parent of three beautiful little girls with his spouse, naturopathic doctor Kealy Mann. They live in the small town of Pakenham, about 20 minutes west of Ottawa by car.

Mr. Dobry has been in the food business since he was 15, starting at a KFC restaurant on Highway 401 near Toronto, followed by a three-summer stint as a server at Upper Canada Village (complete with 19th-century costume).

He tried college for three years until his then-girlfriend (now his wife) noticed how much he hated it. She also pointed out that he’d never missed a shift serving at Cordon Bleu. Why not do what you love full-time, she wondered aloud?

With help from his in-laws and a few maxed-out credit cards, Mr. Dobry enrolled in a private culinary school. Eventually, he and his growing family moved from Toronto to Pakenham, and he started working at the House of Commons restaurant as a sous-chef feeding everyone from the prime minister to backbench MPs.

It was a great gig, made even better by the fact that Mr. Dobry is fluent in French. But despite the predictable working hours, great benefits and superior pension, he knew the opportunities for advancement on the Hill were limited, and the entrepreneur inside him was calling.

For advice and coaching, he turned to Invest Ottawa and Mark Cawley of the Ottawa Community Loan Fund, a non-profit organization that arranges business loans to local startups. Mr. Dobry worked on his financing plan, cash-flow projections and business proposal for what is now Burger Builder, a high-end food truck that’s been carefully branded by Mr. Dobry with a menu crafted to complement its physical layout.

Like almost all business plans, his changed drastically when concept met marketplace. The fledgling burger baron had vastly overestimated his sales and underestimated his costs. Sound familiar?

“I had no real idea how to manage payroll, cash, expenses, suppliers,” he concedes, looking back.

“In our first month (May) we lost 30 grand, but I didn’t know that until August, our accounting was so bad,” he adds with a shake of his head.

Mr. Dobry was forced to cut back on staff, find new, cheaper suppliers and borrow more money to keep going. His mother stepped up to keep him afloat.

He also boosted his prices from $6 for a burger to $8.50. Inevitably, that prompted a backlash from old customers who had no way of knowing that his costs for each sandwich ($6.25) were higher than the original price he was charging, which meant he was effectively paying people to eat his food.

No matter how brilliant an entrepreneur might be, it’s impossible to simulate real-world conditions in a model. It’s always a learn-by-doing exercise, this thing called launching a startup.

Unfortunately, every business is an experiment until proven otherwise. No matter how brilliant an entrepreneur might be, it’s impossible to simulate real-world conditions in a model. It’s always a learn-by-doing exercise, this thing called launching a startup.

Mr. Dobry soon discovered that adding catering and gift cards to his offerings helped. People love his food, and it wasn’t long before they were asking him to serve up his burgers at their home and office parties and events or buying one of his $25 gift certificates for a friend, client, supplier or family member. An entrepreneur quickly figures out that when someone asks if they can do something, the answer is always, “Yes.”

Not only was Mr. Dobry able to double-load his commercial kitchen on wheels – that is, use it for retail sales during business hours and then to prepare catered meals afterward – he was able to generate revenues, and keep his staff busy, in the off-season. Burger Builder is open only from May until October, which frees up a lot of time for supplying sustenance to the holiday party circuit.

Earlier this year, Mr. Dobry decided to add games and other activities to Burger Builder, creating his own family-friendly mini-Disneyland – in the middle of a Home Depot parking lot, no less. Games include giant Jenga sets and other family-friendly, multi-generational activities.

Now his business model was starting to come into focus.

If Mr. Dobry can sell $350,000 worth of Burger Builder food and beverages in a Home Depot parking lot in Kanata and generate another $150,000 a year through catering, what could he do at locations in higher-traffic areas, especially if he added more attractions and events to his mini theme parks? And what if he took the concept to much larger markets such as Toronto and New York? 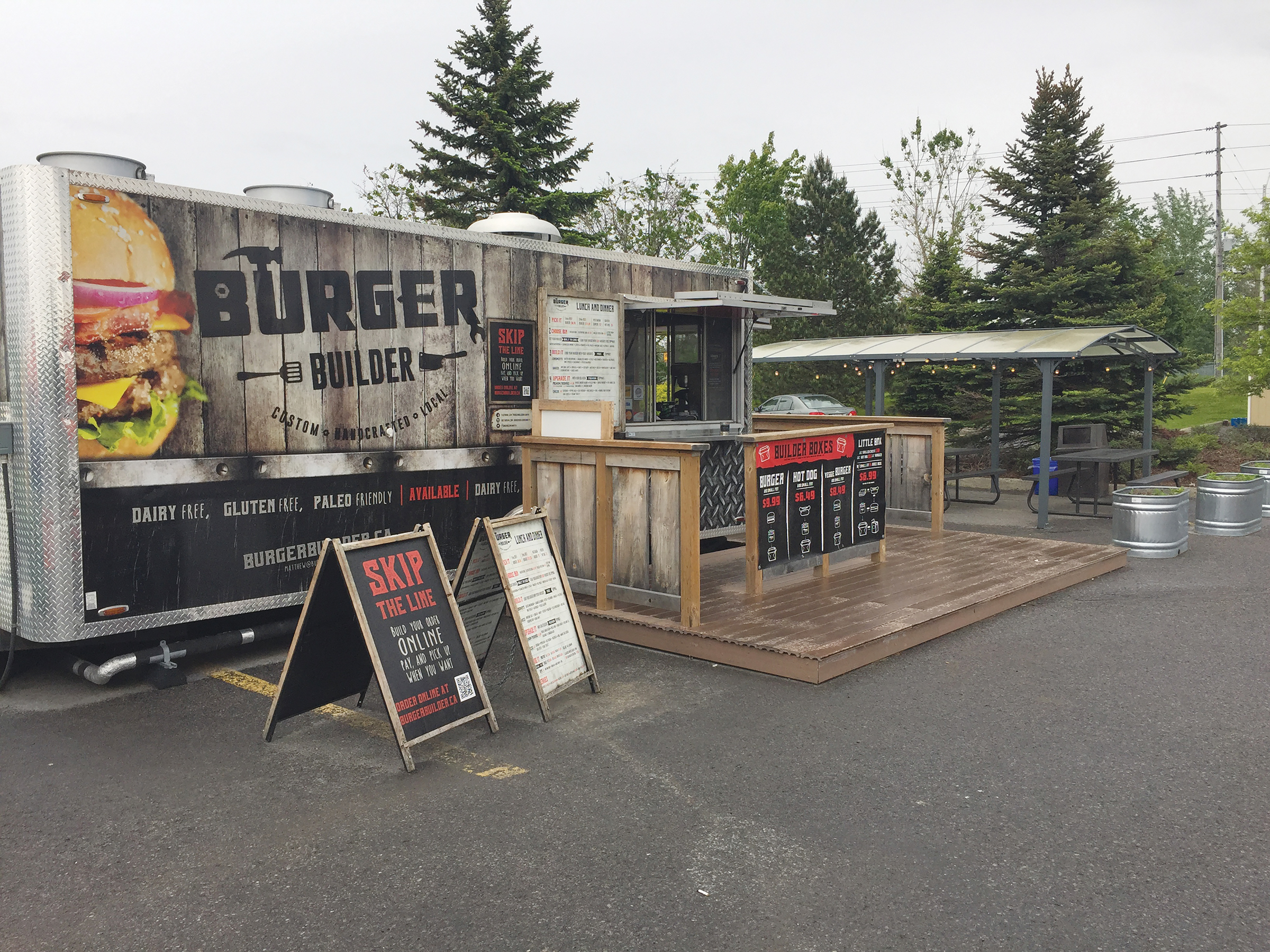 Mr. Dobry believes locations in warmer climates with a longer food-truck season could see sales of $900,000 for Burger Builder and $500,000 for BlackIron. Of course, expansion brings with it a host of new questions related to investment and financing, whether to franchise the concept and the merits of leasing or owning land.

He could expand much faster if, for example, he was to sign a land lease to put one of his mini theme parks in every Home Depot parking lot across the chain. He could also launch a similar traffic-building exercise for major shopping centre developers, many of whom are crying out for new attractions and other ways to revitalize their properties as online retail continues to erode brick-and-mortar’s share of business.

But he and his wife would also like to own some of the real estate under Burger Builder. I suspect his ultimate model will include a mix of company-owned locations, franchises and land-leased operations.

If you do the math, just 100 locations could generate $140 million in annual revenues. Home Depot has more than 2,200 locations worldwide and there are 47,000 shopping centres in the United States alone, meaning the sky’s the limit when it comes to growth opportunities.

What Mr. Dobry and Ms. Mann have done is create a repeatable personal business for life that could be the foundation for a significant real estate play as well.

What makes it sustainable are, in part, the intellectual property of Mr. Dobry’s menu for both Burger Builder and BlackIron, the low startup costs (compared with the costs of building out a restaurant, Burger Builder and BlackIron are far less expensive to launch – probably around $225,000, excluding land, whereas a standard restaurant opening can run anywhere from $750,000 to $1.5 million or more) and the combining of a “this with that” motif. In other words, by adding a games area, the couple has created an opportunity to entertain their customers, not just feed them.

The Burger Builder model combines great food and family entertainment in a format that should appeal to mall owners across North America trying to find ways to entice consumers back to their stores. If Mr. Dobry and Ms. Mann get it right, it could support their family for generations to come.

Bruce M. Firestone is a founder of the Ottawa Senators, a Century 21 Explorer Realty broker, real estate investor and business coach. Follow him on Twitter @ProfBruce or email him at bruce.firestone@century21.ca.