As a longtime professor of business strategy, I have bookshelves full of volumes offering the secrets of corporate success. These books are usually full of tools, templates, best practices and cases of how successful companies have achieved market dominance.

This, however, is not a traditional strategy book. Rather than cases, the authors – all partners at international management consultancy McKinsey – provide an extensive and rigorous empirical analysis of what drives corporate performance. First, it pulls back the veil on what the authors call the social side of strategy. Anyone who has been through a strategy development process has seen the social dynamics at play. Careers, resources, bonuses and egos are on the line. Managers often act in their own best interest. Compromises are made and difficult choices avoided.

The result is often a lack of strategic focus, minimizing the likelihood of bold strategies and big moves. In addition, the traditional strategy process is usually dominated by an internal focus, with companies concentrating on data from their own industry, comparisons with last year’s performance, their immediate competitors, etc. 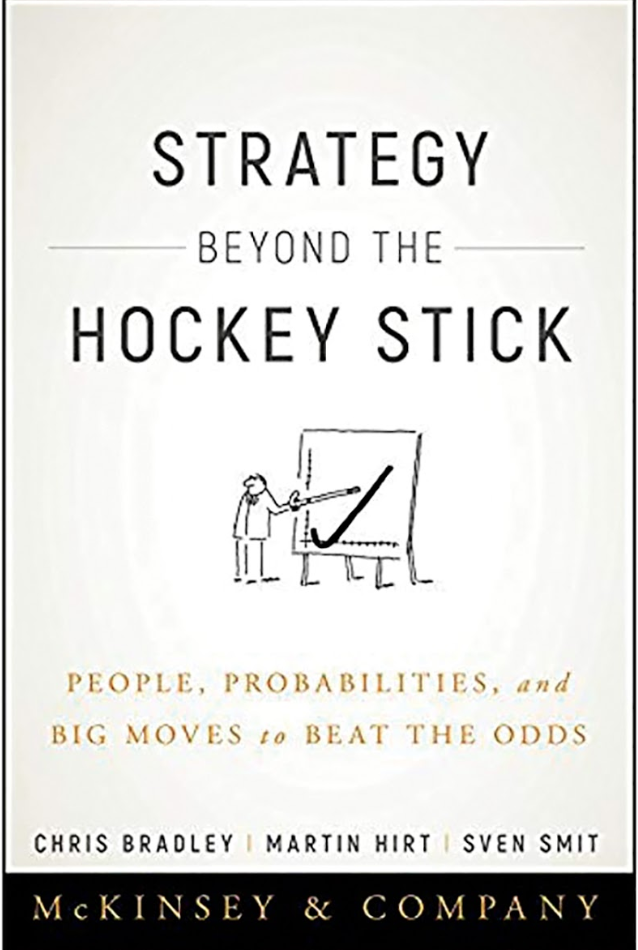 To address both of these issues, the authors contend that strategy is best served by an outside view which takes into account the experiences of thousands of other companies in a range of industries. They provide this outside view by analyzing 15 years of publically available data on 2,393 of the world’s largest companies. In doing this, they discovered a number of factors that accounted for superior corporate performance.

Using economic profit – the total profit after the cost of capital is subtracted – as the measure of competitive success, they plotted the average economic profit of each company over the period. This process identified three discrete groups of companies: a bottom quintile suffering substantial economic losses, a middle group comprising 60 per cent of the companies and a top 20 per cent that captured most of the economic value. It resulted in a “power curve” with tails that rose and fell at exponential rates and long flatlands in the middle.

In analyzing the data, the authors found that real upward mobility on the curve was relatively rare. Only eight per cent of companies in this sample were able to jump from the middle to the top tier over a 10-year period.

What differentiates successful companies from the pack in the middle? First, industry matters.  Almost 50 per cent of a company’s position on the curve related to its industry. It is better to be an average company in a great industry than a great company in an average industry.

Beyond this, the authors also found a number of attributes and actions that increased the odds of upward mobility. Their analysis identified 10 performance levers that were fundamental to achieving corporate success. These were divided into three categories: endowments, trends and moves. Endowments are a company’s starting position and include its revenue size, debt levels and past investments in R&D. Trends include the direction its industry is headed and its exposure to growing markets.

It is a company’s moves, however – what it does with its endowment and how it responds to trends – that were found to make the real difference. Indeed, big moves were the key to moving from the middle to the top tier.

Big moves were even found to cancel out the impact of a poor inheritance. The research found that five big moves, pursued consistently, were the key to outstanding corporate performance: programmatic mergers and acquisitions, the dynamic reallocation of resources, strong capital expenditures, a strong productivity program and investments in differentiation.

Big moves were also found to be most effective when combined. For companies in the middle, the more big moves, the greater the impact. Moves also needed to be big enough to make a difference. To really have an impact on your competitive position, they have to be substantially bigger than the moves other companies are making.

There is a lot to digest in this book. While understanding that strategy is not a purely scientific process, the book provides some interesting and data-driven insights into what it takes to achieve superior corporate performance. It also provides some useful guidance about how the results of this analysis can inform your strategy process and mitigate some of its social dynamics.

Micheál Kelly is dean of the Lazaridis School of Business and Economics at Wilfrid Laurier University in Waterloo and the former dean of the University of Ottawa’s Telfer School of Management.