Kanata North’s bid to transform into a more vibrant mixed-use district took another step forward this week when city council approved Wesley Clover International’s plan to build a 30-storey tower with more than 250 rental apartment units and a restaurant attached to the Brookstreet Hotel.

The investment firm backed by billionaire tech magnate Terry Matthews says it hopes to start construction on the project, which has an estimated price tag of at least $120 million, this fall. The company expects the first tenants to occupy the building in August 2025.

The proposal calls for 253 units in a mix of studio, one-, two- and three-bedroom apartments, Brookstreet Hotel general manager Nyle Kelly told OBJ this week.

The first four floors will be earmarked for furnished executive-style apartments aimed at guests who are in the technology park on business for extended stays, Kelly said.

The upper units will be targeted at groups such as retirees looking for a “turnkey, full-service luxury-style apartment” with a la carte service from the hotel as well as tech workers who want to live close to the office, he explained.

“We’ve kind of shaped it so that we can appeal to a really wide market,” Kelly said.

Units will range from about 550 to 2,000 square feet at a projected rent of between $3 and $3.50 a square foot. Kelly said the highrise, which is being designed by Neuf architects and built by Ottawa’s Ron Eastern Construction Ltd., will have a “hotel feel, but in a residential environment.”

Among its list of five-star features will be a rooftop pool and a 150-seat restaurant on the 28th floor that will include meeting and banquet space.

“The views are going to be spectacular,” Kelly said of the dining facility’s panoramic vistas of the Gatineau Hills to the north and the Marshes Golf Club next door.

Other luxury touches include a fitness facility with a golf simulator and a pet washing station. The main floor will also be home to 2,000 square feet of co-working space.

“As far as amenities go, there’s going to be nothing like this in the city.”

“As far as amenities go, there’s going to be nothing like this in the city,” Kelly said.

The new highrise will be located on a 1.7-acre parcel of land just northeast of the Brookstreet on Legget Drive. It will be built as an extension to the existing hotel, wrapping around the parking structure and adjacent to the stormwater pond. Two levels of underground parking attached to the current lot will have spaces for 111 residents’ vehicles and 128 bicycle racks.

Preparations have already begun for excavating the site, such as relocating the golf course’s pumphouse to the other side of the stormwater pond.

Wesley Clover isn’t the only organization looking to launch new mixed-use developments in Kanata North as part of the tech park’s push to evolve into more of a complete neighbourhood rather than a collection of office towers.

Earlier this year, Finnish telecom giant Nokia filed plans to tear down its existing Kanata North campus – which is located about 700 metres from the Brookstreet Hotel on March Road – and replace it with a new 500,000-square-foot office complex and as many as 11 residential highrises containing up to 1,900 units. 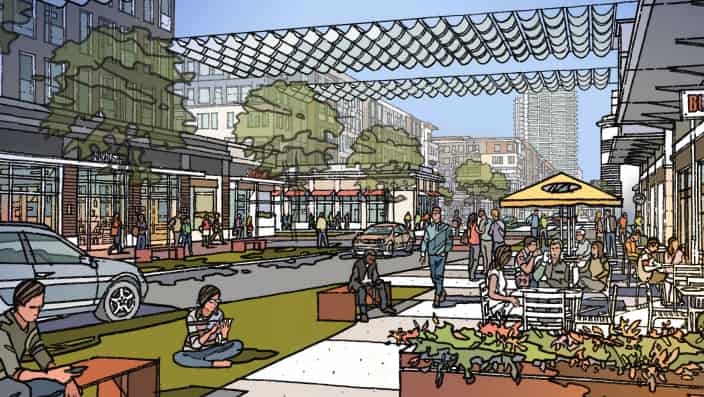 Such proposals are exactly what the Kanata North Business Association was hoping for when it successfully lobbied council last year to designate the technology park a “special economic district” in the City of Ottawa’s latest official plan.

That status loosens zoning rules that had restricted what types of buildings could be constructed in the neighbourhood, which is home to more than 540 companies and has been dominated by glassy commercial highrises for decades.

“Our daily lives include a lot of other elements beyond just that single use of office space,” Petten said.

Kelly agreed, saying the addition of more apartments and amenities like restaurants and fitness facilities will help entice the next generation of workers to take up residence in the tech park.

In anticipation of further residential development, Wesley Clover has already begun drafting a proposal for another mixed-use project on Terry Fox Drive, across the street from the Nokia site.

“That is the goal for sure, to have that kind of live, work, play community here in Kanata North,” Kelly said. “We’re just at the beginning of that.”