A prime piece of downtown real estate a block from a new light-rail station is now in the hands of a Toronto-based developer that plans to construct three highrises containing nearly 900 residential units on the site.

According to a site plan application recently filed with the city, Main and Main wants to build towers of 18, 33 and 38 storeys on the former site of the Alterna Savings and Credit Union at 388 and 400 Albert St. and 156 and 160 Lyon St. 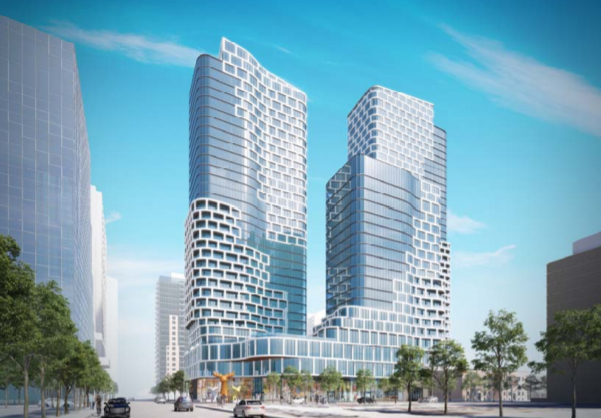 The highrises would include a total of 898 residential suites as well as underground parking for 435 vehicles. The smallest tower would have 140 units, with the others containing 319 and 439 suites.

A three-storey mixed-use podium would connect the 18- and 33-storey buildings, with the entire proposal featuring more than 700,000 square feet of space. The developer also plans to build a park on the northeast corner of the property, which is bordered by Bay, Albert, Lyon and Slater streets. A vacant two-storey building now occupies the 1.5-acre site, with the rest of the property serving as a parking lot.

The coveted parcel of land is located just 150 metres south of the Lyon LRT Station on the new Confederation Line. According to the development application, the proposal calls for “a potential enclosed and elevated pedestrian connection” linking the 18-storey tower on the north side of the property to the new transit station.

The Albert Street site has long been a prime target for development for years, thanks to its proximity to light rail and downtown office buildings.

The latest proposal comes more than two years after the previous owner of the property, Ottawa-based Manor Park Management, had submitted its own plan to build three mixed-use highrises at the site.

Manor Park’s project called for 368 rental apartments and 136 extended-stay hotel suites with underground parking for 365 vehicles. It was also slated to include nearly 30,000 square feet of retail and commercial space “to allow flexibility to attract an urban format grocery store,” according to a consultant’s report filed with the city in 2017.

Before that, Broccolini Construction had expressed interest in rebuilding the site in 2015, proposing a single 27-storey tower to replace the two-storey credit union building. City council approved that plan, which called for 300 rental apartments and street-level commercial space, late that same year, but the proposal ultimately fell through. Manor Park then came up with its plan after acquiring the site from Alterna early in 2016.

The new plan will require the property to be rezoned for additional height and reduced setbacks.