The early morning operation ran so smooth, like butter on a hot crusty roll, as hundreds of prepared dinners were collected Saturday at Chef Ric’s and whisked off to homes across the city for The Ottawa Mission’s virtual fundraiser, Blue Door at your Door.

Graduating students of the non-profit organization’s Food Services Training Program had cooked 300 Canadian-themed meals, all of which had been ordered in advance by Blue Door supporters.

Come nightfall, the public took in a virtual musical concert that aired on CTV Ottawa, featuring a talented lineup of Canadian musicians. Organizers had set their fundraising goal high at $300,000. They managed to reach it, thanks in part to a business sponsorship match of $95,000 that was met.

The Blue Door dinners were prepared by the students at Chef Ric’s, a newly renovated social enterprise on Rideau Street that now serves as a community café, catering business and learning space for The Ottawa Mission to teach unemployed men and women the necessary skills to work in commercial kitchens. The location is named after Chef Ric Watson, director of food services at The Ottawa Mission and the driving force behind the training program.

The non-profit organization started talking a couple of years ago about its dream to expand its Food Services Training Program, which had outgrown its space at The Ottawa Mission at 36 Waller St.

Said Moffatt: “I would have expected that the pandemic, over the past two years, would have caused a delay, but here we are. It’s fantastic.”

This was the fourth year the pair has co-chaired the Blue Door benefit with Ottawa criminal defence and civil litigation lawyer Lawrence Greenspon, helping to grow it from a small grassroots gathering to a well-attended gala presented by Caivan. 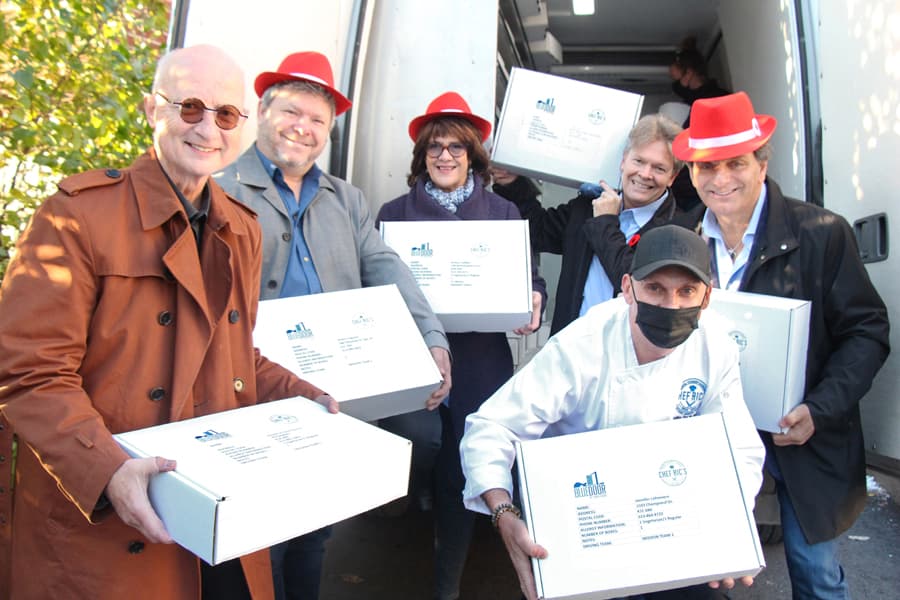 How the training program came to occupy 384 Rideau St. is a story worth sharing. It began over a casual conversation between Peter Tilley, CEO of The Ottawa Mission, and now-retired BLG partner Marc Jolicoeur, who was curious about the progress on the proposed expansion plans. At that time, the organization had looked at several potential sites but all had fallen through.

Jolicoeur introduced Tilley to Avison Young managing director Michael Church, who introduced Tilley to property owner Lalit Aggarwal, who agreed to lease the vacant space (formerly the Rideau Bakery) to The Ottawa Mission for next to nothing, provided it took care of the renovations. The community stepped up and helped with costs.

Thyme & Again also used its connections, bringing in designer Tania Kratt and local contractor Jim Gunn to assist. Thyme & Again is among local businesses that hire graduates from the training program to come work for them.

While the Blue Door event doesn’t raise money exclusively for the training program, it is a featured part of the event because of the students’ involvement in preparing the meals. They also share their stories of how the program helped them turn their lives around. Proceeds from Blue Door help The Mission provide food, shelter and clothing to people in need, as well as support clients in the areas of health, mental health, education support and job training.

Whyte and Moffatt were busy Saturday night catering the Sobey Art Award gala held at the National Gallery of Canada, but Greenspon and his wife, Angela Lariviere, senior vice-president of marketing for HEXO Corp., hosted friends and neighbours at their Manotick home. Guests included Scotiabank vice-president Frank Bilodeau and his wife, Steffanie.

Longtime supporters Michael Scrivens, partner at Scrivens Insurance and Investment Solutions, and his wife Heather Bradley, longtime director of communications for the Office of the Speaker of the House of Commons, also held a Blue Door dinner party at their Glebe home. Among their guests was Pelican Seafood Market & Grill co-owner Jim Foster, who was instrumental in helping The Mission secure a food truck. It’s now serving more than 3,200 healthy and hearty meals each week to individuals and families living in low-income neighbourhoods.

The Mission wants to purchase a second food truck that will allow the organization to expand its reach even further.

“The food insecurity is unbelievable,” Chef Ric told OBJ.social. “It’s sad to see all these people waiting in line to get their meals.” 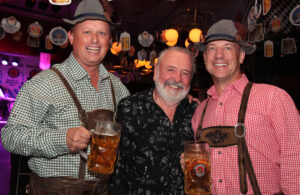 Nicholson, who’s been on the organizing committee, as well as a sponsor, for the past several years, is stepping up to chair the Blue Door event next year. Meanwhile, Whyte, Moffatt and Greenspon say they will remain involved. In fact, they’re keen to see The Mission’s Food Services Training Program adopted by shelters in other major Canadian cities.

“My hope is to take Chef Ric’s on the road,” said Greenspon. “This [program] is actually taking homeless people and turning them into full-time employees in an area where they want to work. It can’t get any better.”

The Ottawa Mission Foundation served as headquarters for staff and volunteers who spent the evening collecting phone donations during the pledge drive. Among those answering calls was Judy Valz, vice president of corporate communications for the Canadian Bank Note Company. It was also one of the sponsors of Blue Door.