Few people have had a better vantage point from which to witness the maturation of Ottawa’s music industry than Mark Monahan.

When the artistic director of Bluesfest launched the event on a shoestring budget of $100,000 in 1994, it was touch and go as to whether enough local music fans would shell out the $5 admission fee to ensure the three-day festival wouldn’t drown in a sea of red ink.

This year’s edition of what’s now a 10-day event drew more than 300,000 music lovers to LeBreton Flats to rock out to the likes of the Foo Fighters, Beck and Bryan Adams.

Bluesfest is now a mini-industry in itself, with 15 full-time employees and an annual budget of more than $17 million.

So when the man behind Bluesfest’s meteoric rise says Ottawa is coming into its own as a music city, it’s an opinion worth listening to.

“I think that what’s happening in Ottawa right now is that non-music industries and people are taking note of how important the live music scene can be ​– not just in supporting local musicians, but what it means to the city in terms of quality of life, what it means to tourism, what it means to economic development,” Monahan says. 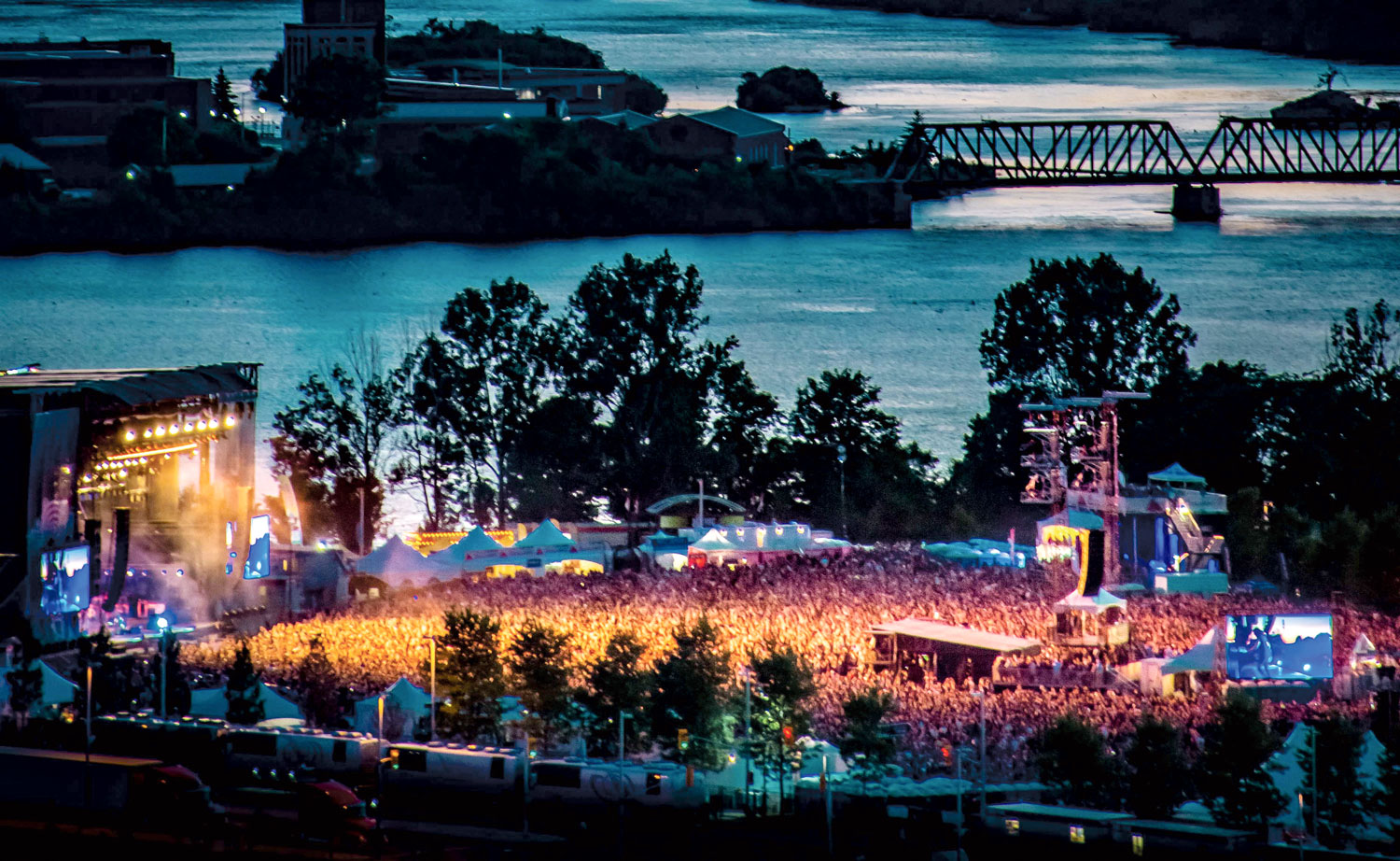 The music industry’s total impact on Ottawa’s economy is hard to pin down, but an economic analysis of live music in Ontario three years ago pegged the industry’s contribution to the province’s economy at about $1.2 billion, including more than $430 million in taxes.

Here in Ottawa, research firm Acuity estimates that Bluesfest alone pumps $30 million into the city’s economy each year, money that festival-goers spend on everything from hotels to restaurants to taxis and retail outlets.

Monahan says city leaders are waking up to the industry’s importance.

He points to city council’s recent adoption of a three-year music strategy designed to cut red tape and fund advocacy groups in an effort to better promote local artists and the businesses that cater to them.

“These are things that I think with the development of the (music) strategy and some of the resources, we’ve really helped to convince city council, businesses, Ottawa Tourism all to start to look at (the industry) in a different way,” he says. “Ten years ago, that never would have happened.”

Still, cutting a bit of red tape won’t change the fact that running a live music venue in Ottawa is a tough go at the best of times, says one local nightclub owner.

Former touring musician Luke Martin, the owner of Capital Rehearsal Studios, echoes those thoughts. The 10,000-square-foot venue, which has been operating in the City Centre complex since 2012, offers practice space to about 100 musicians who rent rehearsal rooms by the month.

“There have been months where it wasn’t as good as the month before and then you do all right the following (month),” says Martin, who also publishes a monthly newspaper devoted to the local music scene called Ottawa Beat.

“There’s not a ton of money in this particular industry, so it’s really a matter of figuring out what works. To be honest, I’m still figuring that out. If I have a very slow month, my teeth chatter a little.”

Most clubs that rely on live shows for most of their revenue are struggling, he says, while those that are bars or restaurants first and music venues second such as Bar Robo or House of Targ fare better.

“It’s an extremely difficult business,” says Martin, who estimates there are about 100 establishments that offer live music within a 45-minute drive of the city. “There’s a lot of competition.”

Monahan, who was in the nightclub industry in the late 1980s and early ’90s, agrees the business is more a labour of love than a path to fame and fortune.

“No one is making any money running a live music venue,” he says flatly. “So these venues exist because of the will and emotional attachment of individual entrepreneurs.”

Evenchick says industry players need to do a better job of working together to promote local establishments.

To the end, he’s proposing that major festivals such as Bluesfest feature more off-site programming at local clubs, including daytime artist workshops and evening performances curated by festival organizers.

“There’s not enough people going out to shows most of the year,” says Evenchick, who works at a shoe store and books acts at other venues to help supplement his income. “It’s an ongoing struggle. I think this would be one idea that would help with that.”

The music strategy was one of three key recommendations from a provincially funded 2015 report called Connecting Ottawa Music: A Profile of Ottawa’s Music Industries.

The study concluded that although the city was blessed with an abundance of musicians, the local industry as a whole wasn’t living up to its potential. In addition to a municipal strategy to grow the city’s music business, it also called for an industry-led organization to bring together various players in the local music scene as well as a point person to help spearhead the music strategy at City Hall.

All three recommendations have since been implemented.

“People started realizing there could be a music industry in Ottawa”

Formed in 2015, the non-profit Ottawa Music Industry Coalition now has more than 180 members who work with the city to promote the industry and run programs and seminars to help musicians and music-related businesses boost their skills in everything from accounting to booking shows. In April, the city hired Sabra Ripley, the founder of the House of PainT festival, as its new “music officer” to act as a liaison with the industry.

Evenchick says the 2015 report was a catalyst for growth because it put music on the map as an economic driver in Ottawa.

“People started realizing that this could actually be an industry in Ottawa,” he says during an interview at his downtown club, which seats about 70 people and hosts three to four music acts each week in addition to comedy shows, musicals and other live performances.

One of the music strategy’s key planks – a special permit issued to live venues that will allow musicians and technicians to park on the street and unload equipment without being ticketed – is expected to launch in August.

Although the permit might not sound like a big deal, it sends a message to club owners that the city is taking the music business seriously, Evenchick says.

“For us, it’s great because it means artists aren’t going to have to lug their gear up the street,” he says. “They have the sense of security they’re going to be able to pull up right away and be able to unload their gear and not have to worry about it all day. It does represent a change in mentality at the city, that they’re willing to work with us on that.”

The city’s music strategy also urges industry officials to explore the viability of a mid-sized downtown venue that could seat about 1,000 people and be configured for a variety of types of performances, saying the lack of such a facility is “an obstacle for Ottawa’s growth as a music city.”

Martin says he thinks such a concert hall could hold its own in the capital, but says the proprietor would probably need to own the building outright to retain as much incoming revenue as possible.

“I think it’s doable, but I think ultimately it would take somebody that is willing to invest three or four years of their time and money to make sure that it ends up being something good,” he says. “You need deep pockets and you need to be passionate – and get the right people involved.”

Evenchick, however, says the jury is still out on whether Ottawa could support such a venue.

“I think we’re a long way from being able to program enough events in a room that size for it to actually be sustainable financially, unless the city were to help out with grants or subsidies,” he says.

Still, the passionate music fan says he believes Ottawa’s appetite for live shows at smaller clubs is healthy and, given enough encouragement, will expand enough to keep his business viable.

“Now’s a great time to get into the industry in Ottawa, because I think it’s just going to grow from here,” he says.

“When you come in here on a night when there’s 70 people in there and the band’s having a great time and the bar is selling lots, it sort of reinvigorates you and reminds you why you’re doing it.”

OBJ’s rejected headlines for this story: