A self-driving shuttle van is set to hit the road at Tunney’s Pasture in a first-of-its-kind trial that local industry officials hope will cement Ottawa’s position as a global R&D hotbed for autonomous vehicle technology.

The $500,000 pilot project, the first under the Ontario Automated Vehicle Testing Program, will run from Nov. 3-13. It will see a six-person electric vehicle built by European firm EasyMile travel a four-stop, 1.5-kilometre loop around the Tunney’s Pasture campus at speeds of up to 15 kilometers per hour.

The shuttle will travel a pre-programmed route using sensors and artificial intelligence software to keep track of its surroundings and detect obstacles. An operator will be on board at all times to take control of the vehicle if necessary.

While Invest Ottawa and its technology partners have previously run trials of automated shuttles on a custom-designed route at the Area X.O test facility in the city’s south end, the new project will put the autonomous vehicle through its paces in a more complicated real-world setting.

The trial will also showcase technology from a pair of local startups. 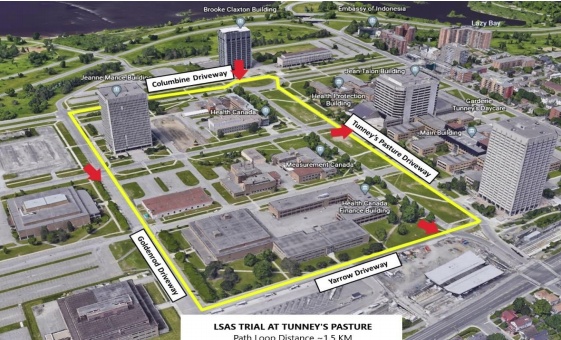 Smart-sensor manufacturer SmartCone’s AutoGuardian system will send out alerts warning pedestrians and other vehicles that the shuttle is approaching and remind passengers to don masks before boarding.

“It’s really great to be able to have that capability to prep us for larger deployments,” said AutoGuardian CEO Tenille Houston.

Meanwhile, members of the general public will be able to book rides on the shuttle through Ottawa-based startup RideShark’s platform.

Up to five people who live in the same household can register for a limited number of pre-scheduled rides on a first-come, first-served basis. Employees working at the Tunney’s Pasture complex can also hop on the shuttle without a reservation.

Tremblay said Invest Ottawa aims to run up to eight similar pilots annually on public roads over the next couple of years as the agency and its partners refine technologies used to make self-driving cars safer and more efficient.

“We certainly do hope to see many more,” he said.

Noting that the autonomous vehicles industry is expected to be worth up to $60 billion globally by 2030, Tremblay said Ottawa ​– with its wealth of embedded software and cybersecurity know-how ​– is poised to be a major player in the sector. He said more than 100 organizations in the capital region are already involved in the industry, adding he expects that number to just keep rising.

“The goal is to build up more and more capability locally with our domestic entrepreneur base and continue to attract investment from foreign investors into our region,” he said. “If you want to go after a $60-billion market, that’s one way to go after it.”

The news of the historic shuttle trial comes just weeks after the federal government announced it was investing $7 million into new technology at Area X.O, formerly known as the L5 track.

In addition, private-sector partners such as Accenture, BlackBerry QNX, Ericsson, Microsoft and Nokia as well as the City of Ottawa will contribute up to $10 million in equipment and services at the 16-kilometre gated facility on Woodroffe Avenue.

Invest Ottawa, which manages the facility, said the investment of cash and material will create as many as 200 new jobs and make the nation’s capital a world leader in the development of self-driving vehicle technology.