The builder of the city’s tallest highrise is upping the ante with its latest development proposal – a 60-storey tower in Little Italy that would soar more than 40 metres above the current record-holder.

Claridge Homes has filed an application to construct a mixed-use residential and retail complex at 829 Carling Ave., on the northwest corner of Preston Street, that would top out at 188 metres. The site is directly across the street from another Claridge development, the 45-storey Icon condo tower that’s nearing completion and now holds the title of Ottawa’s tallest building at 143 metres.

Designed by Toronto’s Hariri Pontarini Architects, the new project would include a total of 459 residential units along with about 2,800 square feet of ground-floor retail space and a “tree-lined promenade” that would connect Carling Avenue and Preston Street.

A combination underground-and-above-ground parking garage integrated into the building would have spots for 385 vehicles and 230 bicycles. An amenity space on the eighth floor would feature a patio, pool, gym and fitness studio as well as theatre, entertainment and meeting rooms.

The 0.4-acre site is located in the heart of what’s become ground zero for a spate of lofty mixed-use proposals. 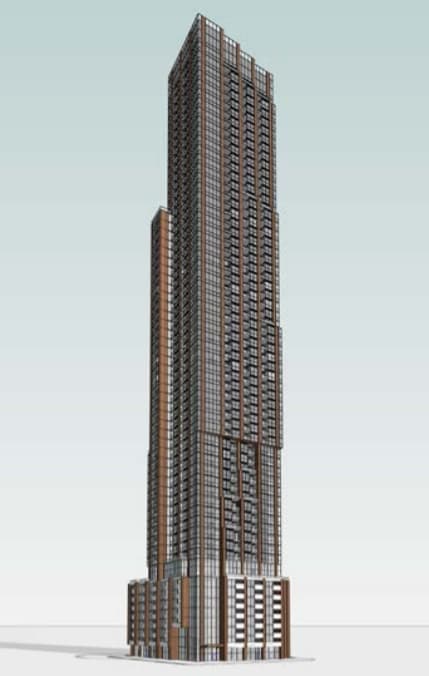 He noted the city has already opened the door to “super-tall buildings” in the neighbourhood after green-lighting projects such as the Icon and Richcraft’s proposal for a trio of towers as tall as 55 storeys just down the street at 845 Carling Ave.

Just a few hundred metres to the north, Trinity Development Group is aiming even higher, spearheading a plan to construct a multi-tower project near Bayview Station with two highrises that would be more than 200 metres tall.

“The reality is we’ve got a real shortfall in (residential) units in Ottawa,” Malhotra said, adding market demand will determine whether the project will be a rental or a condo building.

“We’re going to need bigger, bolder projects to try and address the housing supply shortage that we have in our market.”

Somerset Coun. Catherine McKenney, who represents the area, agreed height likely won’t be an issue with nearby residents.

McKenney said the neighbourhood is already home to a number of highrises, with more in the development pipeline. Residents also stand to benefit from potential investments in local greenspace that Claridge could make in exchange for increased height and density, the councillor added.

“That’s where you want intensification,” McKenney said of the Carling-Preston corridor. “I don’t see this (proposal), at least now, as being overly contentious.”

Still, McKenney is concerned about the project’s potential traffic impact, arguing the proposed total of 385 parking spots is “far too many” for a building that’s located less than a block from the Trillium LRT line and just north of the proposed new Civic Hospital campus.

“We accommodate that kind of height because it’s (near) light rail,” they said. “You can’t come back then and ask for excessive vehicle parking. That’s something that we’re going to have to look at.”

Malhotra stressed that nothing is written in stone, noting that certain aspects of the plan such as the parking and public-realm components could be altered after consultations with city staff and the public.