OBJ.Social is supported by the generous patronage of Mark Motors.

Ottawa businessman Charlie Saikaley and his wife, Majida, threw a party Wednesday night that really packed a punch, raising more than $225,000 to help the people of Lebanon rebuild their lives following tragedy.

The couple hosted a small and intimate Lebanon Disaster Relief Fundraiser at their astonishingly beautiful new home. They capped the number of guests at 50 and kept the two-hour reception strictly outdoors to limit the possible spread of the COVID-19 virus.

Lebanon’s ambassador to Canada, Fadi Ziadeh, donated the wine and was among the dignitaries in attendance. Other special guests were David McGuinty, Liberal MP for Ottawa South, and Mayor Jim Watson.

Saikaley was assisted in his efforts by well-connected volunteer fundraisers Gary Zed and Ottawa obstetrician Dr. George Tawagi. Attendees were asked to make a minimum donation of $2,500 per person or $5,000 per couple. There were many supporters who still gave money despite not being there. Moreover, it wasn’t just Ottawa’s Lebanese-Canadian community stepping up; donations came from a cross-section of people from the business community.

“I’m pleasantly surprised; everyone really came together,” Saikaley told OBJ.social early in the evening, as guests started filing into his backyard.

Saikaley hoped to raise $225,000, and by Thursday it was looking as though they were going to exceed that goal.

The Saikaleys’ property is so spacious that it’s practically made for social distancing. It also backs onto the Rideau River, where boaters of all kinds were seen cruising by toward nearby Mooney’s Bay.

All the bite-sized servings of falafel, tabbouleh, prosciutto-wrapped dates and other food were courtesy of Ottawa caterer Shirley Kouri of Peridot45.

“We did our homework to make sure we’re giving money to the proper organization,” said Saikaley, who’s retired now as a real estate and business law partner at Perley-Robertson, Hill & McDougall LLP. He continues to own and operate a property management firm and recently became a grandfather for the first time.

Saikaley got a helping hand from his four grown daughters in organizing the fundraiser. The family also donated a combined $27,000 to the cause. 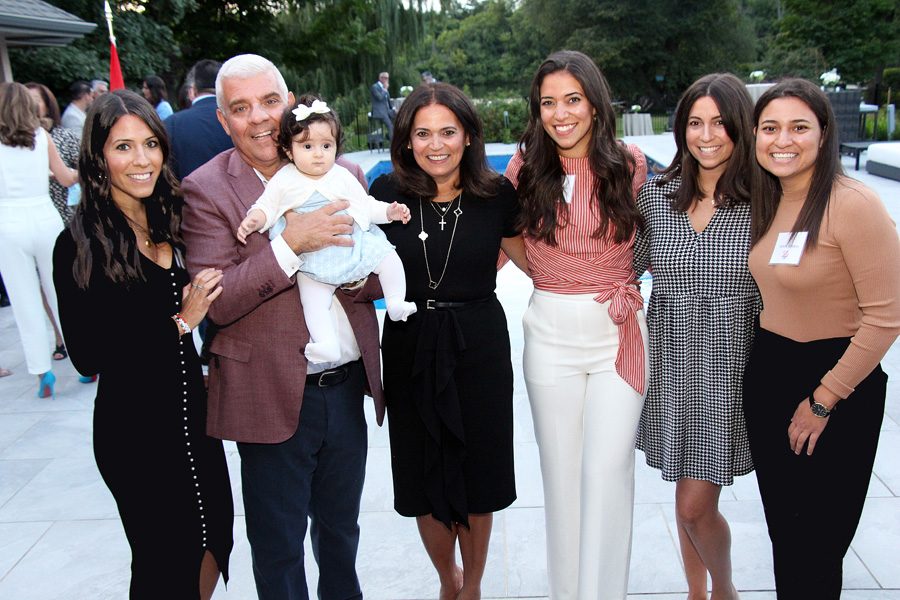 On Aug. 4, a massive explosion hit Beirut, the capital of Lebanon. Besides the number of dead and wounded, the blast was devastating to buildings, infrastructure and people’s livelihoods. The city remains desperate for food, medical supplies and other basic necessities.

The ambassador thanked the Saikaleys “from the bottom of our hearts for organizing this fundraiser to help your motherland, Lebanon.

McGuinty told everyone how genuinely happy he was to be in attendance, mentioning how several of his family members married into “warm and loving” Lebanese families. He spoke about the actions the federal government has been taking to assist Lebanon, such as announcing $30 million in humanitarian and recovery aid.

“To be clear, all the support from the federal government is going to trusted humanitarian organizations and not directly to the government of Lebanon,” said McGuinty, alluding to concerns of political corruption in Lebanon.

In case anyone is wondering, cheek kissing, embracing and handshaking were a big no-no that night, replaced with some friendly elbow bumps.

“I want to hug you, but it’s so wrong,” Meera Dilawri was overheard telling Liza Mrak, executive vice-president of Mark Motors Group, as they greeted one another sans physical contact.

Guests did come equipped with masks, but their use was understandably short-lived after the coverings got in the way of eating, drinking and talking.