And, closer to home, a Spencerville entrepreneur was expanding his technology services business from the ground level, taking to the air and setting the stage for exponential growth over the next decade and a half. Joe Moulton began his professional journey in the tech world in 1997, teaching at a private school where he trained adults to be Microsoft network and telecom technicians.

“Back then it was Windows 95 and Novell NetWare,” the owner of JoeComputer reminisces. “The first Pentium computer had just come out and I splurged on a ridiculously big 10GB hard drive.”

Always growing forward in the industry, Moulton graduated from teaching to providing computer sales and repair from his home-based shop in the nearby town of Ventnor, about 45 minutes south of Ottawa. With both his business and the tech industry on the upswing, JoeComputer had flourished by 2005 to the point where Moulton could justify renting retail space on the main street of the village in the former Spencerville Hotel building, a property Moulton now owns and from which he runs multiple ventures.

“In 2006, I started the wireless internet part of the business servicing Spencerville, Prescott and Johnstown. We had 55 customers the first year,” Moulton recalls.

JoeComputer quietly exploded into an internet provider that encompasses a geographical area stretching from Brockville to Morrisburg, northward from Merrickville to Mountain and includes service in the Addison, Delta and Burritts Rapids regions. 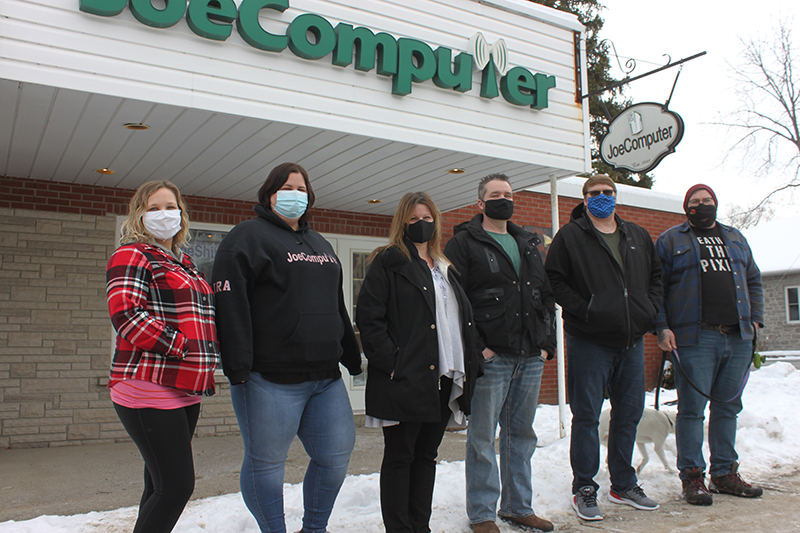 And more is on the horizon.

“We continue to expand into underserved areas,” Moulton says. “We get requests for service in areas where people have no high-speed (internet access) and we do our best to help by looking for tower locations that are feasible in those areas,” Moulton explains.

Xplornet and Bell are the two major providers in the region. In smaller-population urban areas such as Prescott and Cardinal, cable and DSL are available but are tied to infrastructure cost limitations. Once outside the (larger) city limits, wireless becomes the more viable economic option relative to the high fixed costs of running expensive cables and equipment long distances to serve a sparse customer base.

Competing against large corporations, with their support centres in another province or country, Moulton credits his “local” appeal as a major factor behind his market penetration.

“Our customers tell us our local support staff understand the needs of our customers better and are more responsive,” Moulton says.

As he grew JoeComputer, Moulton leveraged his growing personal brand to help him expand into new businesses, expanding his personal home gym into a commercial venture, JoeGym.

He built on that with JoeShirt, a custom apparel creator, and Joe’s SpencerCity Bar and Grill.

“If people have a good experience with one of the Joe’s establishments, they can expect the same with all of them,” Moulton reasons. “I am proud of what we have built. It is a team effort and takes all our staff to dedicate themselves to making our customers happy.”