Sometimes, doctors’ roles as health care heroes can extend beyond the walls of a hospital.

Take Dr. Rohit Gandhi, for example. He recently got married. At his wedding reception in the Toronto area, the emergency medicine doctor and researcher at Montfort Hospital got to talking with one of his parents’ friends, Ottawa businessman Anand Aggarwal, about all the good work being done at Montfort.

Aggarwal happens to be a partner at Infinity Convention Centre, a special events venue in Ottawa that hosts a big gala for a different local charity each year. Aggarwal must have liked what he heard because, when it came time for Infinity to select this year’s beneficiary, it chose Montfort Foundation.

“We feel privileged,” Marc Villeneuve, president and CEO of the Montfort Foundation, told OBJ.social shortly after arriving at Infinity for a Bollywood-themed evening of cocktails, dinner, live entertainment and dancing.

Montfort Foundation received a ceremonial cheque later that night for $100,000. The amount came as “an incredible surprise” to Villeneuve. “I’m just so happy,” he said afterward. “This gift is way beyond our expectations. For us, its impact will directly reach our patients.”

Present were Aggarwal, his wife Saroj, their son Lalit, president of Manor Park Holdings, and the Sohal family, who are also co-owners of Infinity. 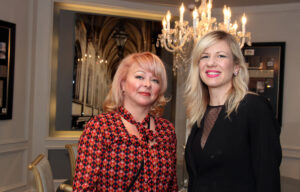 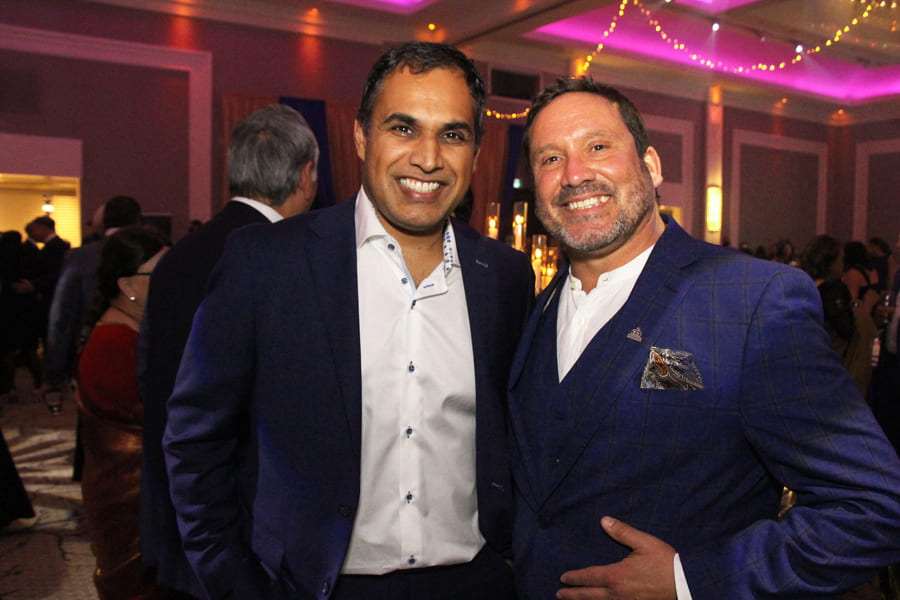 Local developer Richcraft, owned by the Singhal family, was the event sponsor that night. The Singhals and Aggarwals are such close friends that founder Kris Singhal is known as “Uncle Kris” to Lalit. “Their generosity is unparalleled,” Lalit said at the podium while praising the humility shown by Singhal and his wife Manju as “something to aspire to.”

From structural engineering consulting firm Cleland Jardine were Mike Cleland, Bob Jardine and Brian Johnson. Their company was a major sponsor, along with general contractor Westview Projects, represented by president Seth Richards and his partners, including 2021 Forty Under 40 recipient Ken Jennings. 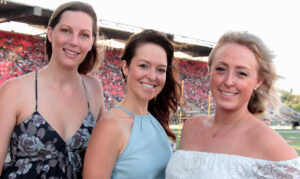 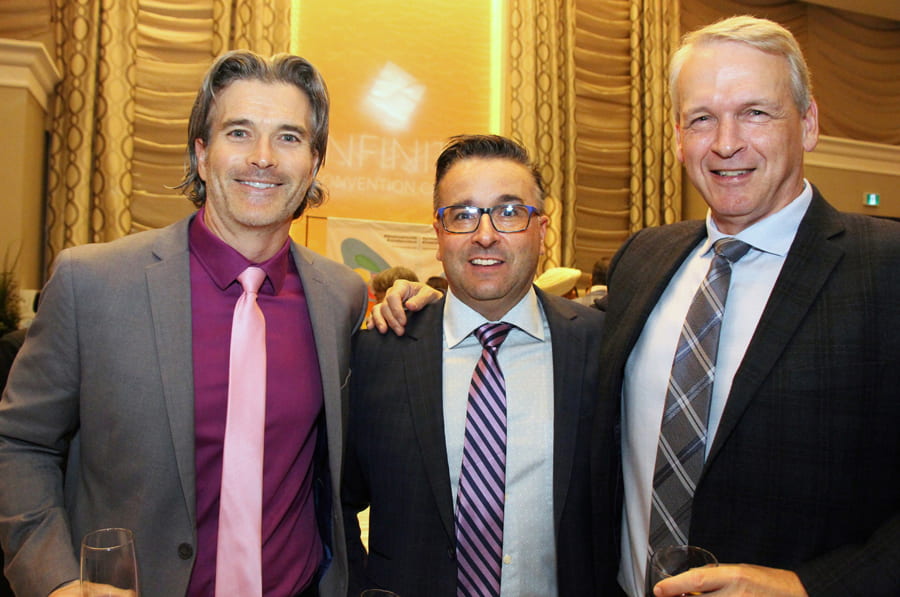 Dozens of other businesses and members of the local Indo-Canadian community also stepped up to support the event through sponsorship and the buying of dinner tables. “When Mr. Aggarwal calls, you say ‘Yes’,” explained Vijay Tejuja, who used to be part of the grassroots Dhadkan Group with Aggarwal, back when it raised millions for the Heart Institute. Tejuja described Aggarwal as a “key person” in bringing Ottawa’s Indo-Canadian community together with the broader community.

VIPs included Indian High Commissioner Ajay Bisaria and Treasury Board President and Ottawa-Vanier MP Mona Fortier, who was born at Montfort Hospital. Ottawa-Vanier MPP Lucille Collard and Rideau-Vanier Ward Coun. Mathieu Fleury were also among the special guests, as was Catherine Bélanger, whose late husband, former Ottawa-Vanier MP Mauril Bélanger, was a tireless defender of the rights of Francophone minority communities before he passed away in 2016.

Attendees had to show proof of COVID-19 vaccination to enter the building. There were free masks available at the front door, and guests were reminded throughout the evening to wear them.

With close to 600 people in attendance, the event helped to raise the profile of a health care facility that was, in the late ‘90s, at risk for closure during the Mike Harris era. It took rallies, lobbying and court battles but the Franco-Ontarian community saved the hospital.

Montfort, which is fully bilingual, has since expanded significantly in size and scope. Today, it provides 20 percent of all health care services in Ottawa and is also a francophone teaching and research hospital.

“Montfort is no longer that little hospital in the east end,” Villeneuve told the room proudly.

The hospital foundation was behind the fundraising for the brand new $88-million Orléans Health Hub, which puts bilingual specialized and community-based care for people in the east end under one roof. As well, the hospital recently announced a new partnership with Wabano Centre, with the goal of improving health care for the region’s Indigenous population.

As for Dr. Gandhi, he attended the Infinity Cares Gala with friends, family and, of course, his new bride, Neeru. “For me, it’s so refreshing to see the Indo-Canadian community embracing the francophone hospital,” said Gandhi, who also has a background in business. “Personally, I think that’s a huge step forward to sort of bridge that gap. I don’t think there’s ever been an Indian event where they’re speaking French. So, it’s pretty nice that way.”

Infinity, which first opened its doors in 2016, has supported through its annual galas the Ottawa Regional Cancer Foundation, Bruyère and The Royal Ottawa Mental Health Centre. The gala didn’t take place in 2020 due to the COVID-19 pandemic. 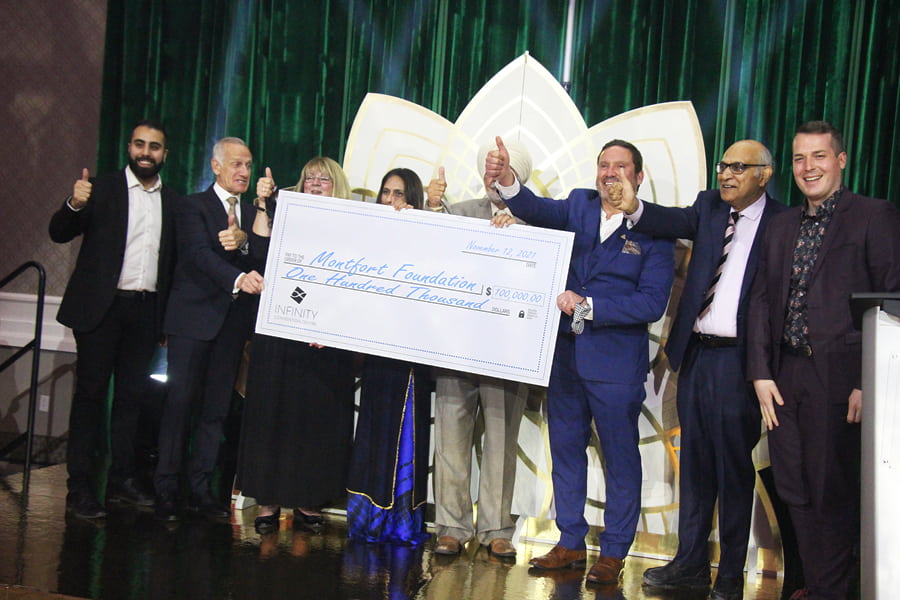 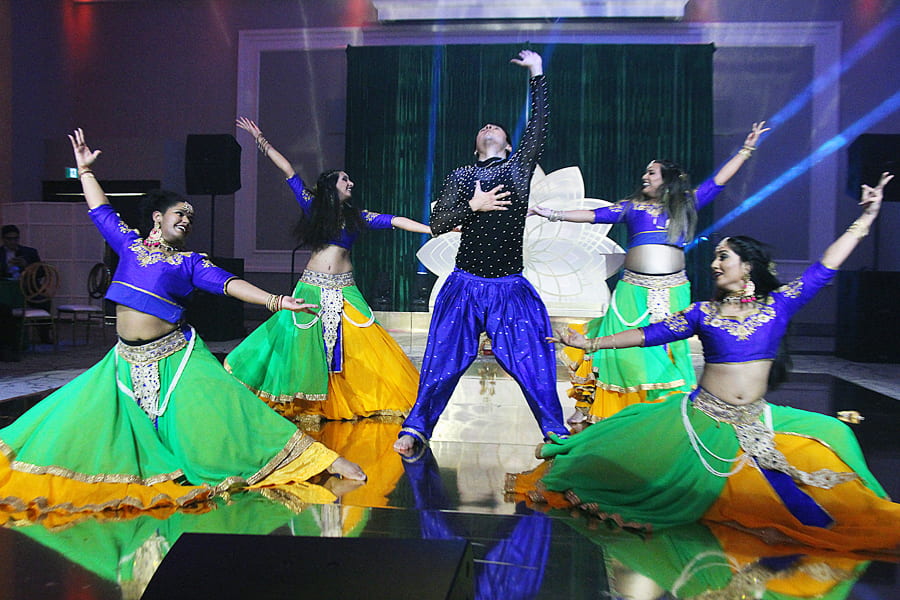