There’s no place like home — if you can afford one.

The gathering was part of the GOHBA Breakfast Series and included members from BOMA (Building Owners and Managers Association) Ottawa. The sold-out event, which drew about 150 attendees, was held at Centurion Conference & Event Centre. It was sponsored by Tomlinson, which was represented at the breakfast by its senior vice president of planning and development, Rob Pierce.

GOHBA, which has more than 360 members, was eager to hear the candidates lay out their detailed vision for the future of housing in Ottawa, said Burggraaf, who had the data to show how the housing supply has been decreasing over time relative to the population.

The number of people who call Ottawa their home is expected to grow by about 500,000, or 50 per cent, within the next 25 years. The rising population, along with a shortage in land supply, is contributing to the city’s housing affordability crisis, said GOHBA board president David Renfroe, president of Renfroe Land Management. “It’s good to see all the candidates discussing housing affordability, but right now what we need is leadership; we need leadership from the mayor and from council to address housing affordability.” 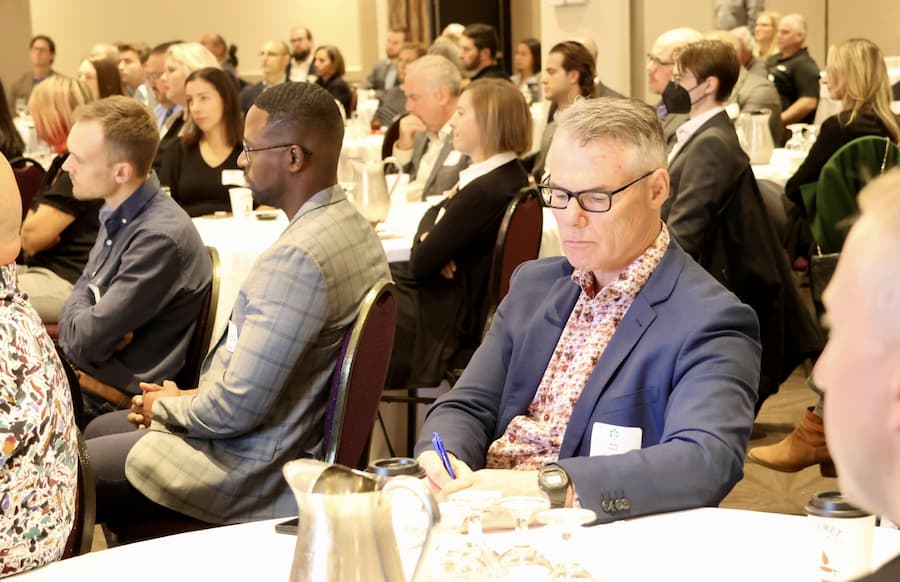 The candidates took turns answering a series of six questions that dealt with a variety of topical issues, including residential intensification, building more affordable housing near transit stations and reducing bureaucratic red tape faced by developers. There was also general acknowledgement over such things as a looming recession, challenges with the city’s light-rail transit, and a downtown core that hasn’t yet recovered from the pandemic.

McKenney, who has represented Somerset Ward as a city councillor since 2014, identified the relationship between the City of Ottawa and the local builders as “one of the most important we have”.

“It is council’s role, the city’s role to ensure we have a great city. It’s your role to build the homes that make up our neighbourhoods,” McKenney told their audience. “We have the same goals, essentially, as a city.”

McKennney spoke about building communities that offer reliable and affordable transit, green spaces, and recreation services, libraries and other amenities.

“I’m running for mayor to make Ottawa the healthiest, the greenest and the best-connected city in Canada,” they said. “Everywhere I go people tell me that they’re ready for change, and that they see the potential in this city, and together we will create vibrant neighbourhoods that make us proud of where we live.”

Sutcliffe spoke about his plans to waive development charges and fees, in certain cases, in order to make it more attractive for builders to create more affordable housing. He set out his plan to build 100,000 new homes over the next 10 years, including 10,000 affordable homes. He also said he will prioritize smart intensification while respecting community design plans.

“We have to make sure we’re not blocking development that’s going to achieve intensification,” he said, citing the example of developers’ plans to build a 300-unit residential tower, resulting in the loss of a six-unit building on Nepean Street. “To me, that is a gain of 294 units, and it’s smart intensification.”

The entrepreneur and co-founder of the Ottawa Business Journal also wants to make the application and approval process easier for developers so that they can better keep up with the demands to build more housing.

“The reality is, if we don’t make the right decisions and achieve the right kind of growth within Ottawa the growth is going to happen right outside of Ottawa,” said Sutcliffe, who was the only candidate to speak in both official languages. “We’re going to see communities like Arnprior and Rockland and Kemptville growing because it’s more affordable for people to live there, or homes are being built there more quickly. We’re going to have more and more sprawl and we’re going to have all kinds of challenges moving forward. We’re going to have people who are coming into Ottawa every day, using our services but they’re not paying for them because they’re paying taxes somewhere else.”

Chiarelli spoke about his interest in working with the federal government to create between 5,000 to 6,000 more affordable housing units on publicly owned land at Tunney’s Pasture and Confederation Heights. Chiarelli is the most experienced politician of the three candidates. He’s a former mayor, regional chair and provincial cabinet minister.

“I believe it’s extremely important for the new mayor and GOHBA to work together,” said Chiarelli. “The new council will have a large number of first-time politicians who may not recognize the importance of working together with the industry. Having an experienced mayor will be critical to creating that spirit of cooperation.”