A Montreal firm that’s planning to convert a ByWard Market heritage site into a hotel and build an adjoining apartment complex wants to construct a highrise containing rental apartments and hotel rooms on another coveted piece of downtown real estate.

Rimap Development is proposing a 35-storey tower at 395 Slater St. that would include about 270 rental units and 230 hotel rooms. Co-president Marc Varadi said the company bought the half-acre site from Toronto-based developer Main and Main late last year and is now ironing out the details of the project.

“It’s still a work in progress,” he told OBJ.

The property is part of a larger plot of land bordered by Bay, Albert, Lyon and Slater streets that Main and Main purchased in 2018 from Ottawa-based Manor Park Management. The former site of the Alterna Savings and Credit Union is about 100 metres south of the Lyon LRT Station and was among the last significant vacant plots of land available for development in the downtown core.

The Toronto firm originally planned to build three highrises of 23, 29 and 35 storeys with about 930 residential suites, and Ottawa council gave the project the green light in 2020. Main and Main is now going ahead with the two smaller towers on the site, which will contain 564 residential units and about 20,000 square feet of retail space.

Rimap has hired the Montreal-based architecture firm of GeigerHuot to design its building, which will feature shared amenities such as a pool, gym and yoga room for residents and hotel guests as well as a restaurant and bar in the hotel lobby at the corner of Slater and Bay streets. 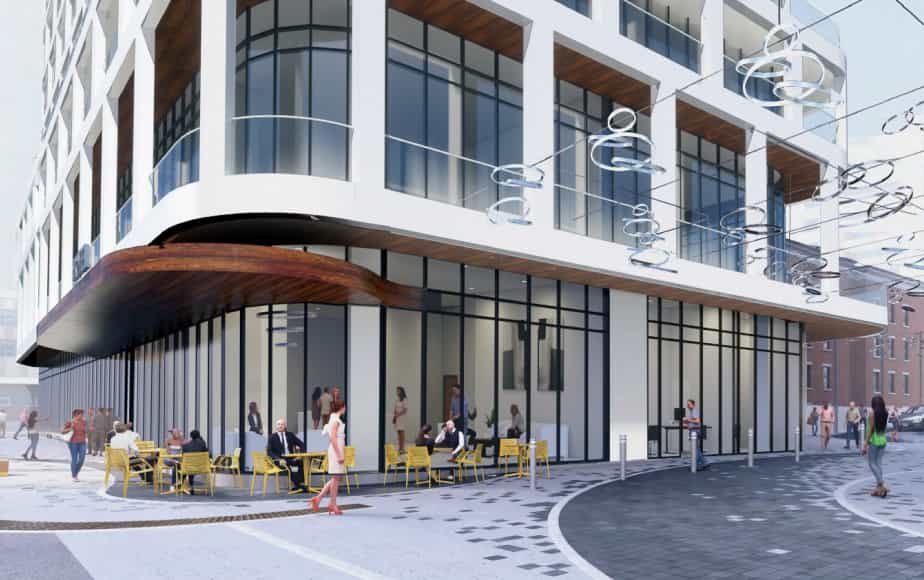 An underground parkade will have spots for 172 vehicles, with 92 reserved for residents and the remaining 80 for hotel guests and employees.

The proposal already meets zoning requirements, and Varadi said the firm hopes to start construction by the end of the year if all goes according to plan.

“We’re looking forward to getting this off the ground,” he said. “The location is very nice.”

Rimap, which is known for developing hotels under the Hilton, Holiday Inn and Marriott banners, has a branding affiliation in place but isn’t ready to reveal it yet, Varadi said. He said the hotel will be a higher-end property catering to government and business clients.

“We’re looking forward to getting this off the ground. It’s going to fit the area perfectly.”

The site has been a prime target for development for years, thanks to its proximity to light rail and downtown office buildings.

Main and Main’s original proposal came more than two years after the previous owner of the property, Ottawa-based Manor Park Management, had submitted its own plan to build three mixed-use highrises at the site.

Manor Park’s project called for 368 rental apartments and 136 extended-stay hotel suites with underground parking for 365 vehicles. It was also slated to include nearly 30,000 square feet of retail and commercial space “to allow flexibility to attract an urban format grocery store,” according to a consultant’s report filed with the city in 2017.

Before that, Broccolini Construction had expressed interest in rebuilding a smaller portion of the property in 2015, proposing a single 27-storey tower to replace the two-storey credit union building.

City council approved that plan, which called for 300 rental apartments and street-level commercial space, late that same year, but the proposal ultimately fell through. Manor Park then came up with its plan after acquiring the site from Alterna early in 2016.

‘The group that got it done’

Varadi praised Main and Main for pushing its proposal through after previous plans stalled.

“This is the group that got it done finally,” he said. “I guess we’re just happy to be a part of it. I think for the most part, people are really happy to finally see movement on it. Instead of just an empty lot, it’ll be a job-generating, tax-generating supply of housing and services.”

Meanwhile, Varadi’s firm is moving ahead with a series of other developments in the capital.

They include a 214-room hotel and a 280-suite apartment tower on a 1.3-acre site in the ByWard Market.

Rimap plans to refurbish the existing five-storey Major Building at 126 York St. ​– a 108-year-old structure that’s protected under provincial heritage legislation and is currently home to several office tenants ​– as a hotel. A proposed 22-storey highrise on adjacent property at 151 George St. would be integrated into the former warehouse via a series of stepped-back floors and a pedestrian walkway.

Varadi said he’s expecting council to approve the project in the next few months and hopes to have shovels in the ground by this summer.

In addition to the proposed York Street hotel, Rimap is also building a 208-room AC Hotels by Marriott lodging at nearby 201 Rideau St. in conjunction with sister company Prince Developments. Varadi said the hotel should be open for business by mid-2023.

Rimap and Prince also teamed up to buy a two-thirds stake in a property at the corner of Rideau Street and King Edward Avenue, with Westdale Properties of Toronto purchasing the remaining share.

The LCBO outlet that currently occupies the site has several years left on a long-term lease. Varadi told OBJ last year it will likely be closer to the end of the decade before any new development plans for the property come to fruition.

Varadi, whose wife grew up in Orl​éans, said he knows the city well and hopes to keep expanding his firm’s footprint in the region.

“I love Ottawa,” he said. “I think there’s lots of potential for growth.”