Giant Tiger chief executive Paul Wood has left after nearly two decades with the Ottawa-based retailer as it battles giants such as Walmart and Amazon in an increasingly complex and competitive retail sector.

“We would like to take this time to thank Mr. Wood for his service and wish him all the best in his future endeavours,” Giant Tiger head of communications Alison Scarlett said in an email to OBJ on Monday morning.

Board member Gino DiGioacchino has been appointed interim CEO, the company said. 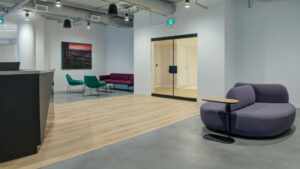 The Carleton University commerce graduate, who joined the company in 2003, held a number of key executive posts before landing the top job, including vice-president of finance, chief financial officer and finally president and chief operating officer.

As COO from 2019 to 2020, Wood oversaw the chain’s acquisition of 36 stores in Western Canada from its franchise partner, the North West Company, as well as the opening of its state-of-the-art distribution centre in Johnstown, south of Ottawa, and the construction of its new head office on Walkley Road.

$2B in annual sales

Under Wood’s watch, Giant Tiger continued to expand even as the pandemic triggered multiple challenges, including supply-chain logjams. The traditional brick-and-mortar retailer had to create an online presence to compete with the likes of Amazon, while also looking to modernize its well-known brand to speak to a new generation of consumer.

The discount retail powerhouse, which opened its first store in the ByWard Market in 1961, now operates more than 260 locations from Alberta to Prince Edward Island and generates annual sales in excess of $2 billion.

Over six decades, Giant Tiger has gained a reputation for living up to its “savings to smile about” tagline, selling a wide assortment of groceries, housewares, apparel, beauty, outdoor gear, kids’ toys and games and other items under its familiar bright-yellow banner – often in neighbourhoods that aren’t served by other discount chains.

Catering to budget-minded customers, the company has become famous for offering a wider selection of goods than dollar stores in smaller, more intimate layouts than the big-box chains. Giant Tigers runs its own trucking fleet to cut down on third-party delivery costs and keeps inventory to a minimum in an effort to save on warehousing expenses.

With more and more shoppers looking to stretch their grocery dollars as inflation has soared to levels not seen since the early 1980s, the retailer recently started beefing up its fresh grocery offerings to entice more consumers into its stores.

“Longevity comes from staying abreast of what the customer needs and providing them something in an environment they enjoy coming back to.”

DiGioacchino, who replaces Wood on an interim basis, is a longtime executive who has held senior merchandising roles at Home Depot and Walmart, among other companies.

Giant Tiger did not say when it plans to name a permanent CEO, but Scarlett said the chain will stay true to its mission while continuing to grow.

“Giant Tiger’s focus remains on providing Canadians with the products and groceries they need at the lowest price possible every day,” she said. “We are proud to serve the 264 communities we call home and look forward to expanding further in the future.”