It was all about the blood, sweat and beers on Thursday night at the Heart & Crown pub in the ByWard Market, where organizers, competitors and alumni of Fight for the Cure came together to promote this year’s white-collar charity boxing gala for cancer.

The official launch party, emceed by 2018 FFTC competitor Matt Jacques, was an opportunity to meet the 10 men and two women who will be stepping into the ring to fight when the event returns to the Hilton Lac-Leamy on Saturday, Oct. 19th, with the Heart & Crown returning as presenting sponsor.

The daring dozen is also working hard to raise money for the Ottawa Regional Cancer Foundation by appealing for online donations.

The personalized approach favoured by the TOH Foundation has already yielded significant interest from across the community, with the campaign almost halfway to its $500-million goal.

Championing the event is Scott Whitteker, who spends eight months training the white-collar boxers at the Final Round Boxing Gym. The novice fighters raved about him at the launch party, describing Whitteker as an “excellent and dedicated” coach.

Boxers must wait until the big night before they can go face-to-face with their respective opponent for the first time. Each match-up will duke it out for three rounds, with each round lasting two minutes.

Organizers say they’re not punching above their weight by setting this year’s fundraising goal at $400,000. The event has been successfully gaining momentum. It certainly got a boost of exposure after a certain future prime minister clobbered his competition in the FFTC ring, in 2012. 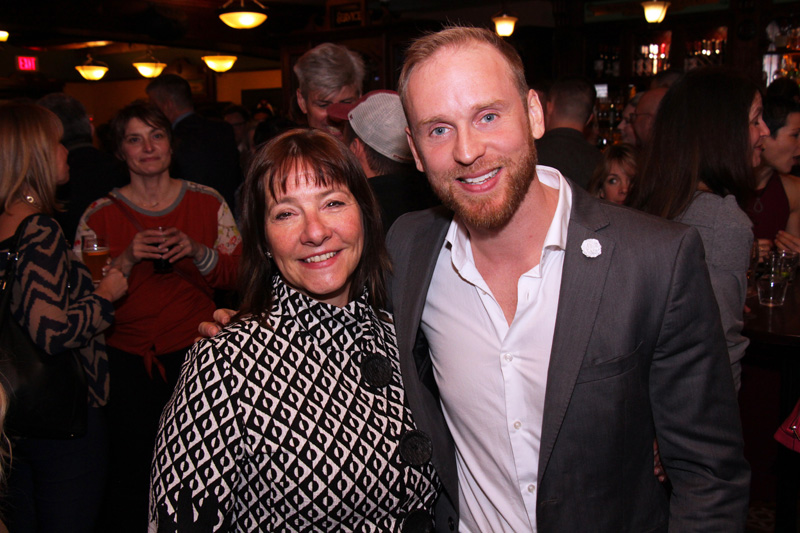 The white-collar boxers were introduced to the room via professionally prepared videos that included footage from the fighters’ rigorous training sessions. The match-ups also took to the stage together to strike the customary dukes-up pose for the cameras.

One of the white-collar boxers, Inflector Environmental Services president and chief executive Jeff Clarke, hopes to haul in $100,000 for the cause. He’s already halfway there.

“There are a lot of good people in our company who are behind me and we are leveraging all our contacts,” said Clarke, 28, who lost his father to cancer five years ago. Jeffrey Clarke Sr. was the founder and CEO of Inflector before passing away at age 58.

Clarke, 28, who’s also on the board of The Ottawa Hospital Foundation, said he believes in raising funds to support the work being done by scientists to find an eventual cure for the disease.

He will be fighting Keynote Group vice president of marketing Kyle Turk, who lost a couple of buddies to cancer from his hometown of Peterborough, when they were still in their 20s.  “To take a few punches and get beat up for one night is nothing compared to what they went through,” Turk told OBJ.social.

Turk found the courage to participate after watching his former boss, Welch LLP managing partner Micheal Burch, train for months for his big fight, in 2017. “It was pretty inspiring.”

Sometimes, all it takes is the experience of being a spectator at FFTC to convince oneself to climb into the other side of the ring. That was the case with Colin Noble, a banking professional with BDC.

“Last year, I  was there to support three people who were fighting and I had an absolute blast,” Noble told OBJ.social. “I would say it’s probably one of the best events of the year.

“When I was asked to get involved, I was really excited and decided I wanted to take part in it.”

Coincidentally, Noble had been sitting at FFTC with lawyer Afton Maisonneuve, from returning sponsor Kelly Santini. She, too, signed up for the charity boxing bout fight after watching her colleague Lisa Langevin and her competitor, Daphne Ballard, become the first female boxers ever to participate in FFTC. Maisonneuve’s opponent is a super fit-looking RCMP constable, Megan Apostoleris.

The training “has been very challenging but so much fun,” said Maisonneuve, who comes from a competitive rugby background and serves as a reservist in the infantry. “Every training session is a big old slice of humble pie.”

Noble is fighting Kyle Dowd, who was persuaded to participate by Matt Jacques following their discussions at a Mayor’s Breakfast event. Dowd is a bank branch manager with BMO in Stittsville as well as administrative chair of Special Olympics Ontario — Greater Ottawa.

Dowd lost his father-in-law, Herbert Betts, to cancer last August and has a friend who’s expecting to lose his wife to the disease. He said his drive comes from the cause, and not the competitive nature of the sport. “The awareness that we’re raising, as a group of business people in Ottawa, is unsurpassed,” said Dowd. “When it comes to fight night, somebody is going to win and somebody is going to lose. Who that is doesn’t matter because, at the end of the day, we’ve done the right thing.”

Back when Marc Morin was a kid, he was so inspired by the popular Rocky films that he dreamed of one day becoming a professional boxer. “I’ve always loved boxing but was too chicken to try it,” acknowledged Morin, co-founder of Koble Commercial Real Estate & Brokerage.

These days, he’s been having the time of his life at his training sessions on Monday and Wednesday nights. He loves the fact that he’s whipping himself into better shape as he prepares to fight Rob Hewitt, an advisor with Cresa.

“It’s a personal challenge that goes beyond what I would ever put myself through if I didn’t have a cause and a reason to do it,” said Morin, who not only lost his father to cancer two years ago but also has friends who have died from the disease or are currently diagnosed with it.

Lawyer Brad Yaeger, an associate at Borden Ladner Gervais (BLG), said he’s “living the dream” by participating in FFTC while also supporting a cause that has touched his friends and family. “This is a bucket list-event for me,” he told OBJ.social. “I’ve always wanted to do this and now, to be able to do so and to raise money for such a good cause — it’s like the stars have all aligned.”

Yaeger is fighting Pierre Bégin, from Valley Flowers. His father, Jean Bégin, who’d been the head of the family business, died in 2015 from cancer.

Assent Compliance vice president of corporate development Marc Harrison, 57, volunteered to participate after losing his mother to cancer a couple of years ago. The experience has been “incredible”, both due to the physical training and to the sense of camaraderie amongst the white-collar boxers, he said.

“None of us ever knew each other before,” he explained. “This is turning into such a journey for all of us.”

Due to popularity of Fight for the Cure, tables for the 2019 event have sold out. However, company names can be added to a ticket waiting list, and the event is recruiting corporate sponsors at various levels. To find out more, visit fightforthecure.ca.