Downtown Ottawa retailers waiting for the workers to return

The city’s central business district remains virtually empty more than a year into the pandemic, leaving a legion of forgotten retailers searching for answers

This article originally appeared in the spring edition of OBJ’s newsmagazine. Read the full issue here.

Slightly more than one year ago, the office workers in the Sun Life Financial Centre on O’Connor Street went home.

Each weekday, Mahmod Saed sits in a barber chair on the ground floor of that building and waits for them to return.

He sits in the chair of The Elegant Man Barber Shop and shakes his head. He has been cutting hair in the Sun Life Centre for 11 years. A job that has helped him raise four children.

He bought the shop from a barber who also owned it for 11 years. Cutting hair, a block-and-a-half from Parliament Hill – that used to be a steady job.

“I qualified for (COVID) government assistance,” says Saed. “That’s the only reason I’m here talking to you. But that can’t go on forever. I don’t want it to go on forever. I want to go back to work.”

Merchants in downtown Ottawa are the forgotten retailers of the pandemic, the ones left behind when every office worker in the city went home, popped open a laptop and started living full-time in the suburbs.

Or the country. Or the Glebe. Anyplace but downtown.

When Saed is asked what the past year has been like for him, he laughs and tells me to look around. It is a small barbershop, without frontage on O’Connor Street, and must rely greatly on foot traffic through the Sun Life Centre. No way the pandemic has been kind to Mahmod Saed. 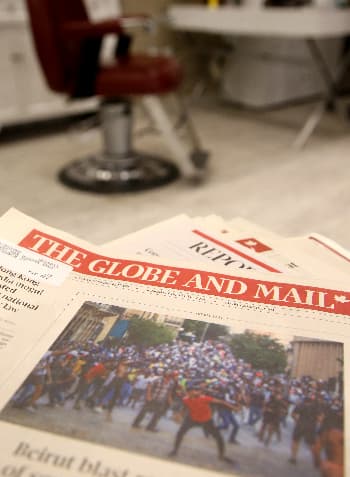 I glance at the posters of highly-coiffed models, a sparse shelf of beauty supplies for sale, and finally I see it.

Saed laughs when he sees the surprise on my face.

“It was the same day as the explosion at the Beirut Harbour,” he says. “It seemed a good day to cancel things. I don’t need the subscription right now.”

There is a stack of magazines and newspapers on a side-table, left there for customers to read while waiting. On top of the stack is a Globe and Mail Report on Business.

If you haven’t been there recently, it’s still empty.

“It’s two different worlds, downtown and the suburbs,” says Kevin McHale, executive director of the Sparks Street Business Improvement Area. “I drive in from the west end, and some areas where I live, you’d barely think there was a pandemic going on. Things look almost normal.”

In downtown Ottawa, nothing looks normal. Here, it still seems like the early days of the pandemic.

There are few people walking downtown streets. Every office tower seems cavernous and empty. Traffic is so light you can picnic at intersections that once tried to kill you (O’Connor and Sparks, Metcalfe and Queen). 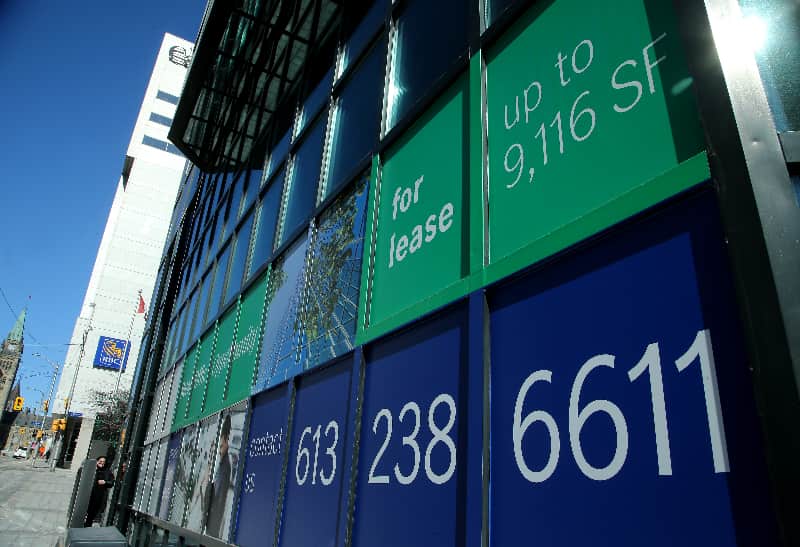 And everywhere there are shuttered businesses with paper in the windows. The travel agency that specialized in cruise-ship vacations didn’t make it. Ditto for the floral arrangement and gift basket store that once must have made a killing on office parties and going-away lunches.

Even a Starbucks in downtown Ottawa is papered over. Something I’ve never seen before.

“The recovery can’t start downtown until the office workers come back.”

“The recovery can’t start downtown until the office workers come back,” says McHale. “We’ve asked the feds what their plans are, and we haven’t been told much. We need to see some sort of plan, something that lets us know how many workers are coming back, so we can plan for the future. Right now, everyone is just waiting to hear.”

Nor does the federal government seem overly concerned about empty storefronts and buildings. The feds, after all, own the north side of Sparks Street and have had empty retail space there for years.

Indeed, the feds are so accustomed to owning empty retail space they designed special paper to cover over the windows. The paper is printed to look like stained-glass windows in the Senate. 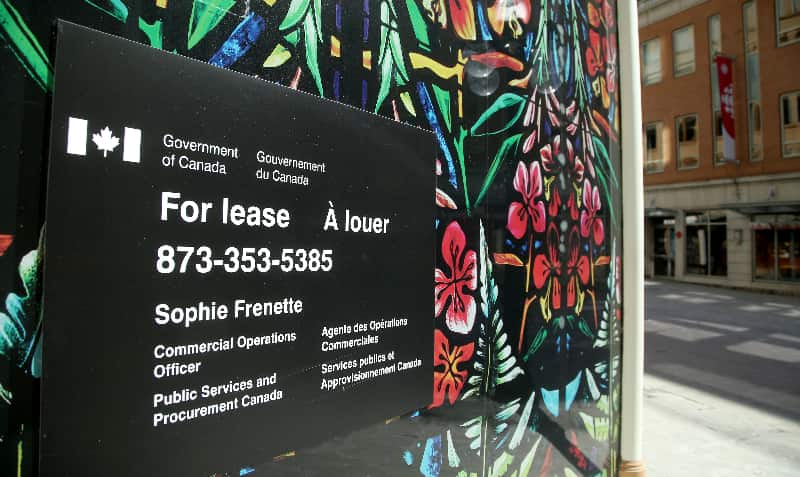 “We estimate the downtown office towers have about 25 per cent of their workers right now,” says Dean Karakasis, executive director of Building Owners and Managers Association of Ottawa (BOMA Ottawa). “At the height of the pandemic it was five per cent.”

To add to the confusion there’s Shopify, the local business behemoth that announced shortly into the pandemic that most of its workforce would start working permanently from home. At the same time it announced it was subletting its corporate office on Elgin Street.

“That’s another thing we’re waiting on,” says McHale. “Will other companies follow Shopify’s lead? Will it even happen? … Maybe Shopify will change its mind.”

McHale admits that could be wishful thinking. Shopify has given no indication it’s re-thinking that decision. And at the end of the day, he says, what downtown merchants need are more residents, not more office workers.

“We need to diversify the base. We can’t just rely on office workers and tourists. We need more people living downtown.”

That’s the long-term strategy. Right now, office workers remain indispensable to the economic health of downtown Ottawa. Both McHale and Karakasis think they’ll be back by the fourth quarter of 2021.

“I just don’t believe everyone can be successful working from the bedroom of their condo,” says McHale.

I ask Mahmod Saed how many customers he’s had this day and he tells me none.

“I don’t know why I bother coming in on Fridays,” he says, looking around his shop. “It’s the worst day of the week. There is no one in this building but me and the security guards.”

The day before he had four customers. That’s a good day in 2021.

People were cutting through the Sun Life Centre on their way to a job interview, or an important meeting, and they’d come to see him. “A little off the back,” they’d say. Something like that. 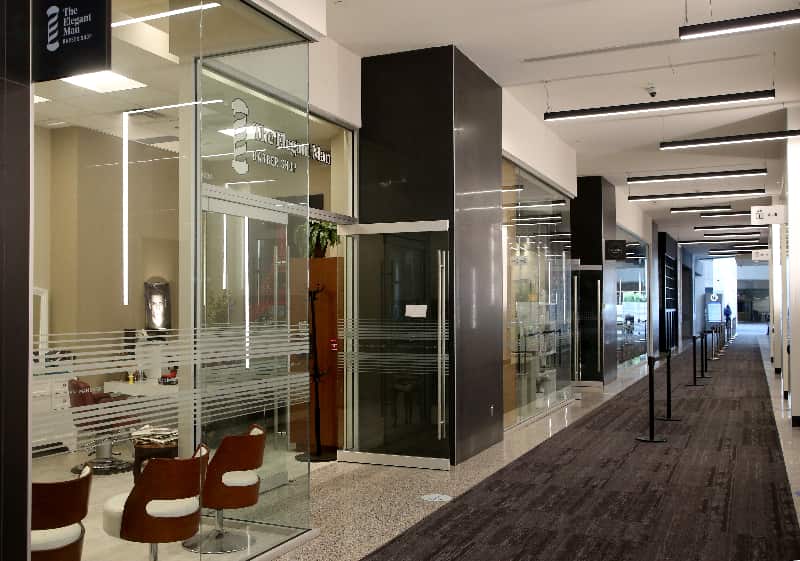 On his feet all day long. And the LRT just opened. With a stop directly connected to the office complex. His landlord said there would be another 25,000 people cutting through the Sun Life Centre each day because of that stop.

Saed did the math. He would need another barber. He hired someone March 7.

The next week he shut down his barbershop, phoned the man he’d hired and wished him luck.

“Those were the plans I had last year,” he says. “Now, I have no plans. I wait to find out what will happen to my shop. It’s out of my hands.”

He can do no more than what he is doing. Show up each day. Be prepared to work.

And wait for the office workers to return to downtown Ottawa.

Ron Corbett is co-founder of Ottawa Press and Publishing, a regional book publisher. A former columnist with the Ottawa Citizen and Ottawa Sun, Corbett was also the third editor of Ottawa Business Journal.