After announcing earlier this year it plans to open its first Ottawa location on Slater Street, international co-working giant Spaces says it has two more facilities in the works at the Zibi mixed-use waterfront development.

Spaces, a division of Switzerland-based International Workplace Group, said Thursday it’s taking a total of 55,000 square feet of real estate on both sides of the Ottawa River and expects to open the new facilities next year.

Wayne Berger, CEO of IWG’s operations in Canada and Latin America, called Zibi a “once-in-a-lifetime” project. Ottawa’s Theia Partners and Toronto-based Dream Unlimited are developing the 34-acre mixed-use neighbourhood, which is eventually expected to house 5,000 people and contain eight acres of riverfront parkland along with more than a million square feet of environmentally sustainable commercial and retail space.

“It has everything that a monumental new development should have: bold vision, historical roots, unbelievable location, cutting-edge sustainability and the potential to redefine an entire region,” Berger said in a statement.

Spaces Zibi Gatineau will have a footprint of 29,000 square feet and will be located in the former industrial buildings just east of Eddy Street.

The company says the facility will feature “beautifully rehabilitated and repurposed retail and office spaces,” including design elements “that honour the site’s historic and fascinating past.” Spaces says the opening is slated for the second quarter of 2020. 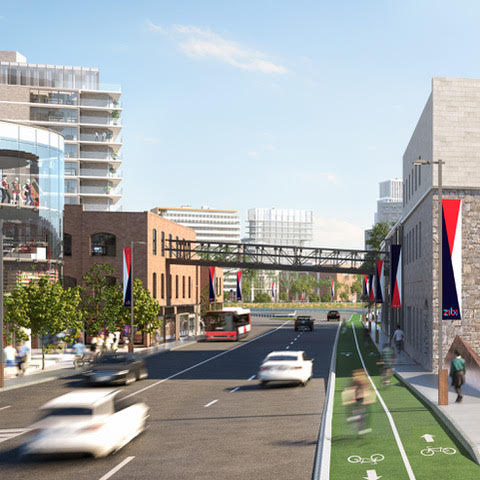 Just a few hundred metres to the south, Spaces Zibi Ottawa will occupy 26,000 square feet in a four-storey former paper mill on the west side of Booth Street on Chaudière Island.

The company says the existing south and east walls and their structural bays will be preserved “to maintain the building’s industrial appeal.” The offices will open on to Head Street Square, a new public space designed to pay tribute to the site’s industrial past, and is expected to open late next year.

IWG is no stranger to doing business in Ottawa.

The company already operates three co-working spaces in Ottawa under its Regus brand, and it’s set to expand its footprint early in the new year when it opens 75,000 square feet of co-working facilities on the first six floors of 66 Slater St. under the Spaces banner.

Noting Ottawa’s abundance of tech workers ​– nearly 10 per cent of all jobs in the city are tech-related, the second-highest ratio in North America after San Francisco ​– and an office vacancy rate that’s dropped below seven per cent in the downtown core, IWG says it expects its Zibi properties will be in “high demand.”

IWG isn’t the only company that’s cashing in on rising demand for shared-work spaces in the National Capital Region.

Fuelled by the growing prevalence of startups in fields such as tech, the push toward a “gig” economy focused on short-term contracts and freelance jobs and the rise in the number of self-employed workers, co-working spaces are booming across North America, and Ottawa is no exception.

Although precise figures are hard to pin down, estimates of the amount of local office space now dedicated to short-term tenants range from about 115,000 square feet ​– commercial property brokerage Cresa’s estimate earlier this summer, which doesn’t factor in the Spaces deals or Toronto-based iQ Office Suites’ upcoming 13,000-square-foot facility at 222 Queen St. ​– to CBRE’s tally of more than 300,000 square feet that includes several upcoming projects.

Berger, who grew up in Ottawa, told OBJ earlier this year that the demand for such facilities is being driven by a new generation of workers who can set up shop anywhere as long as they have a laptop or mobile device.

“Companies are really looking to say that if they want to attract the top talent and retain the top talent, they need to be able to offer a flexible working strategy,” he said.