Blachford Law Charity Game: it was a nail-biter

Blachford Tax Law can boast that it’s batting 1.000 when it comes to its charity softball game.

The event, now in its third year, is hosted by Ottawa tax lawyer Dean Blachford as a way of bringing chartered professional accountants together for a fun and sporty afternoon. For many, it’s a refreshing change from, say, golf. It also raises money and awareness for different local charities each year. 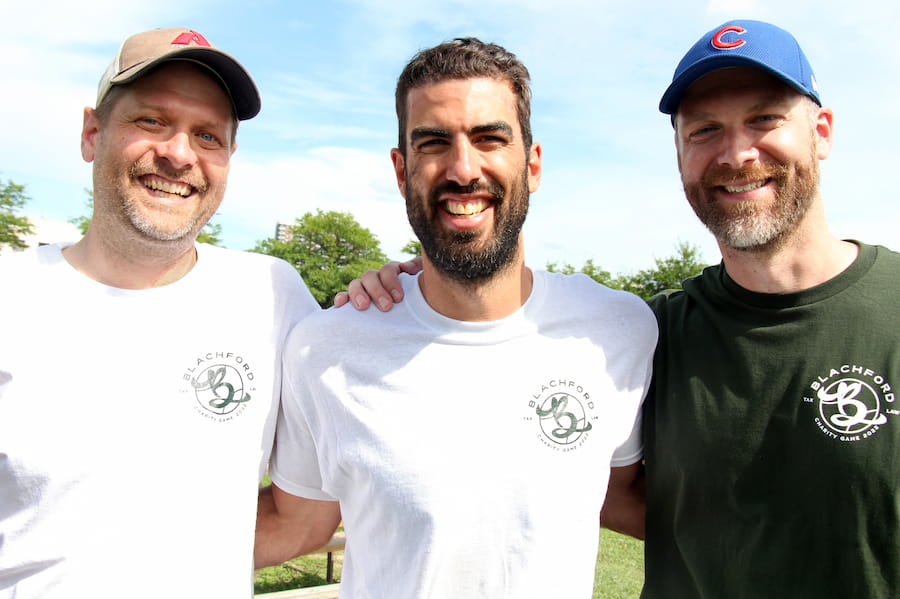 It was the perfect summer day to play ball, really. Afterward, everyone headed to nearby Hometown Sports Grill for food and drinks, courtesy of the sponsors: Accountancy Insurance, DC Foresight Financial, TAG HR and Convergence Networks.

“This might turn into a league, it’s so popular,” joked Wilson of a game that seems to be growing in interest and support. “I’m thankful to Dean for all the work that he does to organize this, because it is a lot of work.”

New this year was a DJ, set up right behind the backstop. The event also saw accountant Sarwar Qureshi from Paterson & Company announce the players as they stepped up to bat. All that was missing was personalized walk-up music to the plate, mused Andrew DuBroy of Hendry Warren LLP.

When it comes to the Blachford Tax Law Charity Game, word is definitely catching on, said Blachford, who said he’s now having to turn people away. “People understand the concept, they know what to expect, they know it’s going to be a good time.”

Surprising to see was Vicky Shah from Accountancy Insurance playing in the outfield without a glove. It’s just how the former Australian cricket player rolls. Shah, who’s from Toronto, was seen scooping up a grounder with ease and quickly throwing it back to the infield.

HazloLaw founder and CEO Hugues Boisvert, who helped to launch the event in its inaugural year, remains a big fan of the charity game. The slugger hit two home runs on Thursday. So did Sam Tremblay (Deloitte). Meanwhile, Matt Westphallen (Crowe BGK) and David Walter (DC Foresight Financial) also made it around all four bases with their powerhouse hits. Joey Belanger (Baker Tilly) got a grand slam.

“The focus is on having fun,” said Boisvert, whose nearly nine-month-old daughter Matisse dropped in with mom Tegan Boisvert. 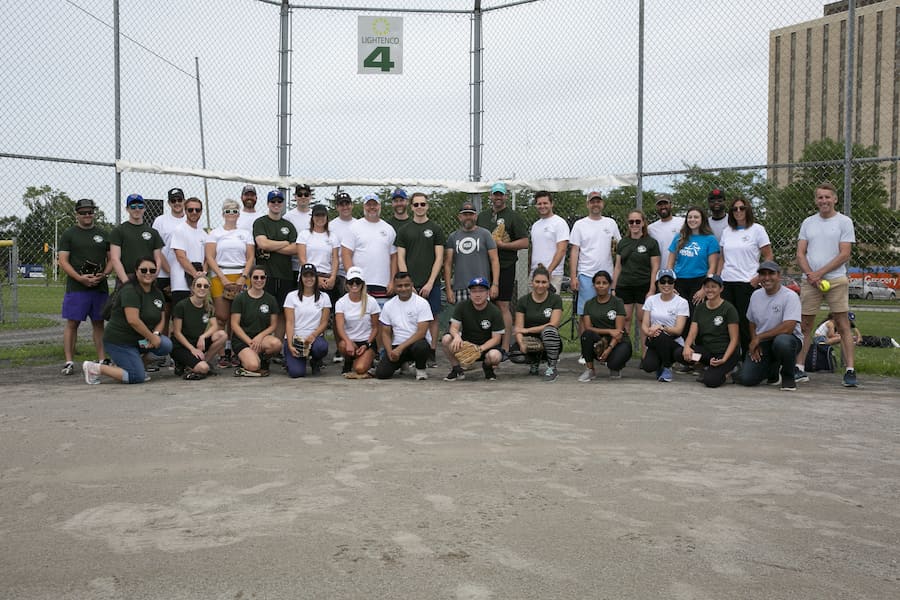 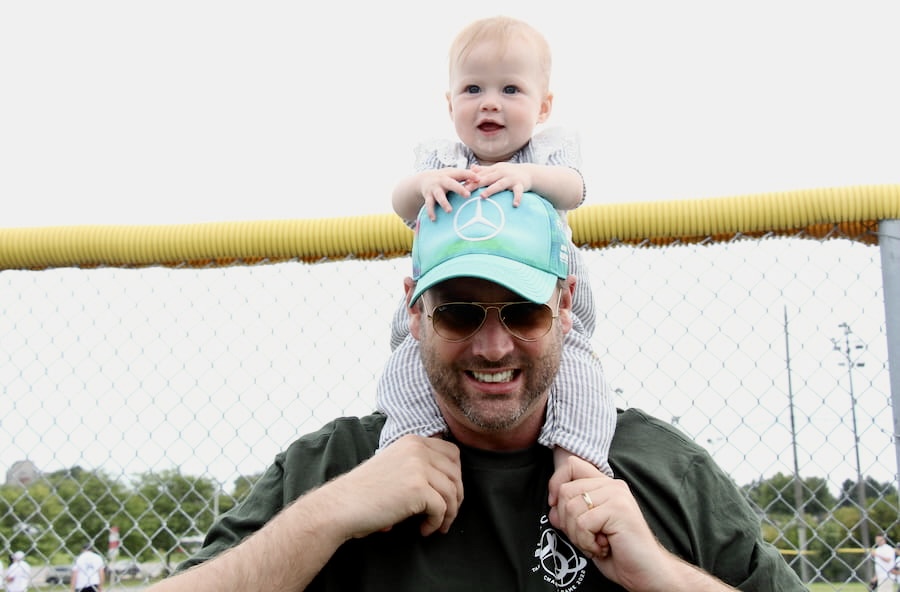 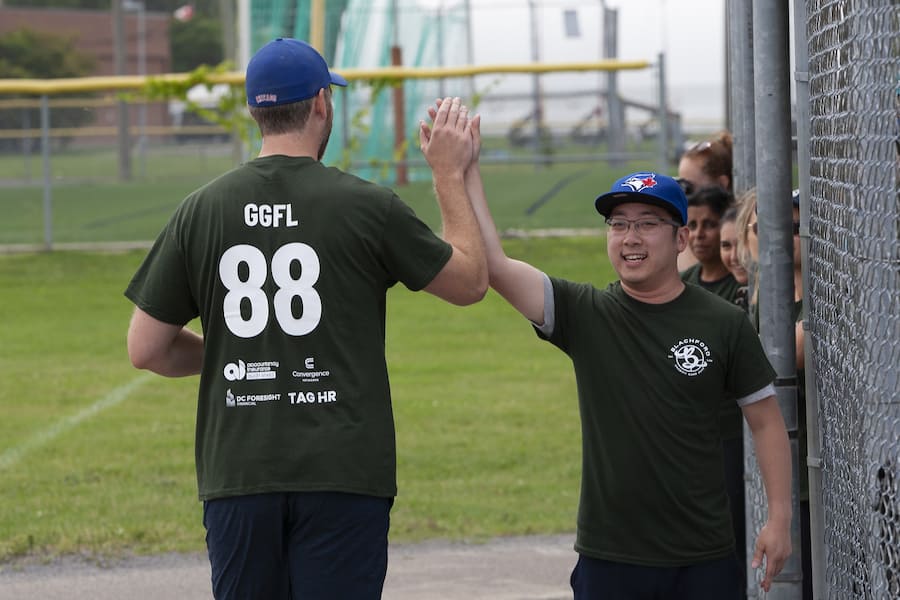 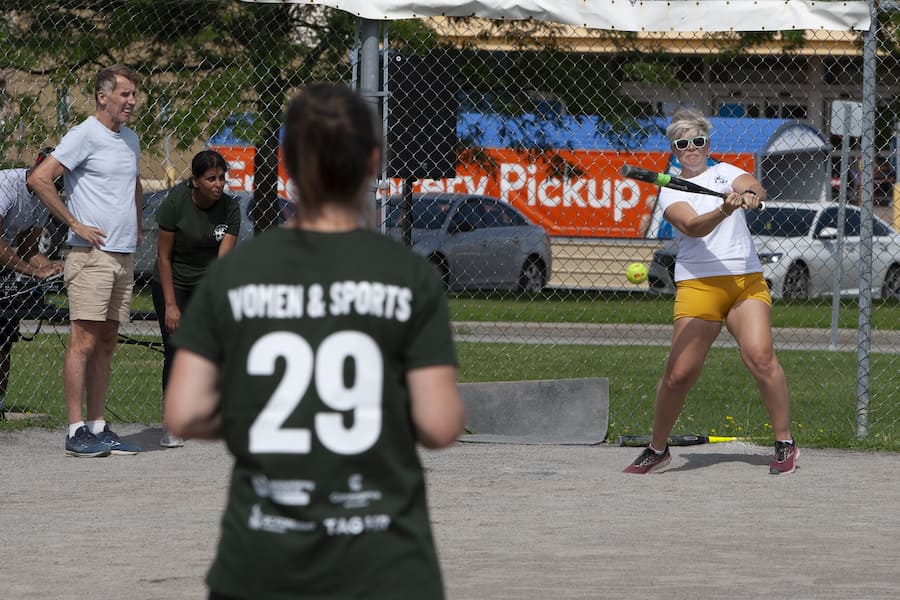 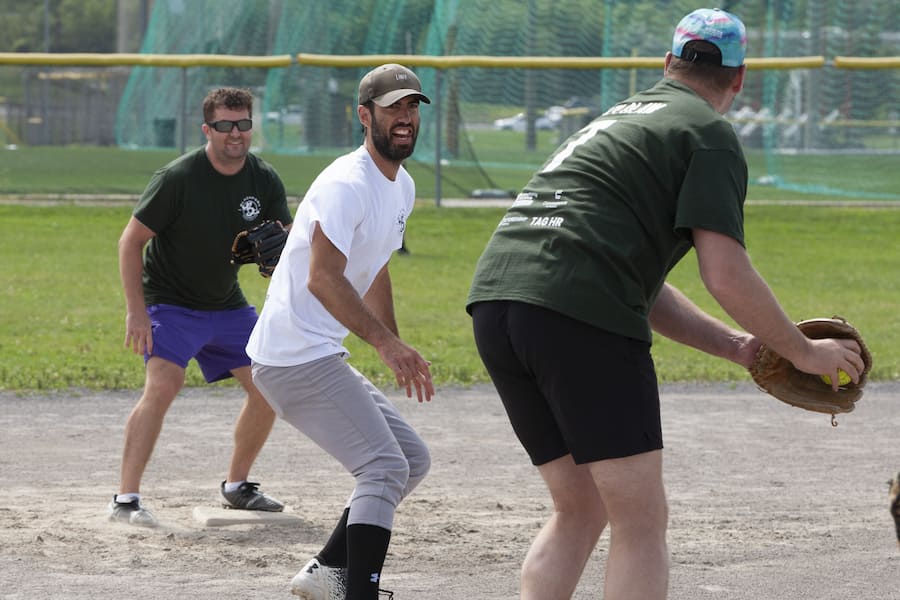 As laid back and relaxed as the vibe is, the charity game is also highly organized.

Take the team selection, for example. There’s nothing random about it. It’s all done in advance by Blachford, who sends out questionnaires that require players to self-assess their softball skill level. “I agonize about it,” he said of the sorting process.

The final score of 18-17 for the White Team was a strong indicator that the teams were evenly matched this year. The final inning was a real nail-biter, with the White Team coming from behind to win after both Blachford and teammate Westphalen successfully stepped up to the plate.

Even the umpire, Robin Kerr, compared the final minutes to the script for a Hollywood movie.

Later, Blachford gave a special shout-out to the women players.

“I’m always grateful to the women who come out and play because it’s sometimes intimidating, but we really want this event to feel inclusive,” said Blachford, who can always count on his wife, Stephanie Talsma, to participate. She’s director of programs at Canadian Women & Sport.

Coincidentally, the White Team played for a cause that’s about keeping girls active. It was supporting the OSEG Foundation and its Girls on the Run Ottawa program.

“Running is the hook but, really, it’s the critical life skills that they learn,” said OSEG Foundation executive director Janice Barresi. “The sad reality is, girls tend to drop out at far higher rates than their male counterparts. We wanted to provide girls in our community, particularly those with barriers, the same equal chance that boys have to participate, learn and grow, and reach their full potential through sport.”

Barresi shared an impactful story about a young Muslim girl who lives in the underserved community of Bayshore. The girl was dealing with low self-esteem when she got involved in the 10-week Girls on the Run program, she said.

“She talked about it through the program, that she didn’t see girls like her on TV, in magazines or participating in sport,” said Barresi, while pointing out that the girl didn’t wear her traditional head covering, presumably because she was too self-conscious.

“On the final day of the program, she wore her hijab because she felt confident in who she was, and her self-esteem was bolstered through the program.”

The Green Team was playing for the Dementia Society of Ottawa and Renfrew County, a non-profit organization that provides one-on-one coaching, education and social programs at no cost to clients. There are 24,000 people living with a diagnosis of dementia in the region, and those numbers are expected to double in the next 10 years, said fund development manager Ashlee Pallotta.

The White Team, because it won, got to donate $5,500 to OSEG Foundation’s Girls on the Run program through support from the sponsors. In the end, the money donated by the Green Team to the Dementia Society was bumped up to the same amount after Video Tax News, Roussy Tax Services, Kody Wilson and Paterson and Company each pitched in extra.

In another display of good sportsmanship, Barresi extended the OSEG Foundation’s gift of two free Redblacks tickets to the players on both teams. 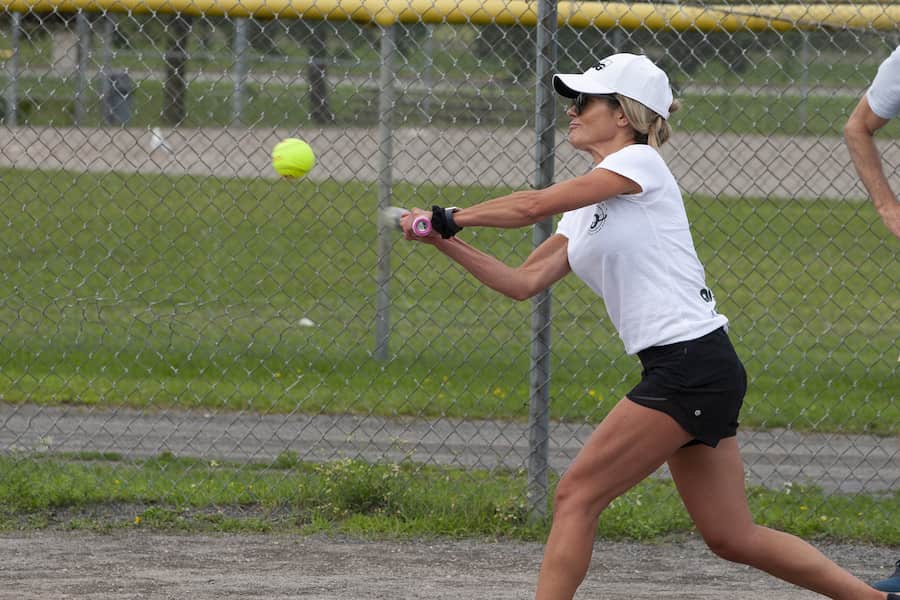 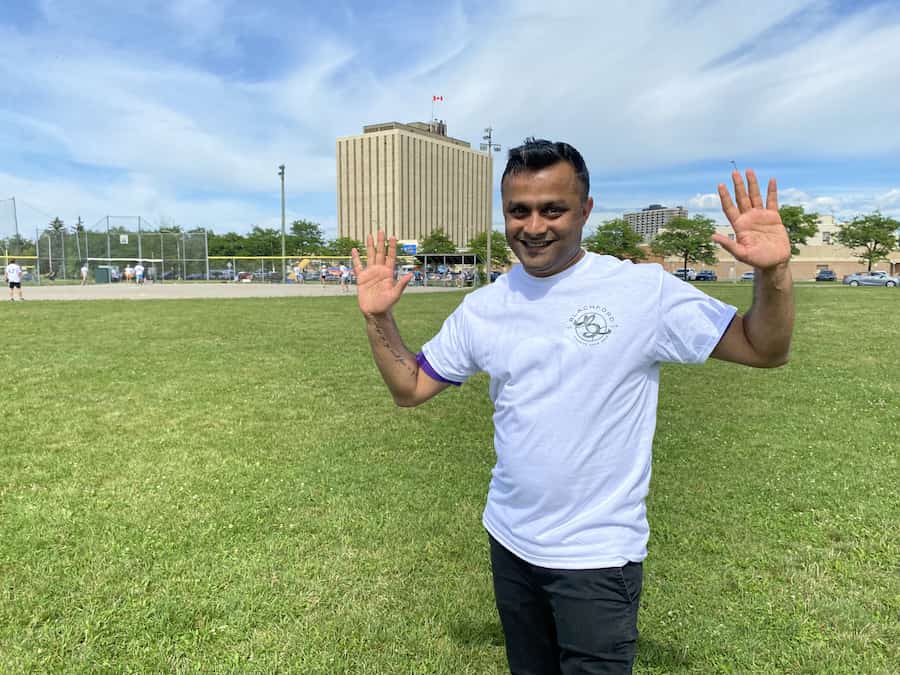 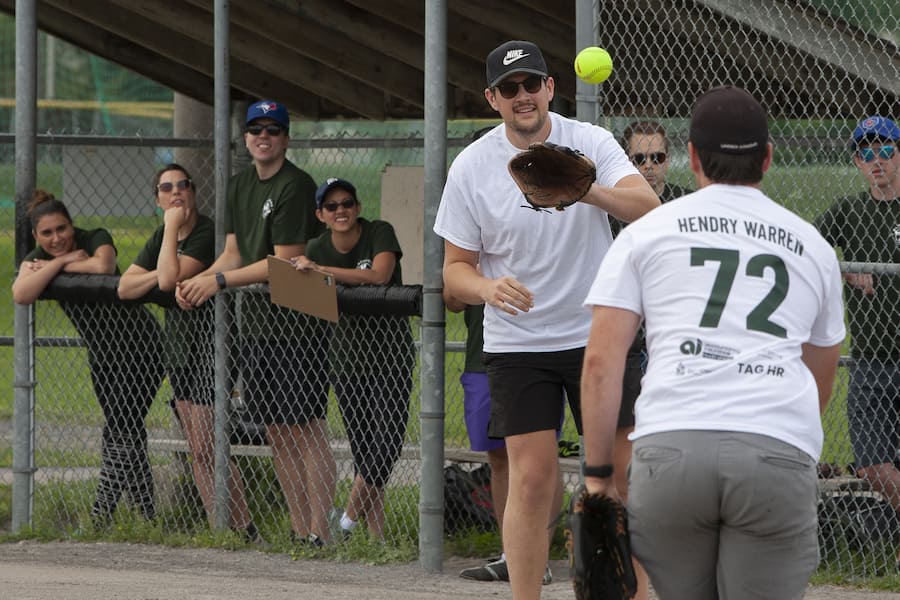 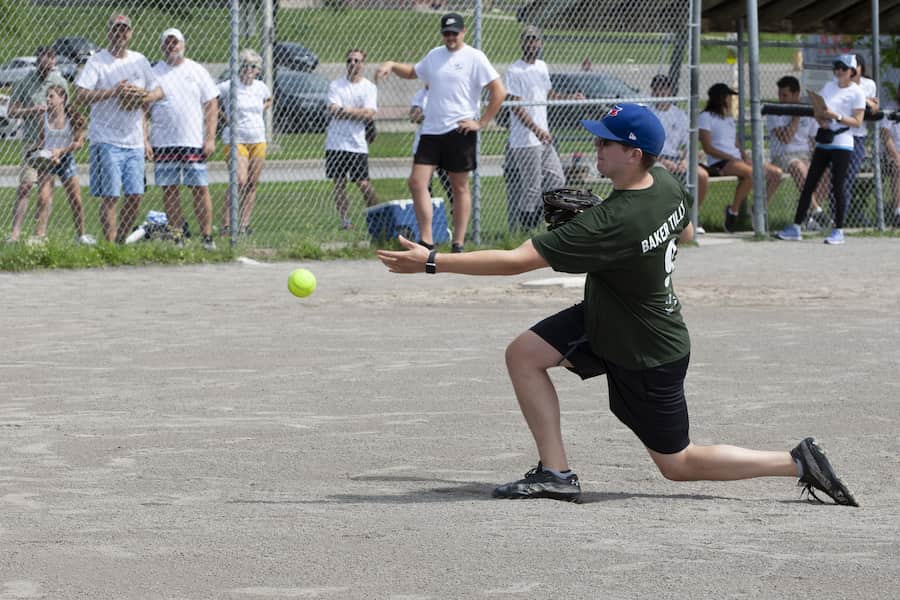 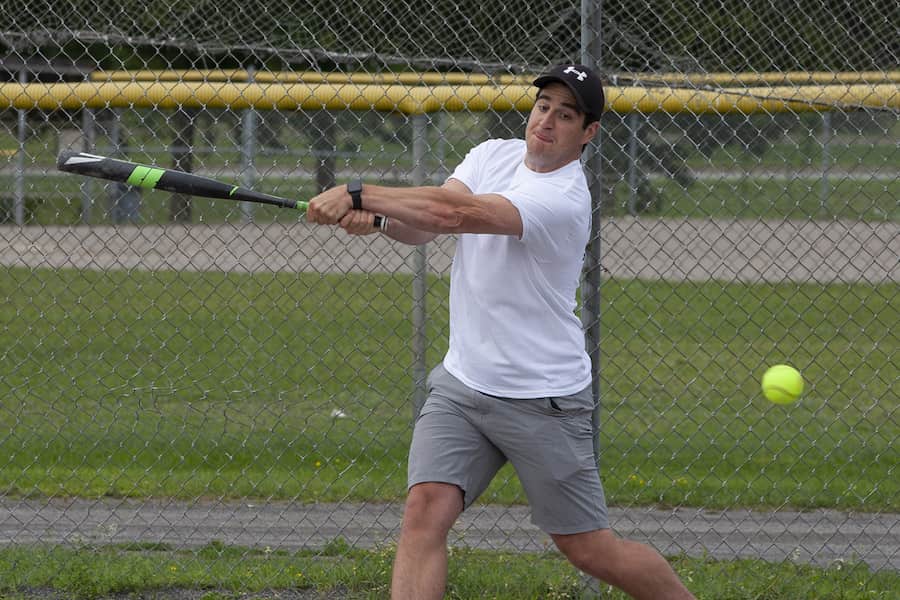