When local tourism luminaries and politicians gather at the Zibi neighbourhood just west of downtown Gatineau on Tuesday afternoon for the official launch of what’s being billed as the world’s “first interprovincial zipline,” it’s doubtful anyone will have a bigger smile than Jeff Westeinde.

The veteran Ottawa real estate developer is a principal in Theia Partners, which is spearheading the multibillion-dollar Zibi project along with Toronto’s Dream Unlimited.

After years of watching his vision for the 34-acre mixed-use neighbourhood unfold in slow, methodical fashion, Westeinde sees the next few months as a watershed time for the development that straddles both sides of the Ottawa River.

Two winners of an online charity auction, will have the honour of taking the inaugural zip across the river at 1:45 p.m. on Tuesday. For Westeinde and his partners, that trip will also serve as the unofficial kickoff for what’s expected to be an eventful next few months at Zibi.

While the zipline is expected to draw a hefty contingent of visitors to the site this summer, it’s the people who are committed to being there year-round that really have Westeinde and his partners excited.

By the end of 2021, six of the neighbourhood’s 44 proposed buildings will be occupied by residents and office workers. About 21,000 square feet of finished office space is now available for lease ​– including 14,000 square feet on the top floor of a eight-storey, 158,000-square-foot class-A building next to Chaudière Falls that features the federal government as the anchor tenant. 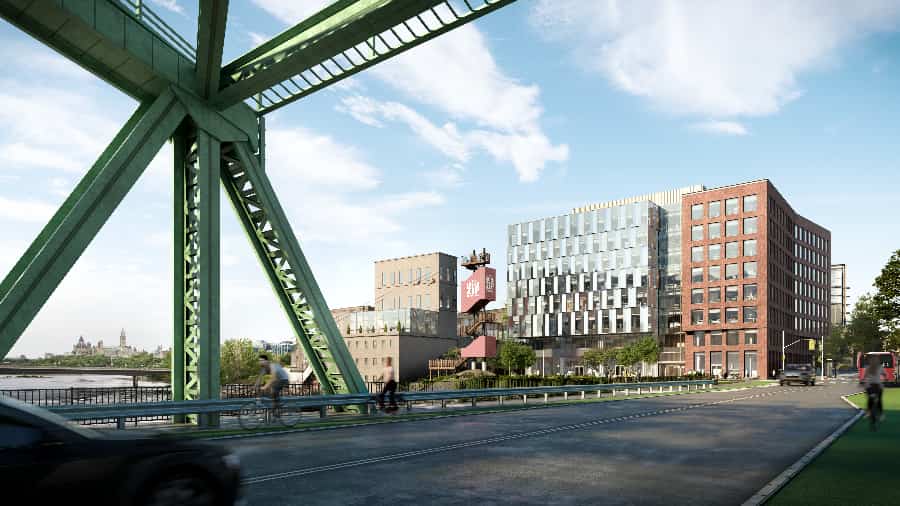 The new building is designed to be carbon-neutral, thanks to a system that uses energy captured from effluents at the nearby Kruger paper plant in Gatineau for heating and water from the Ottawa River for cooling.

Over the next five years, the developers are planning to construct three more buildings totalling more than 200,000 square feet of retail and office space that will employ the same green-energy technology.

Westeinde said a growing number of companies, especially in the tech and knowledge-based sectors, are keen to plant their flag at Zibi due in large part to the builders’ commitment to sustainable energy principles.

“We’re zero-carbon out of the gate,” he said. “It’s so easy for companies to come in and automatically hit a lot of their (environmental, social and governance) goals just by being on our site.”

Avison Young principal Lindsay Hockey, who is overseeing the office and retail leasing process at Zibi, says there’s been a flood of interest from potential tenants.

“It’s been refreshing, actually,” he said in a recent interview. “We’re not just focused on tenants who’ve resided in office buildings in Ottawa. We’re looking all over the place for companies that want to be a part of something (sustainable) and are willing to move and set up in Ottawa.”

Other companies are already on board, including co-working giant Spaces, which has about 65,000 square feet of space ready for occupancy at Zibi in two locations on either side of the river.

Meanwhile, the site’s first two condo buildings, totalling about 170 units, are now occupied, and a 17-storey highrise with about 160 rental units at the foot of the Chaudière Bridge will start leasing this fall.

In addition, construction is slated to begin this summer on two other major developments – a 22-storey, 250-unit tower on the Ottawa side that’s being developed in conjunction with New York-based communal living provider Common and a 10-storey highrise in Gatineau with about 130 rental units. Both buildings are expected to be ready for occupancy by 2023.

The developers anticipate that between 400,000 and 600,000 square feet of new office, retail and residential space will be added to Zibi each year through 2027. When complete, the site is expected to house 5,000 residents and employ 6,000 people in more than a million square feet of space.

Westeinde said it’s all part of a plan that’s coming together nicely.

“It is absolutely great for us to finally be able to point to the things we’ve been talking about for all these years.”