Having to choose is always hard but The Royal Ottawa Foundation for Mental Health managed to narrow its long list of dedicated volunteers down to 40 names in honour of the foundation’s past 40 years.

They were all invited to a gathering emceed by Michael O’Byrne from CTV Ottawa and held Wednesday at The Royal Ottawa Mental Health Centre on Carling Avenue. There, the crowd learned how each mental health leader has helped to shape the success of The Royal Ottawa Foundation over the past four decades.

Sharon Johnston, wife of former governor general David Johnston, used her platform of Rideau Hall to raise awareness and bring support to the cause of mental health. Daniel Alfredsson, former beloved captain of the Ottawa Senators, was singled out for inspiring countless people to feel comfortable in speaking about mental health, after he began publicly sharing his personal family connection to mental illness in 2008 as part of The Royal’s You Know Who I Am awareness campaign.

Honorary patron Margaret Trudeau couldn’t be there. Nor could Montreal Canadiens assistant coach Luke Richardson and his wife, Stephanie Richardson, who transformed their very private pain into a call-to-action, after losing their 14-year-old daughter Daron to suicide in 2011. The subsequent Do It For Daron (DIFD) initiative started by a group of volunteers to boost awareness for youth mental health has raised more than $3.7 million.

Former Ottawa mayor and MPP Bob Chiarelli was recognized for creating the vision of a Leaders For Mental Health Breakfast. It raised more than $600,000 this year and was emceed by well-known broadcaster and former foundation board member Mark Sutcliffe. He received an award, as did philanthropist Shirley Greenberg, for her humble generosity and kind spirit, and her daughter-in-law Barbara Crook, who’s been such a staunch supporter and passionate advocate of mental health.

Prominent businessman John Ruddy, honorary chair of The Royal’s $25-million campaign for mental health, was among the Top 40. His award was accepted by Mariette MacIsaac, who manages his philanthropy through the Trinity Development Foundation.

Other recognized business leaders included KOTT co-owner Melissa Kruyne, who became a mental health leader in Ottawa after her friend, Jennie James, died by suicide, and Bruce Hillary, who was an integral part of creating The Royal’s charity golf tournament at the Ottawa Hunt & Golf Club. It netted $268,000 this year. Also key to the foundation’s success are: tireless volunteer fundraiser Richard Getz from Colonnade BridgePort, the Malcomson Family from the Canadian Tire in Kanata, and Liza Mrak, co-owner of Mark Motors Group and co-chair of the 2019 Run for Women. It netted a record-breaking $400,000 for women’s mental health. 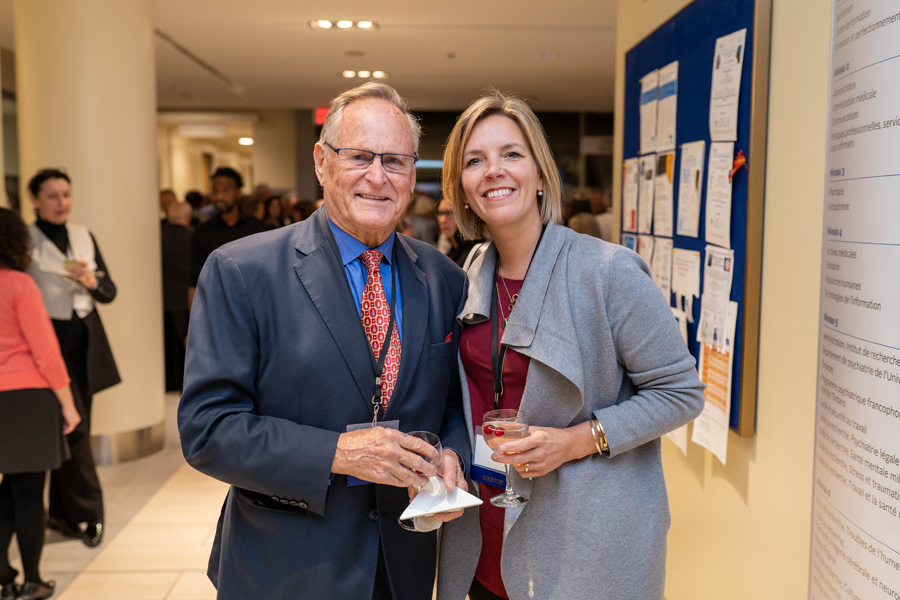 Groups honoured that night included Women for Mental Health, an all-female philanthropic initiative that began in 2011 with 21 founders and raised $1.6 million, and the Ottawa Construction Association, represented by John DeVries and Paul McCarney, president of Clean Water Works (he’ll be honoured again next week at the Ottawa AFP’s Philanthropy Awards Dinner, as 2019 Outstanding Volunteer Fundraiser).

Telecommunications company Bell, which donated $1 million to the The Royal and runs the Bell Let’s Talk awareness campaign, was a recipient. So were Shoppers Drug Mart and Associates in Psychiatry.

“As we reflected on 40 years, we realized we’re truly the sum of the efforts of our best volunteers and donors,” Royal Ottawa Foundation for Mental Health president and CEO Mitchell Bellman said at the podium.

“Tonight, we thank you. We’re able to deliver world-class care and research because you believed in the importance of building a foundation that would serve vulnerable populations for generations to come.”

Gordon Cudney, who has battled depression, on and off, for the past 16 years, is the board chair for The Royal Ottawa Foundation. He’s also a partner in the Ottawa office of national and international law firm Gowling WLG.

Cudney spoke compellingly, from the heart and without notes, about how far the mental health movement has come, using his own situation as an example.

He shared with his audience some personal information: he’s been really suffering this past year. “Unfortunately, 2019 has been a rough year for me,” said Cudney.

Yet, he talked about the tremendous support that he’s received from his law firm and its Ottawa managing partner. He told everyone how he’s able to have honest conversations with his family.

“I can tell you, when you’re not feeling up for much at all and you don’t feel like your community supports you, understands you, is empathetic to what you’re going through, it makes it a hell of a lot more difficult,” said Cudney, who was also an award recipient that night.

During the reception, the foundation’s Tracey Welsh managed to pull Alfredsson away for a few minutes to try out the brand new Monopoly Ottawa game. All of its proceeds are going to local children’s charities, including The Royal’s DIFD.

Alfredsson chose to play with the Eleven token, which was created in honour of his old hockey jersey number.

The Royal’s president and CEO, Joanne Bezzubetz, spoke about The Royal’s future, and its plans to do a better job of helping the public beyond the confines of its hospital walls.

“We’re going to put ourselves on wheels and reach out to our clients and family members. We’ll set up shop with partners in the community who are already in your neighbourhoods to make it easier for people to have services.

“We’re on a mission to transform ourselves and we want to remove those barriers.”