Nicki Bridgland still remembers the summer night in 2003 when her bold decision to leave the fast-paced corporate world and launch a new sports and fitness venture in Ottawa really hit home.

She was at Twin Elm Rugby Park, watching a bunch of adults act like carefree school kids at recess while playing ultimate frisbee, flag football and soccer. They were members of a new organization she’d started earlier that year, the Ottawa Sport & Social Club, to provide co-ed recreational opportunities to the 18-and-over set.

She says she knew then and there that trading her high-tech executive post for hijinks on the field was the right thing to do.

“I stood looking out from the veranda of the clubhouse and feeling such delight knowing that I was making such an impact in people’s worlds from a healthy, active living and wellness perspective, but also from their social side,” says Bridgland, 47, who grew up in Ottawa, studied commerce at Queen’s and worked in Toronto before relocating to northern California in 1998, where she spent several years in business development at software firm PeopleSoft.

“Part of a healthy life is a vibrant social life. It’s easy to take life so seriously. My motto here is this is supposed to be fun. To be able to just have fun, even if it’s just an hour, it’s like any financial worries, any family worries, any health worries, get parked for that one hour, and you get to come and enjoy being here.”

By “here,” Bridgland is referring to the completely remodelled Rideau Sports Centre, the recreation facility she purchased from the RA Centre last summer.

Formerly known as the Rideau Tennis Club, the four-acre property on the banks of the Rideau River had been devoted exclusively to tennis for its entire 105-year existence up to last fall.

But the private club’s membership base of about 250 was aging fast, and Bridgland decided to completely overhaul the Rideau’s business model in an effort to appeal to a new generation of customers who wanted a wider variety of sports and weren’t keen on being locked in to year-long commitments.

“I like to think of it as cross-pollination,” says the 2010 Forty Under 40 recipient, who won’t reveal how much she paid for the club but says she’s invested $3 million in the entire project so far.

“It’s opening the doors to everybody, not just to a select few, and offering many different reasons for people to come here. To be relevant to the community, we needed to bring in different services and different offerings and different sports.”

To that end, the rebranded facility will now be open to the public. It will still offer six-month passes for tennis, but casual users will be allowed to rent courts by the match as well.

Bridgland is also making a concerted effort to cater to families, offering Summer and March Break camps for kids.

“It’s an older demographic that is typically drawn to private-membership (clubs) and an affluent demographic,” Bridgland explains.

“What we’re noticing is that with the younger generation, they’re looking not for one big investment in one place, but to be able to come and go and use (the facilities) as they please.”

Since taking over the property last August, Bridgland and her team have given it a full-scale makeover, adding a new restaurant, yoga studio, massage clinic, a revamped fitness facility and community gathering space to the clubhouse.

The two existing inflated domes that offered tennis exclusively were replaced and state-of-the-art LED lighting installed, with resurfaced hard courts for tennis put in one dome and new flooring for volleyball and basketball courts in the other. Bridgland is also spending $200,000 on eastern Ontario’s first pad for dek hockey, an outdoor sport similar to ball hockey with three players a side who compete on a plastic surface surrounded by hockey boards.

“I think it’s going to have huge popularity,” she says. 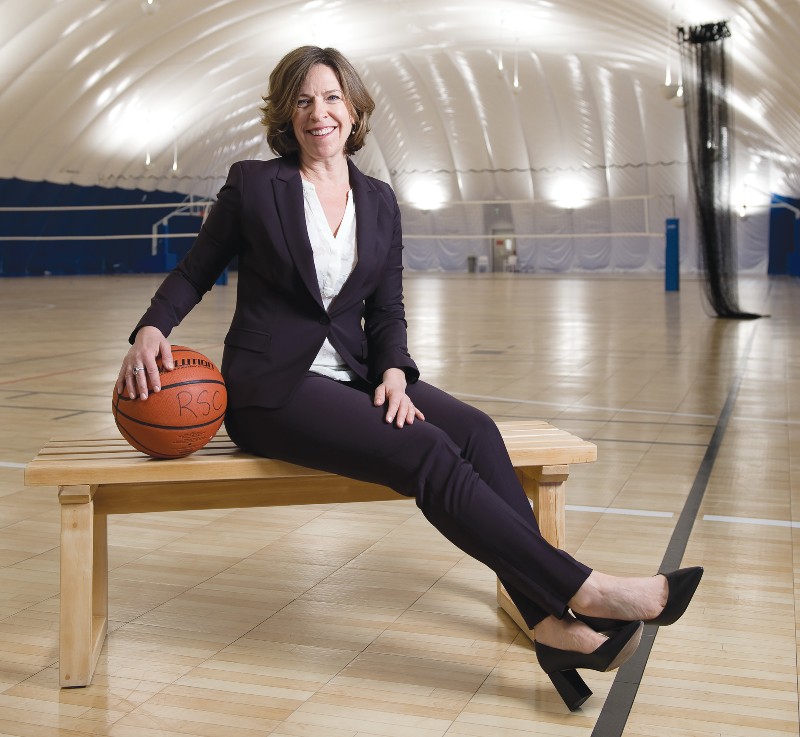 Bridgland concedes a few past members were wary of the changes at first. But she says most have been quick to embrace the new concept and expects to see many of them back this season.

“I think this first year will be really interesting,” she says. “It’s been a really beautiful process of getting to know the … former members and them getting to know us. This first year is really asking them to support us, so they can experience the offering that we have and how great it’s going to be.”

The National Capital Commission, which owns the land, had to sign off on the change in ownership. Bridgland’s lease with the NCC has 17 years remaining, but she’s already working on an extension and a possible expansion of the club’s footprint so even more sports can be added in the future.

“It’s wonderful to see the renewal of this historic establishment in Canada’s capital region that is now open to the public,” he said.

Bridgland is also collaborating with renowned Ottawa architect Barry Podolsky on the second phase of the renovation. Her plans include expanding the restaurant closer to the river, replacing the 155-seat covered patio on the second floor with new event space, installing a new veranda and adding a dock for kayaks and canoes.

Her ultimate goal, she says, is to the make the new-look Rideau Sports Centre more than just an athletic club.

“It’s a social community and a place where people come to relax, rejuvenate and connect with others who have become friends,” says Bridgland, who continues to own the Ottawa Sport & Social Club as well as its sister associations in six other Canadian cities. “This is really a manifestation of everything I’ve done in my career so far.”