The Welch LLP Ottawa Business Growth Survey is a comprehensive annual research project that explores what’s ahead for the city’s economy based on surveys with hundreds of business leaders. Read their insights and understand the factors shaping business confidence in Ottawa, in this exclusive report.

In a sign that COVID-19 will continue to cast a pall over the local economy for several more months, slightly more than one in five respondents in the Welch LLP Ottawa Business Growth Survey say their organization plans to reduce the size of their employee headcount in the current fiscal year.

To put that number in context, that figure had previously never been higher than seven per cent since 2016.

But the pandemic is not affecting all businesses evenly; despite the high number of organizations forced to lay off employees, an even higher proportion – one in four – say they plan to hire new staff. That’s down significantly from 49 per cent in 2019. 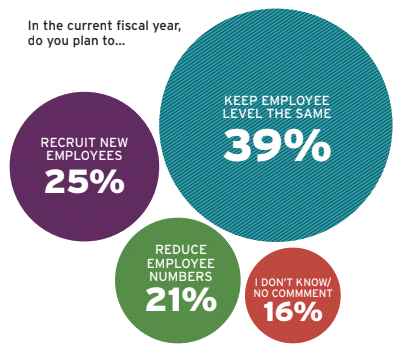 Parts of the Welch LLP Ottawa Business Growth Survey paint a polarizing picture of the city’s economy. When it comes to hiring intentions, for example, the proportion of respondents who said they plan to reduce employee numbers is almost equal to the number saying the opposite – that they plan to recruit new staff members in the coming year.

Observers say that reflects the uneven economic impact of the pandemic.

“The diverging fortunes of various industries is a challenge for many employees – this includes individuals who are, or were, employed in industries that have been severely impacted by COVID-19,” says Welch LLP partner Jim McConnery. “In some cases there is an expectation that the relevant industry will recover in the future, however, the timing and strength of the recovery is very uncertain.”

McConnery adds that some employers have had access to the Canada Emergency Wage Subsidy program as a means to maintain employment levels notwithstanding material declines in revenue. There are also a myriad of training programs that provide support to individuals that want to repurpose their skills.

“We expect that the federal and provincial governments will dedicate more funds to such programs as part of our long-term recovery initiatives,” McConnery says.

“A lot of these companies have long-range contracts which serve them well and allow them to navigate through with little volatility,” he says. “That shows a lot of resiliency.”

But it’s a starkly different picture for the city’s retailers, says Mark Kaluski, chair of the Ottawa Coalition of BIAs.

“The brick-and-mortar sector has been absolutely devastated,” he says. “They saw their sales essentially drop to zero in a day, and while some revenue is coming back, it’s definitely nowhere near where they were.”

This harsh new reality explains the overall dramatic decrease in business confidence, says Kaluski, as well as the fear that the market will only get worse as businesses continue to fall into debt with little to no economic relief on the way.

“The biggest issue we’re seeing is the accumulation of rent,” says Kaluski. “Not only have these business owners lost revenue, but now they are accumulating debt every month.”

While business confidence has reached an all-time low in Ottawa, Tremblay says it is important to remember that the city has seen hardship in the past and has always recovered and grown stronger.

“Some companies won’t make it through this, but the majority of them will,” he adds. “One thing is certain: At the core of it, we have great talent, and that talent will be able to persevere.”

Read the full 2020 Welch LLP Ottawa Business Growth Survey report by clicking on the cover below: 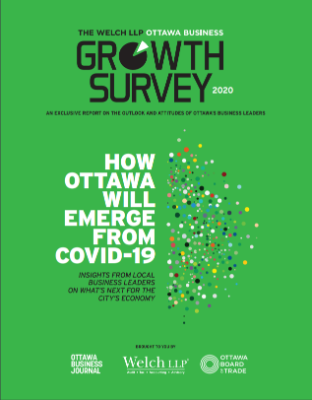