An earlier version of this story incorrectly stated the Centretown location of a planned Lamb Development project. The story has been corrected to note that it was on Bronson Avenue, south of Gloucester Street.

Never afraid to express his opinions, Brad Lamb is characteristically blunt in his assessment of his latest condo-building exercise in Ottawa.

Bold and sometimes brash, Lamb has made a name for himself over the past couple of decades as one of the GTA’s leading condo builders – according to its website, his Lamb Development Corp. has sold more than $1.3 billion worth of properties since it was founded in 2001.

Here in Ottawa, however, Lamb’s forays into the market have been comparatively limited.

The firm has just one finished project, the 240-suite Gotham highrise on Lyon Street in Centretown. Another planned 350-unit condo on Bronson Avenue south of Gloucester Street never came to fruition. Lamb said he sold the land to a Quebec apartment developer a couple of years ago, because he was “tired of banging my head against the wall” trying to drum up enough interest to justify the project.

Still, Lamb hasn’t totally turned his back on the nation’s capital. His second Ottawa condo, the 20-storey, $90-million SoBa development, is set to open next year with 218 suites. 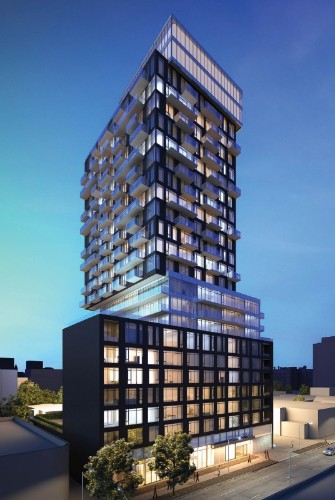 It’s been a project more than five years in the making for the man known as “Toronto’s condo king,” who said he bought the land at 203 Catherine St. “for nothing” but then “struggled mightily” to hit the 60 per cent mark in pre-sold inventory that’s his minimum threshold for putting shovels in the ground.

“We started selling SoBa in a very bad time for Ottawa real estate,” he said during a recent stopover in the capital to deliver a real estate seminar. “It was one of the worst (markets) for a long time.”

Lamb said the local economy suffered for years under a Harper government that cut federal spending. Developers didn’t help themselves, he added, by going on a building spree that flooded the market with new inventory just as potential buyers started tightening their pursestrings.

“We overbuilt, and everyone got burned, from Claridge to Lamb to Urban Capital to all the other guys,” he said. “It’s a small enough real estate condo economy, 500 units is tons of money. Developers …  are very faddy. Everyone rushes to a city and builds condos and then we fuck ourselves by overbuilding. You couldn’t sell anything for years.”

Recently, however, the market has turned. According to the Ottawa Real Estate Board, condo sales rose more than 14 per cent year-over-year in July and were up 16.5 per cent over the first seven months of the year.

Lamb attributes that to renewed confidence in the local economy, fuelled by a Liberal government that began hiring again and construction projects that have kickstarted an employment boom. It helps that a typical condo in Ottawa costs less than half of the $605,000 the average buyer will shell out in Toronto, but there’s more to it than that, he explained.

“Part of it is price, but more of it is a general sense of well-being,” Lamb said. “If you feel that you’re going to have a job tomorrow, you might rent. If you feel you’re going to have a job in three years, you might buy. You make long-term plans. I think people in Ottawa were not making long-term plans four years ago, maybe even two years ago, but now they are.”

Ottawa is still a buyer’s market, he said, but maybe not for much longer.

“Two years ago, there was 18 months of supply of unsold condos. Now there’s two. Two years from now, people will look back and say, ‘Wow, I could’ve bought condos for $540 a (square) foot and now they’re $700 a foot. It’s a lot of money that’s going to be made in the next two to three years as long as the wheels don’t come off the economy – and I don’t think they’re going to.”

After putting the brakes on new developments for the past couple of years, condo builders are eager to start satisfying pent-up demand, he said.

“As the inventory gets down close to zero and it tightens up, you’re going to see more and more developers announcing projects.”

“As the inventory gets down close to zero and it tightens up, you’re going to see more and more developers announcing projects,” predicted Lamb, who said he’s hearing “bold new ideas” for future properties, fuelled in part by foreign buyers looking to invest in markets beyond Toronto and Vancouver.

“The city of Ottawa is going to change dramatically, I think, over the next three years, just because there’s so little to buy.”

Lamb, who likens himself to “a rapacious, hoarding squirrel that loves buying real estate and dreaming up ideas for it,” called Ottawa a city that “punches above its weight.” He thinks projects such as LeBreton Flats, the Zibi mixed-use development on Chaudière Island and the rejuvenation of Lansdowne Park signal a new era of prosperity for the capital, and he’d like to be a bigger part of it.

“My attention will come back here,” he said. He’s launching a couple of hotel developments in other Canadian locations, he noted, and he mused about returning to build a “really cool four-star hotel, which this city doesn’t have yet.”

Warming to the topic, he rhymed off the amenities it would feature: a minibar, an ice machine in every suite, room service “that is actually food you want to eat, with a healthy bent to it as well,” a “comfortable and clubby” bar, “maybe a speakeasy in the basement,” a restaurant “that everyone wants to go to with a great chef” and “a swimming pool on the roof with girls hanging around in bikinis.”

Lamb is well aware it’s not the exactly the kind of plan that screams “Ottawa,” and that’s his whole point.

“But Ottawa would like it,” he said with a grin.

Quiet as a lamb? Never.