An Ottawa company believes its high-tech ethical directory is the search tool vegan eaters have been craving.

Ethical Tree is a directory for vegans, vegetarians and other ethically-minded eaters to find restaurants and health food stores that cater to their preferences. The website has tags for dietary restrictions and preferences, whether ingredients are organic or fair trade, and even if the business is owned by a woman.

Though Ethical Tree has its roots in Ottawa, it recently expanded to the Greater Toronto Area with a fresh new version of its website. Co-founder Siavash Ghazvinian says he honestly wasn’t convinced when his friend Frank Ferris approached him with the idea two years ago after the process of finding a restaurant that checked all the boxes left him frustrated. It was an interesting concept, Ghazvinian recalls, but with incumbents in the space such as Happy Cow and Yelp and no web development experience between the two of them, the task didn’t seem worth the effort back then.

It only took Ferris a few months of work to come up with a prototype that had a better search function than the firm’s competitors, Ghazvinian says, and that was enough to get him on board.

“At that point I said, ‘OK, you definitely proved me wrong.’”

Ethical Tree hopes to differentiate itself from the aforementioned competitors in a few key ways.

The biggest difference is in the full spectrum of search preferences on Ethical Tree. Ghazvinian says there are sites out there that filter for each of the company’s tags, but none that does all of them in one place.

The team has gotten a bit of flack for including women-owned businesses as a differentiator, which disappoints Ghazvinian. While running a restaurant is difficult for any owner, it’s been well documented that women face obstacles in entrepreneurship that men don’t, such as lack of access to capital or being told they don’t fit.

It’s an issue the Ethical Tree team is passionate about, and by including the tag, it could mean a lot to a user who shares that passion.

Another element Ethical Tree is hoping to outclass the competition on is accuracy, and the company has turned to a high-tech solution to do so.

Joining Ghazvinian and Ferris on the team is Willy Collins, a developer at SurveyMonkey. He’s helped the team develop an algorithm that can crawl across businesses’ websites, Yelp, Google and Facebook profile to detect any changes in offerings or opening hours. Ethical Tree receives an immediate flag to check the information and update what’s in the directory.

Ethical Tree’s business model revolves largely around premium sponsorships on the directory itself. The company’s supporters, which include Rainbow Foods, Hareg Cafe and Mad Radish locally, receive higher listings on the homepage and in search results.

“Ethical Tree users like to see that there are businesses supporting us, so they go support those businesses,” he says. 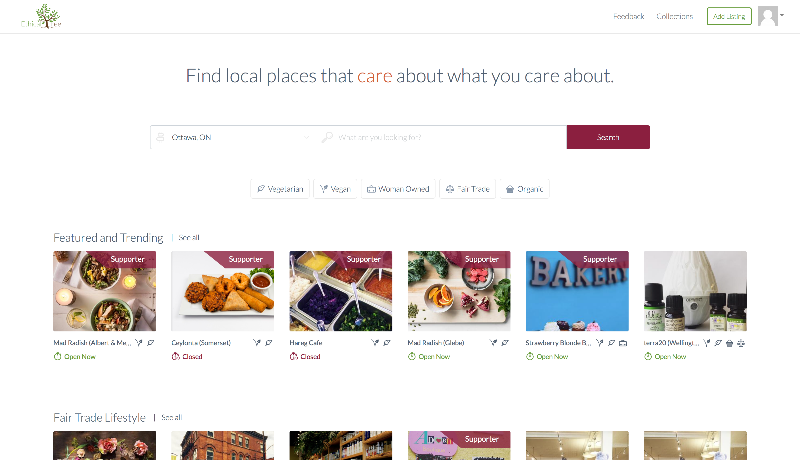 Catering to ethical and health-conscious eaters is increasingly trendy in dining. David Segal, the founder of the aforementioned Mad Radish as well as the co-founder of the DavidsTea franchise, told OBJ last year that there’s a hunger for healthier options in quick service restaurants. With his latest venture, he believes those that put veggie options on the menu are poised to feast.

“I think that the demand still far exceeds the supply,” he said.

Shifts in the market are backing up Segal’s beliefs, with brands such as McDonalds increasingly offering salads and even a new soya vegan burger to cater to the veggie crowd. The call for adopting meat-free diet has also been bolstered by recent analyses linking the industry to high greenhouse gas emissions.

“People are not only eating healthier, they are seeking out that,” Oakville-based consultant Neil Lester told OBJ last year.

Ghazvinian says he’s heard this sentiment anecdotally while pitching Ethical Tree to supporters. An Irish pub owner on Elgin Street noted to him that they were adding a vegan option to their menu, despite the vegetarian options being among the worst-selling items. It was a recognition that as social trends change, groups of friends with even one vegan or vegetarian in the pack will only go to that restaurant if there are options for everyone.

Ghazvinian and his partners believe that the easier it is to find vegan and ethical options, the better off the world, local businesses and their patrons – and Ethical Tree  – will be.