Municipal government decisions often have even more of an impact on residents of those communities than policies instituted at higher levels of government. Noted urbanist Jane Jacobs called this the “subsidiarity” principle ​– the closer government is to the people, the more likely it is to be both responsive to local needs and effective in terms of its delivery of solutions.

Here in Ottawa, the city is in the process of developing a new official plan. The goal is to develop a municipal planning blueprint that suits 21st-century conditions. It’s a lofty ambition and maybe the first of its kind, at least in North America.

To assist in that process, the City of Ottawa worked with me to find out what is important to residents of this community when it comes to key issues such as economic development, public transit and affordable housing. In an online survey, we solicited opinions from hundreds of residents in all areas of the city, representing a multitude of industries and occupations, from urban planners to entrepreneurs.

Here’s a look at the highlights.

1. Answers to the “Team Ottawa” versus “On my own” question were fascinating. 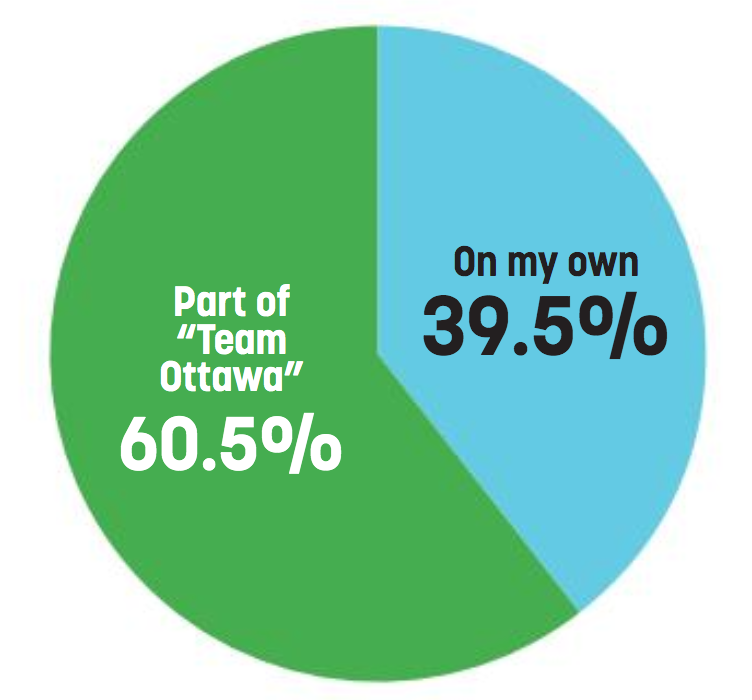 The most valuable resource any city or town has is its people. To keep the best and brightest young talent from moving to larger centres with more perceived opportunities, it’s vital that we build a municipal brand and communicate it effectively. We also need to institute a more flexible regulatory structure that allows our residents and the companies they build to develop their economic and social futures. And we need to articulate a vision that makes residents feel like they are part of something bigger than themselves to ensure we all buy in to the goal of a more prosperous future.

It is one of the most important decisions any individual can make in a lifetime. In a way, you are what your city is.

Ottawa is doing a better job of making people feel like they are part of something special than I might have thought: in my view, 60.5 per cent is not bad for a “government town.” It’s likely that, say, Calgary would rank higher in this category, but it’s still not too shabby for Ottawa. Even so, there is room to improve.

2. We expected economic development, neighbourhood safety and talent retention would rank among residents’ biggest concerns, but instead they were middle of the pack.

Instead, the top four issues were: access to affordable housing; climate change/green technologies; zoning rules that promote experimentation, densification and intensification in increasingly mixed-use, walkable communities; and the promotion of homegrown entrepreneurs.

Access to affordable housing could be a proxy for talent retention. Many tech industry veterans have said they have more difficulty retaining talent because of a housing rental shortage than attracting talent in the first place.

Second, politicians who might be inclined to ignore the public’s concern over climate change and other environmental issues do so at their peril. The issue ranked a very close second on our list.

It’s also interesting to note that respondents appear to understand the link between zoning rules that promote intensification in mixed-use, walkable communities and the promotion of homegrown entrepreneurs. There seems to be support for a more flexible official plan and policies that encourage more residents to start businesses of their own.

Major issues of concern, ranked on a scale of 1-5: 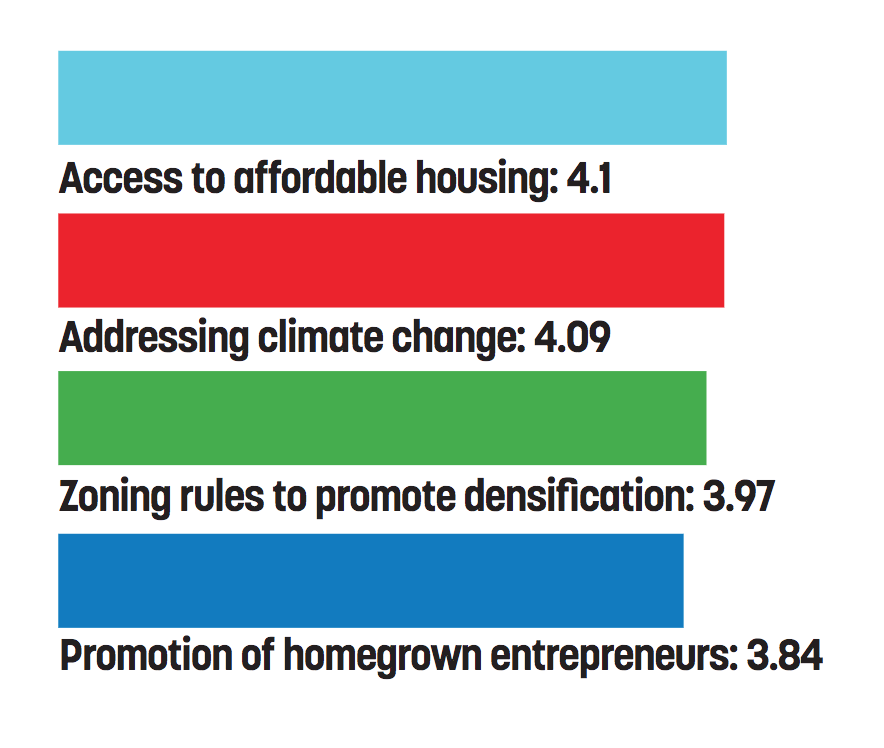 3. The lowest-ranked issues include: attracting entrepreneurs from other cities or countries; zoning laws that protect existing neighbourhoods from change; nightlife and festivals; new roads and highways; and sharing economy platforms such as Uber, Lyft, Airbnb, etc.

This group of respondents appears to embrace change and places an emphasis on local action.

4. Respondents overwhelmingly supported giving developers of office and institutional buildings a density bonus if they agree to add a residential use to their property and dispersing social, co-operative and affordable housing – including halfway houses and group homes – throughout the community.

This is markedly different from attitudes in the United States. According to the American Housing Survey, the number of U.S. households living in gated communities was slightly more than seven million in 2001, rising by more than 50 per cent to almost 11 million households by 2009. A decade later, the process continues to separate U.S. cities into have and have-not zones.

More egalitarian Ottawans appear to support (at least indirectly) the Ontario Planning Act, which prohibits gated communities, unless they are condominiums.

5. Nearly as important as the above two issues was the urge to design neighbourhoods for people rather than cars. Nearly 85 per cent of respondents supported this idea, which means there is probably a widespread hunger to see more use of “Woonerf” (a Dutch word meaning “living”) streets where cars are guests and pedestrians and cyclists have priority.

6. Every city has its own “magic wand” – the legal authority to create or change zoning bylaws and ordinances. In many jurisdictions, this has become a vastly complex, expensive and time-consuming democratic process. Ottawa is no exception.

More than three-quarters of respondents agree the city should use its “magic wand” (that is, its own staff and resources) to help with planning approvals and costs for projects deemed to be of regional significance and a net benefit to the city.

The city seems to have read its electorate accurately with a continuing “freeze” on (most) urban boundary expansions.

8. Nearly half of respondents were not aware that coach houses are now permitted in Ottawa (where they’ve been allowed since November 2016), suggesting the city needs to do a better job of communicating such changes to residents. In addition, almost three-quarters of respondents want the city to do more of this type of urban experimentation.

9. More than 85 per cent of respondents supported the notion that the city should be more proactive in building an inventory of ready-to-use sites so the region can react quickly to changes of direction in the local, national and global economies.

In other words, the next time a mega-corporation like Amazon comes looking for enough land to house a one-million-square-foot building that employs hundreds of people, the city would be well-served to have a list of available, ready-zoned sites sitting on the shelf, so to speak.

This is not just an Ottawa issue or even a Canadian issue. It is happening everywhere. Homeowners in desirable cities are happily watching their house prices soar while young people and those less fortunate struggle to obtain any type of affordable accommodation, let alone home ownership.

11. I doubt anyone would classify themselves as a NIMBY (someone who nearly always opposes any changes in his or her neighbourhood, short for “not in my backyard”), and this survey suggests Ottawans are no different: nearly two-thirds of respondents classified themselves as YIMBYs (“yes in my backyard”). Yet roughly four in 10 said they “have appealed or have been part of an appeal against developments in my neighbourhood or city.”

Ottawa, of course, is well-known provincially for being a source of abundant planning appeals, so this result should really come as no surprise to those in our own backyard.

Bruce M. Firestone is a co-founder of the Ottawa Senators, a broker with Century 21 Explorer Realty and a business coach.