Cubicles and generic floorplans are becoming an increasingly rare sight in some corners of Ottawa.

A new generation of companies are no longer interested in an open-concept work environment filled with individual desks. Instead, architects are challenging business owners to look at that big empty floor plate in a whole new way.

“We are seeing office environments where there is dedicated space for collaboration, for whiteboard sessions, for cafes and for interactive space,” says Toon Dreessen, president of Dreessen Cardinal Architects and past-president of the Ontario Association of Architects. “We are now creating spaces where people can come together and solve problems and they are not stuck at a boardroom table.”

It’s today’s technology that allows employees the flexibility to move through a building without sacrificing their ability to work.

“Computers are becoming so much smaller, lighter, faster and more portable – you are not tied to your workstation anymore,” Dreessen says. “Business is now done on cell phones and mobile devices. People are able to deal with an office call, and if it becomes too noisy in the environment they can get up quickly and go to a quieter space.”

Such conversation nooks and impromptu meeting places are popping up in offices across Ottawa, including at Shopify’s headquarters inside Performance Court at 150 Elgin St. 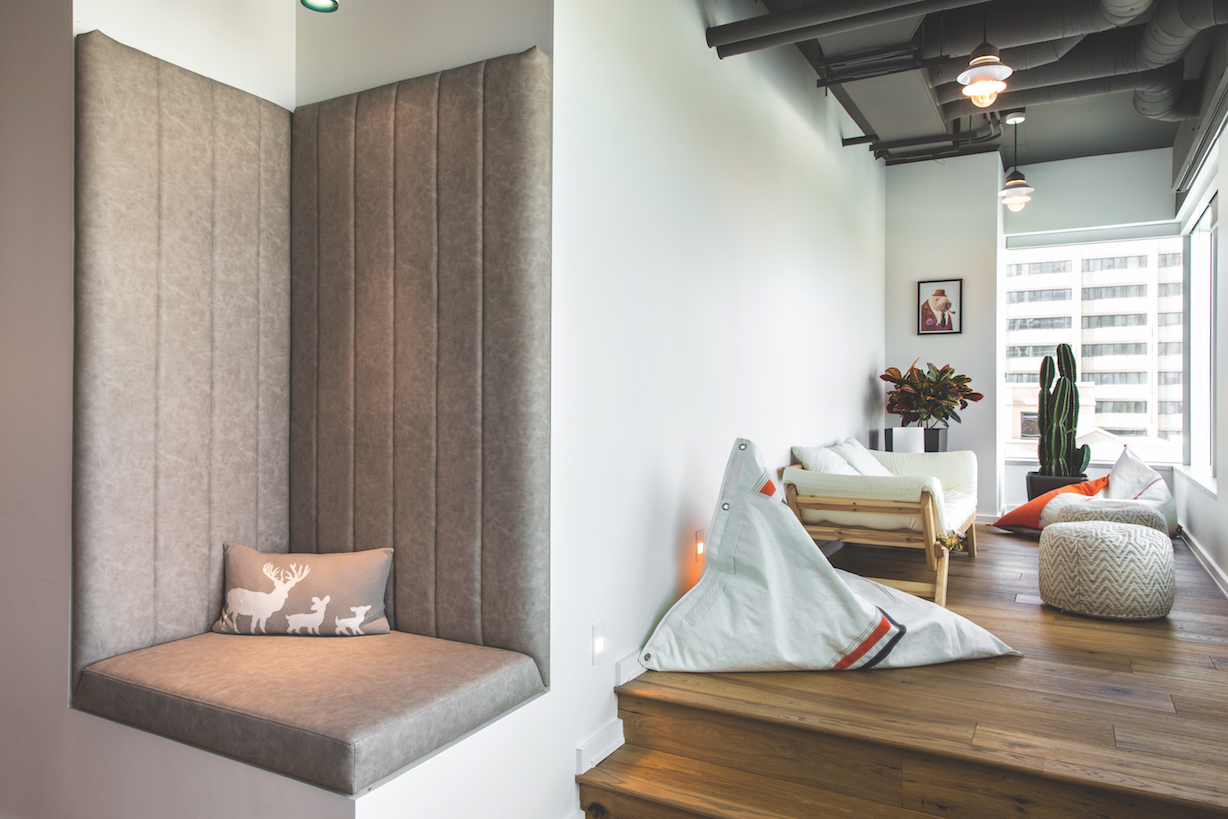 “I believe that strong architecture can positively change a company and how it works,” says Andrew Reeves, senior architect and the owner of Linebox Studio, which designed Shopify’s space.

He explains that one of the core objectives in preparing the space for the local e-commerce giant was to enable employees from different parts of the company to informally collaborate.

“When we set out to do Shopify, they were concerned that people would stop interacting with each other – so we wanted to create a vertical pathway in the building to allow for ‘accidental encounters.’”

– Andrew Reeves, senior architect and the owner of Linebox Studio

“When we set out to do Shopify, they were concerned that people would stop interacting with each other – so we wanted to create a vertical pathway in the building to allow for ‘accidental encounters,’” Reeves says.

“The staircase we created is a place that connects the building, and where people could pull over and have a conversation.”

Linebox is currently designing an additional floor in Shopify’s Montreal office, along with plans for six floors in Toronto and two at Shopify’s Waterloo hub. But one of the biggest jobs Linebox has in its queue is the redesign of Shopify’s new space inside the former Export Development Canada building at 234 Laurier Ave. W.

Some 18 floors will be developed into a “tiny town” for Shopify’s 3,000 employees.

“It will have daycares (and) restaurants scattered throughout the building,” says Reeves. “Promoting opportunities for interaction with each other helps foster relationships within departments.”

Meanwhile, a few blocks north, Linebox is turning the former movie theatres inside the World Exchange Plaza into a new home for Ottawa tech firm Klipfolio.

Linebox has spent months working with the local business dashboard software developer to create a picture-perfect office environment for the rapidly growing company, which is expected to move in this December.

The dimensions in the 24,000-square-foot area posed some interesting design dilemmas for Linebox.

“It was this crazy huge space with 30-foot high ceilings,” Reeves says. “We had to gut it to the core, and then work to keep the acoustics under control and develop lighting systems that would help add character to the space and create different inspiration moments.”

In the case of both Shopify and Klipfolio, a deliberate move was made to set up shop in the downtown core.

“I think it’s part of a larger move, and a very smart move on both tech companies and the city,” says Dreessen. “Being downtown means being part of the vibe and the excitement of the city and having your office in an area that’s walkable, bikeable, easily accessible by transit and where there are great places to go for lunch. It’s a very attractive lifestyle to the type of folks that work in an IT or tech company.”

As more companies set up shop in urban centres, building owners are able to capitalize on the movement and breathe new life into worn-down and outdated buildings.

According to Dreessen, the first thing building owners should do is gather as much information as possible, including any existing drawings of the building – and talk to an architect early.

From there, the architect can come up with creative ideas that transform the space, making it more attractive to potential clients. Those initial quick sketches are then tools the building owner can use to attract new tenants and show them the possibilities of the interior and exterior of the building, and how it can be customized and branded to a business.

Dreessen says his firm is currently working on a major reinvestment of an older downtown office building that currently offers minimal interaction with the surrounding urban environment.

“We are recladding the building in flexible transparencies of stainless steel fabric so that it doesn’t look like a drab 1970s office building, but starts to take on a really dynamic, flexible movable form that moves and shifts with the wind, and also has a functional purpose by providing extra shading to the building,” he explains.

Right now, the building is very closed off to the street and difficult for pedestrians to access. Dreessen and his team have designed a workaround to help change the dynamic of the building, including the addition of open-court dining and market space.

“(We want to) invite the public to wander through the building and interact with the people who work there and have that kind of connectivity,” he says.

The project is in the early stages of development, but Dreessen expects construction to begin in early 2018 and wrap up by the end of the year.