Ottawa mayor decides to donate years' worth of memorabilia to charity as he prepares to officially leave office Nov. 14th

They came. They bid. They raised close to $4,000 for the Ottawa Food Bank at a silent auction involving years’ worth of swag that outgoing Mayor Jim Watson accumulated during his time in office.

There were hundreds of items, with some grouped together to create 68 packages to bid on.

Watson said he couldn’t, nor would he want to, take it all with him. He might as well use the gifts to raise money for a good cause, he figured. “You don’t need, like, 50 hockey jerseys,” said Watson, adding that he only needs one jersey each to wear to the Sens and RedBlacks games.

While the municipal election takes place on Oct. 24th, Watson’s last official day is Nov. 14th. He’s done three consecutive terms and is the longest-serving mayor in our city’s history.

The end-of-term silent auction was open to the public and organized by the mayor’s press secretary, Patrick Champagne, who started in the mayor’s office nearly six years ago as a student intern.

It was no surprise to see food and refreshments from Tim Hortons in the form of Timbits, coffee and tea. “It’s on-brand,” said Champagne, referring to past receptions hosted by the mayor, featuring treats from Timmies.

As for music (because every gathering requires music), Ottawa piano player and singer Dave Kalil, 2022 recipient of a Mayor’s City Builder Award, helped out by tickling the ivories on the baby grand that’s a fixture at Ottawa City Hall. He played and sang a bunch of familiar tunes. As for silent auction items, it was the Ecuador-made panama that caught the eye of Peter Honeywell, retired executive director of the Ottawa Arts Council and current board member with the Ontario Nonprofit Network. He got it for a steal, at just five bucks.

Many of the items brought back memories for Jeremy Wittet, who used to work for former councillor Jody Mitic when he was the city’s sports commissioner. “I recognize a lot of this stuff,”  Wittet, a senior director with PR firm Edelman and vice board chair of the Ottawa Catholic School Board, said as he perused the auction tables. His motivation for coming out that night was to support Watson and the food bank, and to catch up with some old friends.

It was a blast from the past to see public affairs professional Adam De Caire. He was up from Toronto for work meetings and, having caught the mayor’s tweet about the charity auction, made a point of dropping in.

De Caire was at one time Watson’s longest-serving employee, having started with Watson when he was a member of provincial parliament. Chief of staff Serge Arpin has now worked for Watson the longest, closely followed by community relations specialist Danielle McGee, who only recently left the mayor’s office to join Ottawa Community Housing Corp.

De Caire owes a lot to Watson, professionally and personally. He met his future wife, Katie McMillan, at a 2010 Canada Day party that he was obliged to attend with Watson. McMillan had been working at the time for Watson’s sister, Jayne Watson, from the National Arts Centre. It’s a full-circle story because Jayne’s daughter Nicola Froislie now works for McMillan in Toronto at St. Michael’s Hospital Foundation.

By the end of the two-hour silent auction, at least 90 per cent of the items were gone — including the Chinese dragon boat head. It was bought by social entrepreneur Alek Golijanin, who left with probably the largest haul of sports memorabilia and artwork. “I’m just happy I was able to get this stuff and they were able to raise some money,” said the auction-bidding machine, who later asked Watson to autograph one of his new hockey jerseys for him.

The auction wasn’t the first time the mayor has helped out charity when exiting a job. He contributed his entire municipal severance payment of $31,000 to The Ottawa Mission when he temporarily left municipal politics to become president and CEO of the Canadian Tourism Commission in 2000. 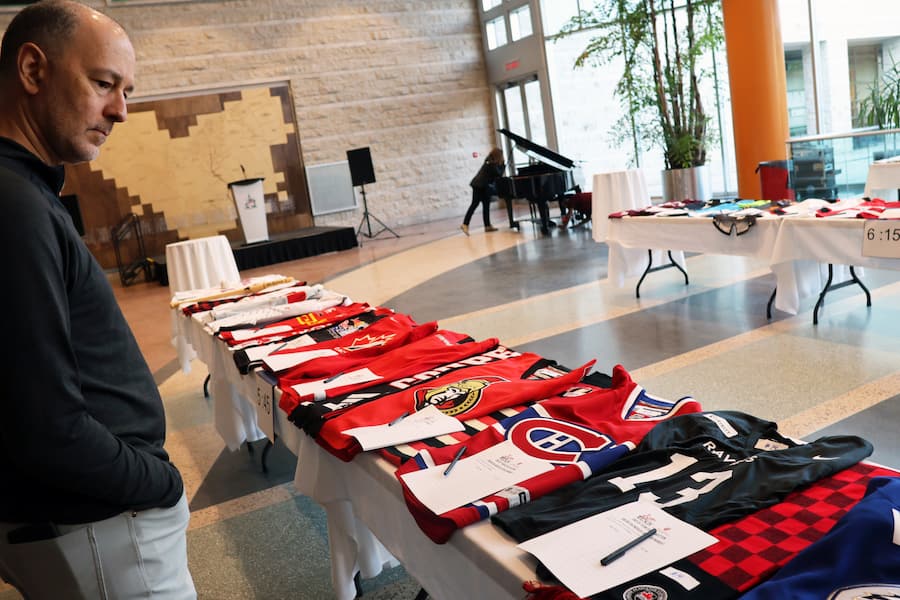