Patrick Burke says they clicked right away. There was a chemistry, a feeling of familiarity even though they’d only just met.

The former Torontonian moved to the Glebe in October 2020, after his partner’s new job opportunity brought them to Ottawa. He immediately felt welcomed.

“I just really fell in love with the neighbourhood,” said the experienced communications professional and new executive director of the Glebe Business Improvement Area (BIA). He officially assumed his role in November after predecessor Andrew Peck left to become the new ED of the Downtown Rideau BIA.

The Glebe, which is considered a vibrant and desirable area to live and work, is bordered by the Rideau Canal to the south and east, Hwy. 417 to the north and Bronson Avenue to the west.

“Everything you need is here; everything is so close,” said Burke during an interview at the Glebe BIA office located on Bank Street near Fifth Avenue. “A community spirit runs through the whole neighbourhood, and the businesses are a big part of that. They make you feel at home and take care of you.”

“I think we’ve been very fortunate, with such strong and loyal support of people from the Glebe and beyond who have shown up and bought local.”

Burke, 39, has joined the organization at a time when the dust is settling on the pandemic.

“It’s been hard on everybody, including our businesses, but they’ve all been working very hard. If they’re there, it’s because they love what they do and the community that they serve, and the community loves them back.

“I think we’ve been very fortunate, with such strong and loyal support of people from the Glebe and beyond who have shown up and bought local.”

The past two pandemic years were not without a few business casualties among the 370-plus members of the Glebe BIA. Yet a bunch of new stores and restaurants have or are in the process of opening up, he noted. Perhaps the newest kids on the block are the cannabis shops. There are currently five with another to come.

The proliferation of pot retailers is a concern Burke has been made aware of.

“It’s obviously an issue that main streets everywhere are dealing with,” he acknowledged. “These stores are all our members. We advocate for them, for any store to survive, especially in the Glebe.”

Whether the cannabis retailers all remain open “is tough to say,” said Burke. “I hope that they’re all successful. I think only time will tell.”

Another issue for businesses is street parking and “just making sure the Glebe continues to be accessible for as many as people as possible,” said Burke.

On the subject of accessibility, it’s business as usual (or as usual as it can be during a pandemic) in the Glebe, which is located south of the ongoing “Freedom Convoy” protests and blockades taking place downtown. 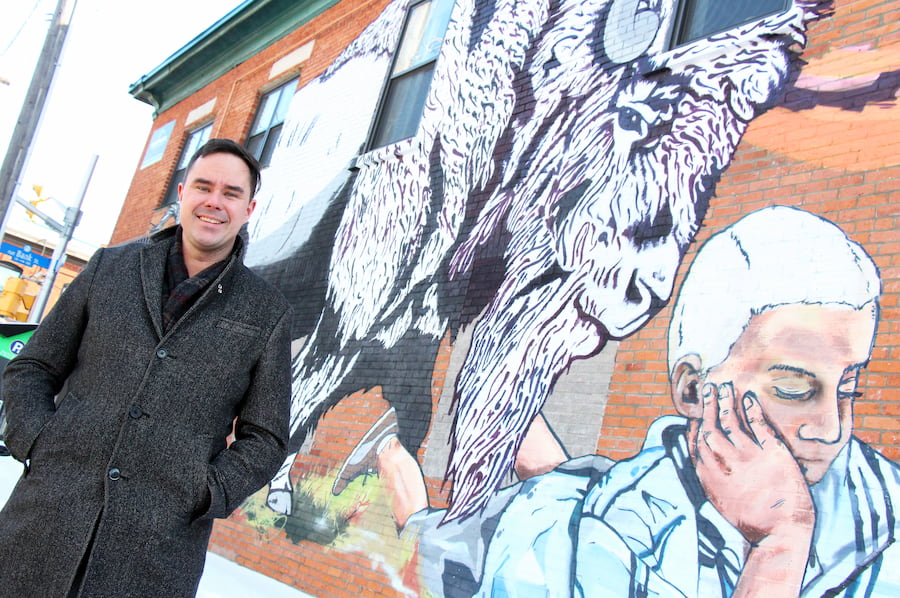 Prior to the Glebe BIA, Burke was working in Ottawa as director of public affairs at scholarship and exchange program Fulbright Canada.

He spent a few years as communications manager for the Toronto Financial District BIA and, before that, worked at Queen’s Park in advisory and liaison roles for Liberal provincial cabinet ministers.

“My job was to help MPPs from across the province respond to their constituents’ questions and concerns,” Burke explained. “I was dealing with day-to-day issues and finding practical solutions for people. The key was to find a solution that worked for the person asking and the broader community. That’s been great experience for the BIA world, where I’m working with our businesses and members of the community every day.”

On the topic of Lansdowne, Burke said work has been done on all sides to make the neighbourhood a more unified community. Some Bank Street businesses have held an us-versus-them mentality in the past toward Lansdowne, a 40-acre destination located in the south end of the neighbourhood.

The former dilapidated fairground reopened in 2014 after being redeveloped through a public-private partnership. It kept its Aberdeen Pavilion and Horticulture Building while adding shops, restaurants, condos, offices, a cinema and urban park.

Lansdowne normally draws thousands of visitors to its TD Place Stadium for sporting events, concerts and other attractions.

“That’s a mutual benefit,” said Burke of visitors who wander up Bank Street, seeking out smaller restaurants, shops and services.

Glebe BIA board chair Stephane Sauvé, owner of the Glebe Meat Market, believes things are looking up for the neighbourhood.

“I think we’re a pretty resilient group, and we’re going to see this through, including the blockade. There are better times ahead, for sure. You have to look at it that way – otherwise you’re going to get too depressed.”