The last time Chris Knight threw a big Gusto party was almost four and a half years ago, to celebrate the launch of his new food and lifestyle specialty channel. The memorable evening was held at the Canada Space and Aviation Museum.

“A lot has happened since then,” Knight, president and CEO of Gusto Worldwide Media, told some 250 guests of Tuesday’s official grand opening party.

He wasn’t just talking about the baby daughter that he and wife Taryn Manias welcomed into their lives 14 months ago. Or, about the way his son, Adam Knight, seems to have suddenly grown up, and is now studying at the University of Toronto.

Since that party, Knight has opened a 13,000-square-foot TV studio facility and head office in Ottawa, in the St. Laurent Business Park. The new space — which includes a 3,500-square-foot soundstage, post-production facilities, a 1,000-square-foot commercial kitchen and on-site workshop — marked its official opening with a ribbon-cutting ceremony that saw Mayor Jim Watson handling the giant scissors like an experienced politician.

“This is where we come to make TV shows and then bring them out to the world, to make people feel better, hopefully for a little while,” said Knight, while joined by the hosts of three of his TV cooking shows, Jasmin Rose Ibrahim (One World Kitchen), Jessica McGovern (Flour Power) and Spencer Watts (Fish the Dish). “This is a really creative and very fun place to work.”

Knight had lobbied extensively to get the city more involved in the film and television industry.

“He, quite frankly, pushed us to get a studio and just gave up on us and built his own studio,” the mayor said in his brief remarks. “That’s the kind of guy Chris is; he doesn’t take no for an answer.”

Knight invested more than $1 million in the new studio.

“Because of his commitment to our city, we have dozens of people employed here and we have this amazing facility in the south end,” said Watson.

“Your dream has come true,” the mayor told Knight. “You should be very, very proud.”

Knight acknowledged that there are challenges to basing his company in Ottawa.

“We choose to do this here because this is a great city to live in and a great city to raise a family,” he told the room. “We look forward to being here for many, many years to come, and to doing lots of television.”

It was not lost on the entrepreneur that his new studio and head office is near to his childhood home, one of the first to be built in the south Ottawa neighbourhood of Elmvale Acres, on the north side of Walkley Road.

Knight was born in Glasgow, Scotland. He came to Canada as a kid in 1963. His father started a construction company with the late Robert Campeau, building most of the houses in Elmvale Acres, Playfair Park and Alta Vista.

“It’s full circle,” he remarked of his return to his old neighbourhood.

The event fulfilled its party invitation promise to serve exceptional drinks and appetizers. It also sent guests home with gifts, such as a book of recipes from the Road Grill cooking series, an attractive package of quadruple chocolate avocado cookies, and a tastefully designed T-shirt promoting Gusto’s The Latin Kitchen series. 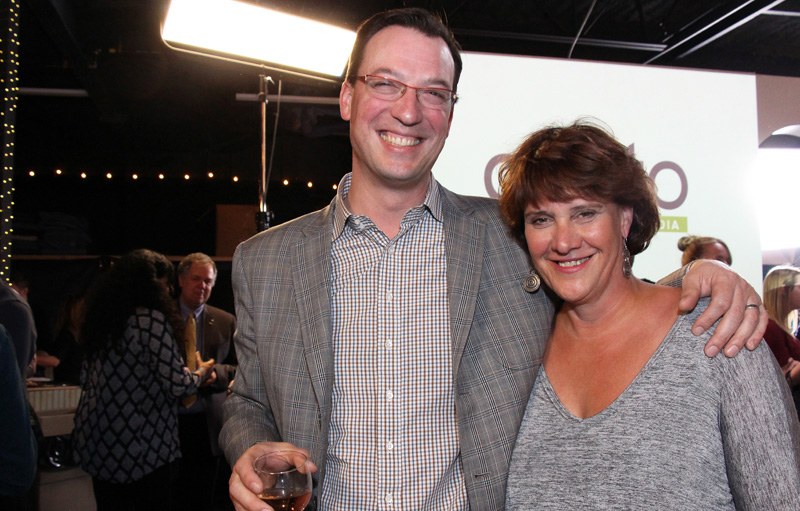