Award-winning chef Joe Thottungal is celebrated not only for his culinary skills, but also for his consistent philanthropy – especially during COVID-19.

When the pandemic first hit, Thottungal was travelling through India for a culinary tour. Hearing the news, he immediately returned home, sleeves rolled up and ready to help.

Thottungal rallied his team around Food For Thought Net Café. Founded by chef Sylvain de Margerie in 2018, the non-profit is on a mission to reduce food insecurity for low-income households, focusing on vulnerable individuals in lodgings with no kitchen, or for whom cooking is a challenge.

“It is really scary to see the food insecurity,” Thottungal says. “A lot of people are falling through the cracks.”

At first, Thottungal supported Food For Thought from his downtown restaurant, Thali, making 300 to 400 meals per day. But before long, demand rose beyond the facility’s capacity. By December 2020, representatives from the Chateau Laurier hotel had invited Thottungal and his team to use their kitchens, underutilized this winter amid the pandemic.

At the hotel, volunteer chefs use state-of-the-art facilities, cooking up to 1,000 meals per day.

“It’s like a marriage happened in heaven,” Thottungal says of the partnership. The meals are then distributed through local resource centres, food banks and more.

Fully volunteer-run, Food For Thought is supported by sponsors, including Ajay Bisaria, India’s high commissioner to Canada. Throughout 2020, Bisaria partnered with Thottungal, sponsoring meals during India’s Independence Day and Diwali.

“In normal years, we would have had a grand reception,” Bisaria says. “We would have invited a large number of Indian community members, friends of India and Canadian dignitaries.”

Instead, the High Commissioner sponsored 1,500 hot meals, 300 of which were donated to the Shepherds of Good Hope. On the menu was a vegetable curry, butter chicken and dal makhani – a dish made with black lentils, tomato, onions and cream, simmered for hours. 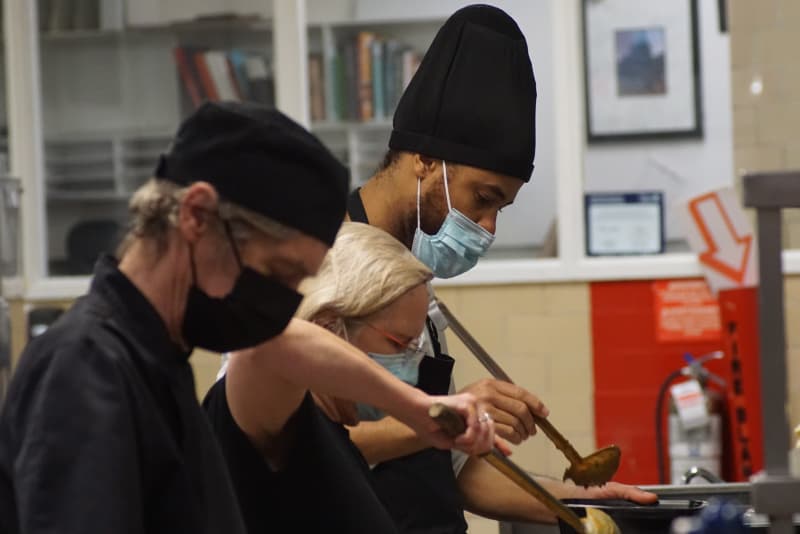 Recalling his favourite moment from last week’s event, Bisaria says, “I got an opportunity to wear an apron, be an honorary chef for the afternoon, and get a picture with all these celebrity chefs!”

Since April 2020, almost 10 per cent of Food For Thought’s meals have been sponsored by the Indian, German, South African and European Union embassies.

“The diplomatic community is really happy, because they are giving back to Canada,” Thottungal says. “I’m very honoured to be an Indian, and to be a blessed Canadian too, to support the community.”

When Thottungal opened his first Ottawa restaurant, Coconut Lagoon – also the name of his award-winning cookbook – he received a huge outpouring of community support. Through his work with Food For Thought Cafe, Thottungal aims to pay it forward.

His next step? Securing a permanent kitchen for the non-profit, so it can continue growing beyond COVID-19.

“The idea is that, if anybody knocks on our door to ask for a meal, no questions asked, we will give them a warm meal,” Thottungal explains. “(It) should be everybody’s right.”