The Dr. T. G. Mesana Endowed Team Chair in Heart Valve Disease is one of largest chairs dedicated to a cardiovascular research program in Canada

It’s the kind of story that will make your heart swell — but in a good way.

Ottawa businessman John Bassi found out at a relatively young age that he had a serious heart condition, and that he was going to need surgery at the University of Ottawa Heart Institute in order to fix it. The thought of going under the knife, and all that could go wrong in the process, made the married father of two boys nervous enough that he insisted on seeking a second opinion from another doctor down in the United States.

“Some people get five quotes to paint the house, I’m going to get a second opinion,” joked Bassi as he briefly shared the story Thursday night with more than 100 of his friends at a special reception held at Angelina’s Italian Restaurant in Manotick.

Bassi, who was fortunate enough to have the means to do so, travelled down to the States. There, he met with a reputable doctor for his consultation. “He goes, ‘So, you’re from Ottawa. Who’s doing your surgery?’,” recalled Bassi. “I said, ‘Dr. (Thierry) Mesana’. He puts his head up — true story — looks at me, closes the file and says, ‘You have one of the best surgeons in the world. Go back home’.”

So, back he went to Ottawa, where he came through his heart surgery with flying colours, thanks to Dr. Mesana. He and his wife Maria have never forgotten how the Heart Institute and Dr. Mesana saved his life, or how lucky residents are to have a world-class cardiac care facility in Ottawa.

And that’s why the couple didn’t hesitate when asked to take the lead in raising a further $2 million in order to establish a $4-million endowed team chair in heart valve disease, in Dr. Mesana’s name — making it one of the largest chairs dedicated to a cardiovascular research program in Canada. Bassi and Maria were the ideal choice to help fundraise due to their genuine friendship with Dr. Mesana and their excellent reputation in the community, said Lianne Laing, executive director of the Ottawa Heart Institute Foundation.

The Foundation couldn’t have done it without their help and partnership, she added. “This collaboration worked so well because they were the right ones and the only ones that could pull this off.”

By really embracing the project and tapping into their network of relationships, they helped the Foundation reach its goal in less than six months, said Laing. “They were a really well-oiled machine.”

Bassi, who successfully ran a family construction business for many years, is now the founder and president of JBPA Developments. Maria is the CEO of JBPA Holdings. Interestingly, one of their sons is now studying medicine and is eyeing cardiology as his possible field of specialty. Thursday’s reception at Angelina’s was a way for the Foundation to thank the Bassis and to raise a toast to them and the donors of the endowed team chair project. All their names will be engraved on a large plaque to be put on display in the Heart Institute.

There that night was lawyer Paul LaBarge (LaBarge Weinstein LLP) as board chair of the Ottawa Heart Institute, as well as its Foundation board chair Elizabeth Roscoe, senior vice president of public affairs with Rubicon Strategy. The mood was highly social as guests mixed and mingled over food and drinks. Speeches were brief and casual, which meant no podium, no speaking notes and — as it turned out — no microphone. “I can do without a mic, I’m Italian; I’m used to yelling,” joked Bassi, who spoke of how much it meant to him and his wife that so many of their friends were willing to donate to the cause. “When I called, you were there for me.” The so-called “super chair” research program is the Heart Institute’s way of honouring Dr. Thierry Mesana, who is retiring in 2024 after a decade as president and CEO of the Ottawa Heart Institute.

The Dr. T. G. Mesana Endowed Team Chair in Heart Valve Disease will be co-chaired by Dr. David Messika-Zeitoun, a cardiologist and director of the Centre for Valvular Heart Disease, and cardiac surgeon Dr. Vincent Chan.

They were both in attendance, as were the Heart Institute’s deputy director general, Dr. Rob Beanlands; Dr. Marc Ruel, who’s the division head of cardiac surgery; and Dr. Thais Coutinho, division head of prevention and rehabilitation and chair of the Canadian Women’s Heart Health Centre.

The room heard how it’s been 22 years since Dr. Mesana left his homeland of France to come to Ottawa, after being convinced by the late Dr. Wilbert Keon, founder of the Heart Institute, that it would be a smart move for his career and his family. “Twenty two years later, I think it was the right decision,” Dr. Mesana, who’s recognized as one of the leading heart valve surgeons in the world, said with a smile.

He spoke of how proud he is to have his name associated with the “super chair” to improve care for patients with heart valve disease through life-saving research. “There’s nothing more important than research, for the future of you, your children and your grandchildren,” Dr. Mesana told the room. “The research of today is the treatment of tomorrow, and tomorrow you guys get the benefit of the treatment from the research of yesterday.” 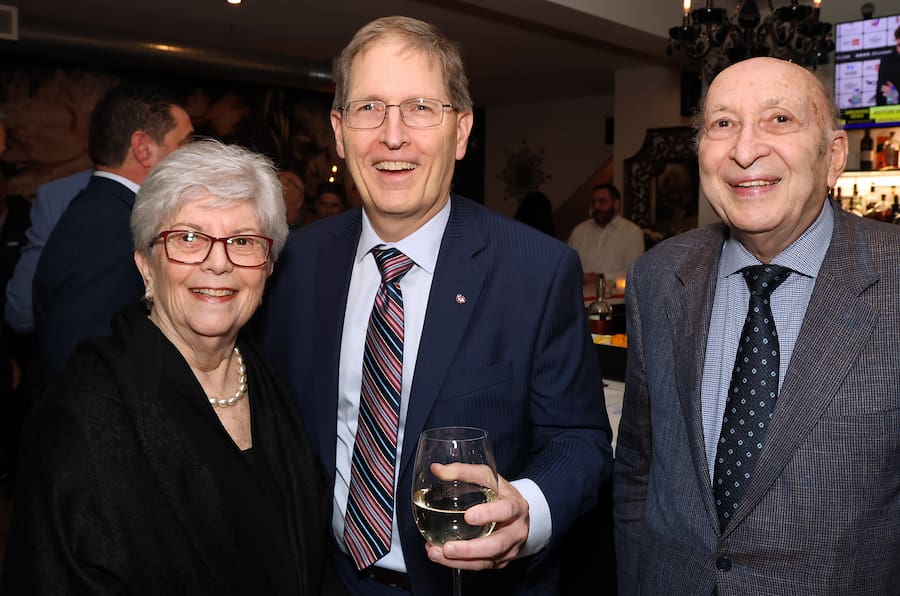