Making it to half a century does deserve more than just cake and ice cream. Algonquin College called on some 300 alumni and business partners to help it celebrate its milestone birthday while also raising funds for DARE District, its new innovation, entrepreneurship and learning centre.

Its student commons building was bathed in its signature green school colour and filled with the sensational sounds of live music. Guests visited multiple food stations and checked out memorabilia during Thursday’s Walk Through the Ages-themed gala.

While Justin Lavigne, a graduate of the Music Industry Arts program, gave a beautiful performance on the Steinway grand piano — a legacy gift from CBC — it was the powerful voice of Jamie Fine, accompanied by fellow Algonquin College alumnus and musician Elijah Woods, that rocked the house that night. The duo recently won the inaugural season of CTV’s reality music competition series, The Launch.

Hiring a photographer to capture your event’s most notable moments shouldn’t be an afterthought. You need an expert like Sarah Bradley of iShootEvents.

Smith recalled how, at the recent West Ottawa Business Excellence Awards, the college was recognized with the prestigious Chair’s Award. Algonquin College Foundation acting director Peggy Austen had inquired, during her acceptance speech on behalf of the college, how many people in the 400-plus crowd were alumni, taught at the school, or had hired a graduate.

“No less than two thirds of the room put their hands up,” said Smith. “This is what builds great communities.”

From the culinary community were such well-established alumni chefs as Michael Moffatt, now with Thyme & Again, and Katie Brown Ardington. She recently left her position as personal chef to the prime minister to re-join the Beckta group, assuming Moffatt’s old position as executive chef of the Beckta, Play Food + Wine, and Gezellig restaurants.

Alumna Christina Tessier hadn’t been satisfied with her career in high-tech and government when she made the decision to go back to school. She noticed that Algonquin College was offering a program in museum studies. It had never previously dawned on her that museums — which she loved — could be a career choice. She enrolled in the program that same year.

“And, the rest is history,” said Tessier, who’s now director general of the Canada Science and Technology Museum. She’s also on the board of directors for the Algonquin College Foundation.

Award-winning Ottawa-based photographer Michelle Valberg told OBJ.social how she’ll always be grateful to the school for its guidance and support. She’s also one of the more than 175,000 people to have graduated from Algonquin College.

“Without them I don’t think I would be a photographer,” she said. “They were just so instrumental in me getting my career off the ground, with pushing me along and giving me encouragement, and being there to say, ‘You have talent. Do something with it’.”

Jacqueline Belsito had been stuck at a crossroads at the end of high school, not knowing which level of post-secondary education to pursue. She enrolled in business administration at Algonquin, with a major in marketing and advertising. She immediately excelled and found her potential. “I flourished as an individual,” said Belsito, who’s now vice president of philanthropy and community engagement with the CHEO Foundation. “I also made friends that I went to school with that I’m still friends with today.”

Radio personalities Jeff Mauler and Scott Rush, as well as Angie Poirier and ‘Stuntman’ Stu Schwartz, helped to emcee the evening. Gord Brown from TSN 1200 auctioned several items, including a trip to the Grand Isle Resort & Spa in Bahamas. It was bought for $4,500 by restaurateur Nick Bouris of Chances R, located just down the road in College Square. 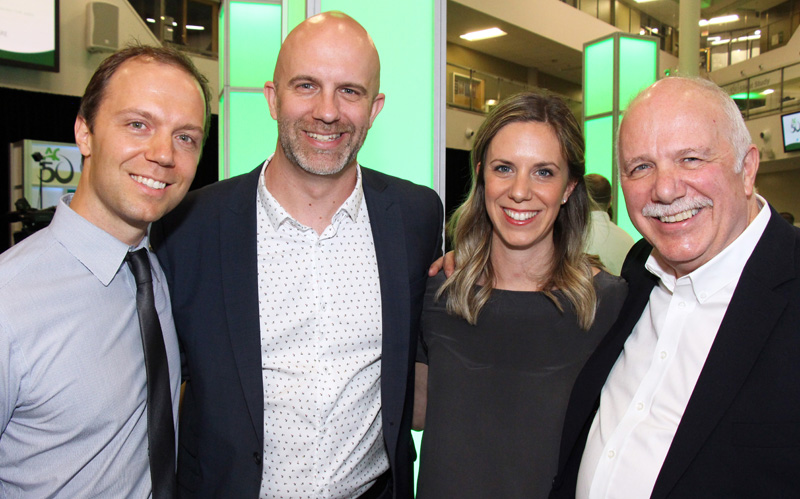 The school is lucky to count Pierre Santoni among its former grads. He’s now director of strategic partnerships and alliances for VIA Rail, which was generous in its support of the evening.

A VIA Rail trip for four this summer to see a Blue Jays versus Yankees game in Toronto, with hotel, sold for $1,800 to former NHL player Jim Kyte, who’s now dean of Algonquin College’s School of Hospitality and Tourism. A VIA Rail return trip to Halifax for four, in a sleeper car, sold at $4,000 twice — to the two highest bidders: Wayne French, director of public affairs for Waste Management, and Jeff Darwin, executive director of Ottawa Markets.