It’s been a tough year, professionally, for Canadian singer-songwriter Kathleen Edwards. Not only did COVID-19 force her to suspend touring and live performances but it also led to the temporary closure of her beloved Quitters coffeehouse in Stittsville.

What’s helped the talented and popular musician keep things in perspective is the work she’s now doing with the Shepherds of Good Hope, a nonprofit organization that provides services and programs to hungry and homeless men and women. She’s supporting the Shepherds with her special live-stream musical performance of a John Lennon song taking place this Thursday, May 6, at 12:30 p.m. It’s the first of a two-part Sing for Hope musical engagement fundraiser.

Coincidentally, when David Gourlay, director of philanthropy at the Shepherds of Good Hope, first reached out to Edwards to see if she’d get involved, the artist was more than ready to sing the organization’s praises.

The Chelsea, Que. resident had been noticing during her eye-opening commute to and from Quitters all the down-on-their-luck clients of the Shepherds hanging outside its shelter, at King Edward Avenue and Murray Street. Such vulnerable populations were particularly visible when downtown sidewalks and streets were otherwise deserted, because most residents were remaining in their homes to prevent the spread of COVID.

“The only people who were outside and in public spaces, generally, were people who were marginalized and homeless,” said Edwards. “I just can’t even imagine what it would be like to go through the pandemic without a safe place to sleep every night.”

Edwards was one of the first musicians Gourlay contacted after coming up with his creative Sing for Hope concept, an experienced-based fundraiser that aims to inspire the community through music. Not only did the artist immediately agree to participate but she proceeded to pitch to Gourlay her idea of performing a simple little love song written by Lennon that she found to be beautiful and profoundly moving. It’s called Love. Gourlay responded with an enthusiastic yes before she was even done speaking.

“It was an easy conversation; she understood what we were trying to do,” said Gourlay, who was impressed by the singer’s sensitivity toward the cause. “I think the community – when they watch the video on Thursday – is going to be totally inspired by Kathleen’s warmth.”

“This is about a message and a narrative that speaks to compassion, empathy and hope,” said Gourlay. “That’s really what this is about, and an opportunity for us to connect with the community to raise money for our programs and services.”

On a personal level, Edwards is in a good place right now. She got married last year to developer Sean McAdam (they were introduced by freelance writer Hattie Klotz at a fundraiser Klotz hosted at her family’s Farrellton, Que. farm). Still, she remembers how difficult life was 10 years ago when she slipped into depression and temporarily quit the music business.

“I had to work very, very hard to get well again,” she explained. “I had all of the privileges of an income, a supportive and loving family, a good apartment, access to health care, and it was still very difficult. It was the hardest thing I’ve ever been through in my life.

“I can’t imagine trying to do that with any of those pieces not in play, let alone all of them.

“That really rings true to me, because I don’t know how I would have survived my depression had those pieces not been there.”

Edwards acknowledged the impact of COVID-19 on both her musical career and small business has been “hugely disappointing.”

“I went from feeling like I had a really vital role to play in my community to basically being told I’m not essential,” said Edwards, who released her fifth studio album, Total Freedom, last August.

“But, doing this project has been a really great reminder of what homeless populations are dealing with — true poverty, marginalization, mental illness and addictions. The things that they have to confront on an hourly basis, every day, has really put my shit into context.”

Edwards has been told there will be shows for her to play this fall in the United States. If the lockdown ends later this month, as planned, she will be able to reopen Quitters, which has become a special place to connect for locals.

“It really has allowed me to build a community that I feel so incredibly part of, which was really absent in my music life, because you’re on tour all the time.” 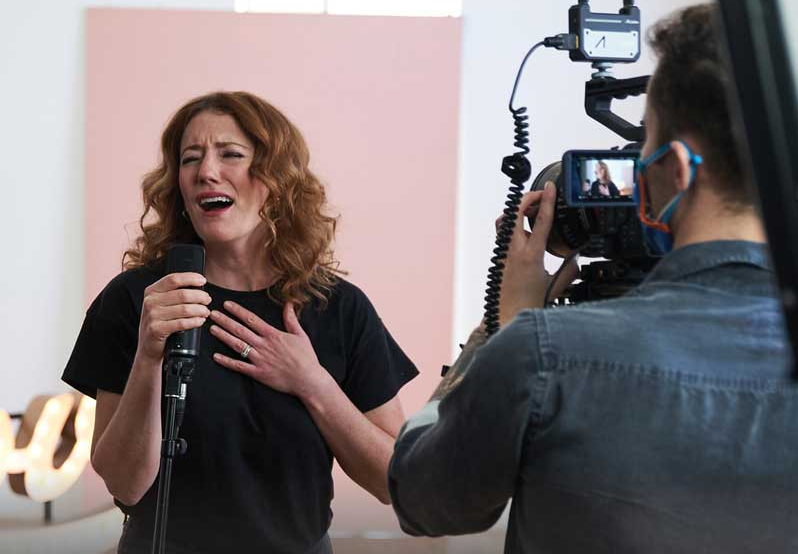 “This is a way for us to continue supporting local musicians and making sure we get their names out in the community,” said Gourlay, who was initially inspired by an American grassroots movement, called Playing for Change, that connects people through music.

“We want to lift up the spirit of this community right now. With the pandemic, we haven’t had a lot of opportunities to get out there and enjoy anything. We’re hoping to bring that into people’s homes.”

The public can support Sing for Hope by making a donation and/or buying a $25 ticket and a party box. The money raised from one ticket feeds 10 clients through the Shepherds’ soup kitchen, said Gourlay.