Sometimes you really do need a stiff drink, especially after skating the entire 7.8-kilometre distance of the Rideau Canal on a really cold day against a strong headwind.

So, go ahead and have one. Dunrobin Distilleries has made history as the first craft distillery to serve its locally made spirits on the world’s largest skating rink. It’s come up with its own signature winter cocktail, called the Northern Spike, made from hot maple sap with a shot of Dunrobin’s award-winning whisky, served in 12-ounce biodegradable cups.

And you thought hot chocolate was a good pairing with BeaverTails.

Word is slowly getting out about the new Dunrobin Cocktail kiosk, which is set up at the north end of the canal at the Concord rest area between Pretoria Bridge and the National Arts Centre.

“The feedback has been very positive,” Dunrobin Distilleries co-owner Mark Watson said. “Sales have been good. They’ve been very good, I would say.”

The Rideau Canal Skateway is managed and maintained by the National Capital Commission, a Crown corporation. It’s temporarily closed due to the mild weather.

The Dunrobin-based business says it approached the NCC in 2019 with its idea to offer a uniquely Canadian alcoholic beverage that could warm skaters up, similar to a hot toddy.

The pitch went over well, thanks to the Canadian focus, said Watson.

The business was selected through a request for proposals process that Watson described as long and extensive.

“You had to jump through a thousand rings of fire to get accepted,” he said of all the requirements, including proof of bilingualism, environmental considerations and health and safety protocols.

Dunrobin Distilleries has a fenced-off licensed area in which customers can enjoy their drinks. There are places to sit that are kept properly lit after the sun goes down. Beverages are served from an Airstream Caravan mobile bar by employees with Smart Serve certification.

The location is meant to be a place for skaters to enjoy a nice drink – and not a boozy watering hole.

“In a perfect world, people would be skating with their cups,” said Watson, who’s just happy the NCC gave the distillery permission to sell its spirits on the canal this winter. “It’s the first time in history they’ve allowed alcohol to be served. It shows them as being very progressive.

“Everybody that stops by is very excited by the concept.”

Along with the $9 Northern Spike cocktail, skaters can order $5 shots of the distillery’s assortment of spirits, which include its whisky, gin, vodka and limoncello. It also serves a non-alcohol green tea with maple sap drink that’s full of antioxidants.

Sales have been “on track” with expectations, said Watson, who hopes to expand the distillery’s presence on the canal next year, provided Winterlude activities are back on. The multi-day winter celebration is one of Ottawa’s most important tourist draws, attracting an average of 600,000 visitors each year. 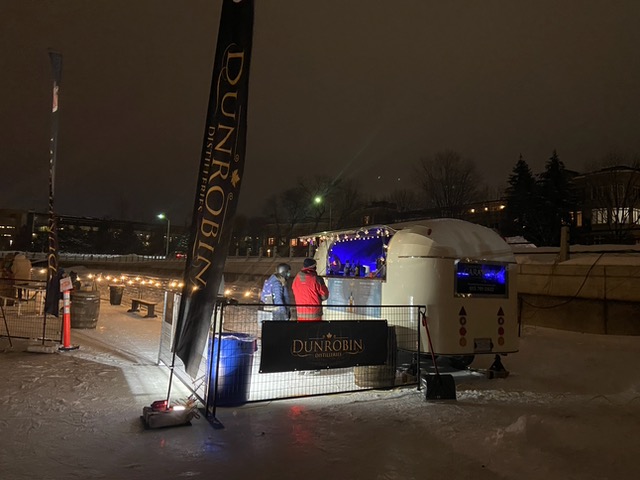 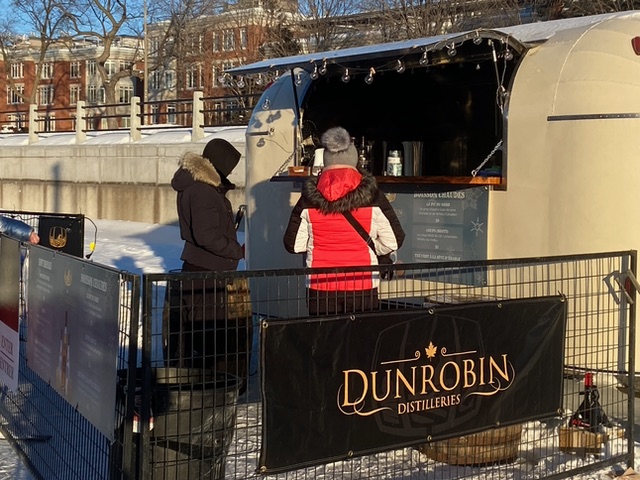 Dunrobin Distilleries was co-founded by Watson and his business partner and longtime friend Adrian Spitzer about four years ago on Watson’s small organic farm in the rural west-end community of Dunrobin. It grows and harvests many of its own organic ingredients that Watson and Spitzer combine with their passion for the art of distilling.

“I’ve been distilling since I was in high school, and so has my partner,” said Watson.

The business has a team of 20 full- and part-time employees. Its leadership includes former Royal Oak Pub Group CEO Jonathan Hatchell as vice-president.

“We’re growing, and we’re trying to become one of Canada’s premier producers of spirits,” Watson said.

January’s cold weather meant the skateway was open for 27 consecutive days in 2022, almost as many as last year’s season total of 29 days.

This past week hasn’t been great for business, though. The kiosk was shut down earlier due to the downtown “Freedom Convoy” protests, followed by a warm spell that has temporarily closed the skateway. Temperatures are expected to start dropping again on Saturday.

Weather permitting, the Dunrobin Cocktail kiosk operates 11 a.m. to 5 p.m. on Sunday as well as Monday through Wednesday, and from 11 a.m. to 8 p.m. on Thursday, Friday and Saturday.

Watson has gone skating a bunch of times this season, using blades that he attaches to his cross-country ski boots.

“It’s been wonderful,” he said of the exercise and fresh air. “Now, after I do that 11-kilometre workout, I reward myself with [insert Robbie Burns accent here] a wee dram of Dunrobin whisky.”