​​If Lily Bond was to tell you what she wants, what she really, really wants, it would be to turn Spyce Girlz into a household name.

Not the all-female British pop group from the ‘90s; it’s famous enough. Her dream is to have homes far and wide using her carefully crafted line of seasoning blends. “I want everybody to have Spyce Girlz in their kitchen,” the 18-year-old Ottawa entrepreneur said in a recent interview.

“My goal right now is to be in all the grocery stores across Ontario, across Canada,” said Bond, who’d ideally love her products to land on the shelves of fast-growing Farm Boy.

Bond grew up as an only child in a single-parent household, raised by her mom, Audrey Bond. She started her business when she was just 13 years old as a way of creating her own source of income. She needed money, for example, to buy a proper laptop for her first year of high school.

As International Women’s Day prepares to celebrate the social, economic, cultural and political achievements of women around the globe, the Bonds have distinguished themselves as gals with gumption.

The mother-daughter motto has always been: Got a problem, get a plan. Said Audrey: “When there are obstacles or challenges in life, instead of saying, ‘Awww, this is hard’, make a plan and figure out what you want to do.”

The pair’s long list of DIY projects include growing their own vegetables (both outdoors and hydroponically), making their own soap, and preparing foods such as sausages, maple syrup, vanilla extract, and kombucha from scratch. Audrey also does many of her own household renovations and repairs, leading to one unfortunate mishap in 2019. She fell off a 12-foot ladder and broke her foot while removing tree branches with a chainsaw. She won’t be doing that again anytime soon.

It was their epic Tuesday Taco nights that inspired the daughter to create and sell her own seasoning blend for the traditional Mexican dish back in 2017. “We love food, we love to cook,” said Bond. 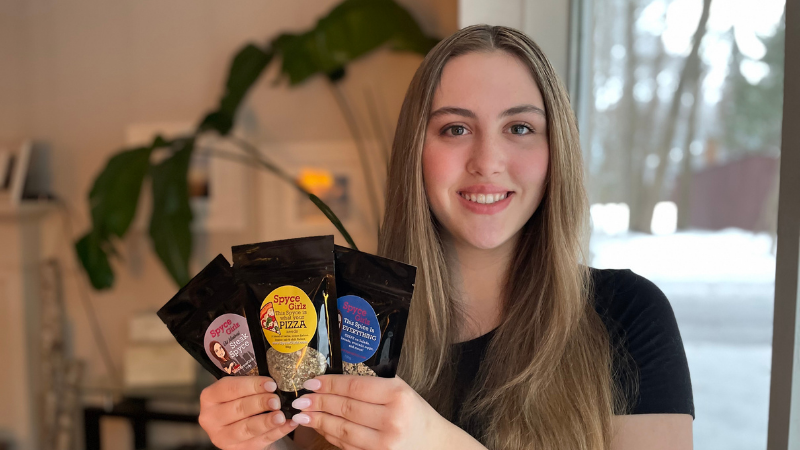 The young teen spent months in the kitchen perfecting her recipe, using all-natural ingredients. “We had to eat ground beef for, like, a whole month,” she deadpanned.

She peddled her seasonings by setting up at local farmers’ markets, where she gained what she described as a cult-like following of customers.

Audrey was her daughter’s unofficial angel investor, loaning her $150 to get started. The mom was fully and quickly repaid.

“There was a lot of trial and error,” the graduate of Lisgar Collegiate Institute acknowledged.

Bond’s annual sales have climbed over the years, grossing in the tens of thousands of dollars. Her highest profits were during the 2020 Christmas season, when she first launched her online store, via Shopify. She sold 700 units. Her seasonings are also carried at Massine’s Your Independent Grocer at the corner of Bank and Somerset streets.

Bond acknowledged that it was challenging this past fall to see friends head off to university while she chose to wait an extra year to focus on expanding Spyce Girlz. She got accepted into the prestigious Smith School of Business at Queen’s University, with an entrance scholarship. The gap year has allowed her to continue saving for the  $35,000-plus costs of tuition, residence and meal plan, and textbooks, however.

Bond has also made good use of her time by completing Invest Ottawa’s Starter Company Plus, becoming the youngest participant ever, as far as she knows. The intensive workshops trained her on a number of topics, including marketing, branding and networking, before culminating with her successful business pitch for the top prize of $5,000 in grant money.

It takes a special kind of person to be a hustler, said Bond. “Everybody has a million-dollar idea at least once in their life, but what separates the entrepreneurs is they’re the people who actually jump in and take that step.”

Bond is currently waiting to hear if she’ll pitch to investment experts later this spring on CBC’s popular Dragons’ Den. “I have a really good feeling about it,” she said of her audition for the reality TV show.

The budding entrepreneur said she has no regrets over delaying her first year of university. She expects to start this fall, with plans to keep running Spyce Girlz on the side.

“I think a lot of the experience I was getting this year from running my own business was much more valuable than a lot of the stuff I would learn at school,” said Bond. “Of course, school is important but this kind of hands-on, real-world experience of running a business; you can’t really teach that in university.”

Bond’s biggest inspiration has been her mom, the founder and CEO of Vaultt. Audrey launched her information management platform in 2018 to help patients, families and caregivers store, organize and share important information easily and securely. “It’s a beautiful thing to be able to make your own money,” said Audrey of being an entrepreneur.

The mother is “so proud” of her daughter for taking a year off school to further develop her business. “It’s really hard to take a different path from what everyone else is doing, especially as a teenager, and to not follow and do what’s expected,” Audrey said. “I think this experience is going to serve her really well. I’ve seen her grow significantly since she finished high school, as she’s taken this business on as her baby.”

“I have always told Lily that if you follow your passion, the sky’s the limit.”