Ottawa-based CannaRoyalty to raise $15M as it widens pot portfolio

Lingering uncertainty surrounding the legality of cannabis in the U.S. isn’t slowing down Ottawa’s CannaRoyalty, as the firm announced plans this week to raise $15 million to take advantage of California’s booming cannabis market.

The firm acts as an investment vehicle for investors seeking legal exposure to North American cannabis markets. Canaccord Genuity is lead underwriter for the $15-million round, which includes an overallotment option for an additional $2.75 million and is expected to close April 4.

Part of the fundraising will go towards launching cannabis products under the firm’s CR brand, primarily in the Californian market. But CEO Marc Lustig says the majority of the financing will go towards making acquisitions as CannaRoyalty continues to make strategic investments in legal cannabis markets.

“We’ve been extremely acquisitive and we’re going to continue to acquire,” he tells OBJ.

CannaRoyalty operates in a unique market position. Cannabis remains federally illegal in the United States, making it illegal for citizens to invest in pot companies. In Canada, holding pot investments is legal, though institutional investors such as banks have been slow to get involved in the industry.

CannaRoyalty (CSE:CRZ), as a publicly traded Ottawa firm, is able to act as an indirect avenue for investors who want to get involved in the much-hyped industry, both north and south of the border.

Lustig says the firm is seeing great returns on its strategy so far, especially south of the border. He points to two key California acquisitions, Alta Supply and Kaya Management, which manufacture and distribute vaporizers and other cannabis products, as the type of companies he expects to acquire more of in the coming year. 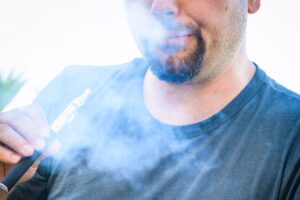 Though legalization of recreational cannabis is expected to come to Canada at some point this summer, Lustig is far more interested in the California market, where the substance was made legal this past January.

“We look at California being multiples, many multiples, probably five to 10 multiples bigger than the Canadian market,” he says.

In fact, Lustig believes California’s legal cannabis market could be nearly 20 times bigger than Canada’s, a figure he extrapolates from revenues in the medical field.

Investors were excited about California’s recreational market as well. CannaRoyalty’s stock soared at the start of the year when legal pot came into effect in the state, reaching highs of $5.65 on the Canadian Securities Exchange.

But the high times wouldn’t last. Just three days later, the stock would return to 2017 levels after U.S. Attorney General Jeff Sessions sent the American cannabis market into a state of confusion with a memo that appeared to give federal prosecutors guidance to go after the substance in states where it had been legalized. The drug’s legal status hasn’t changed in any U.S. state.

Lustig admits that cannabis is a “high-risk, high-reward” sector, but he’s not discouraged by the political climate. With a billion-dollar industry on the horizon and public support at all-time highs, not to mention the job creation and tax revenue benefits, he believes there’s little chance cannabis’s momentum is reversed.

“You have to put the political theatre alongside the reality, which is public support,” he says.

“It’s just one of these situations where we think the train has left the station.”

Though there have been delays on the track, Canada’s recreational train appears to be ready to depart this summer. CannaRoyalty has not ignored the national market either, striking deals this week with Ottawa’s National Access Cannabis and Toronto vape producer 180 Smoke to deliver products through their Canadian channels. CannaRoyalty also has agreements with licensed producers to provide its branding, packaging, formulation and manufacturing processes to products.

CannaRoyalty’s share price was down eight per cent, or 35 cents, to $4 on the Canadian Securities Exchange in late afternoon trading Friday.