Public has until Jan. 3 to vote in public or online for their favourite tree and make a donation to hospital

Forget first day jitters, it was all about first day jingles for Geneviève Dumas as the new general manager of the Fairmont Château Laurier welcomed guests to the launch of the hotel’s 24th annual Trees of Hope holiday fundraiser for CHEO.

Two hundred participants gathered in the ballroom of the hotel on Monday to decorate the 33 sold-out Christmas trees sponsored by local businesses and organizations in support of the Children’s Hospital of Eastern Ontario. By the time the volunteers were done hanging ornaments, all the coniferous creations were twinkling with holiday cheer.

The artificial trees, provided by Canadian Tire, will remain on display in the hotel’s main spaces throughout the holiday season. The public is invited to cast their vote for People’s Choice Award, either in person or online, and make a donation to CHEO.

There’s also an online auction that runs until Dec. 13 that features more than 150 items.

Dumas is now managing the Château Laurier after running the Fairmont’s nearby Le Château Montebello for the past 10 years. The veteran of the hotel industry told the room how “delighted” she was to be the new GM.

Over the years, the event has cumulatively raised more than $1 million for the Children’s Hospital of Eastern Ontario.

“That’s a staggering total that tonight you’re going to add to,” retiring CHEO Foundation president and CEO Kevin Keohane said as he thanked sponsors for their loyal support of the kids and families assisted by CHEO.

Keohane also told OBJ.social how grateful the CHEO Foundation is to the hotel for continuing to host Trees of Hope, even as its sector recovers from the COVID-19 pandemic. The crowd was kept to about half the size that it was in 2019, the last time the event was held in person, and everyone was asked to wear their masks and practise social distancing.

“We’re so thankful that we’ve got a player in the hard-hit hotel industry still bringing us together and helping to create a sense of community during such a challenging time,” said Keohane.

Media and events consultant Jenna Fyfe, who came on board to manage Trees of Hope this year, said they’re hoping to raise about $100,000. Event founder Deneen Perrin is still involved as a volunteer and was helping out Monday with her son, Alex Michel, 17, who’s been a patient at CHEO over the years. 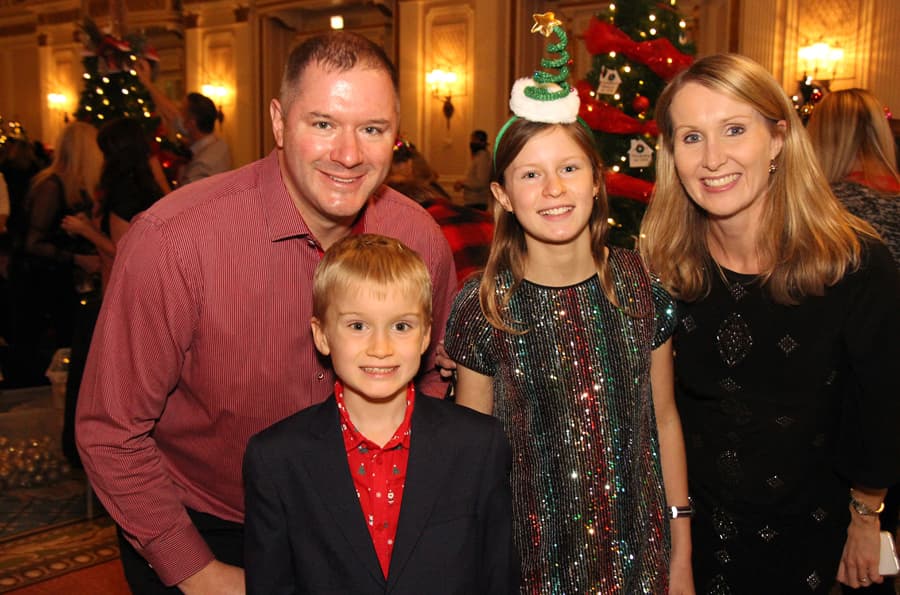 Returning as the angel sponsor was Terlin Construction and its 20-foot towering Christmas tree on display in the front lobby. The artificial tree, which looks identical to a white spruce, has turned into a hotel holiday attraction.

“That tree must be the most photographed tree in the country,” said Terlin Construction president Terry McLaughlin.

The funny thing is, McLaughlin isn’t even the Christmas type. He does, however, genuinely like the spirit of Trees of Hope. “It just puts me in the mood,” he told OBJ.social.

Inflector signed on as a star sponsor this year, joining Tamarack Homes. 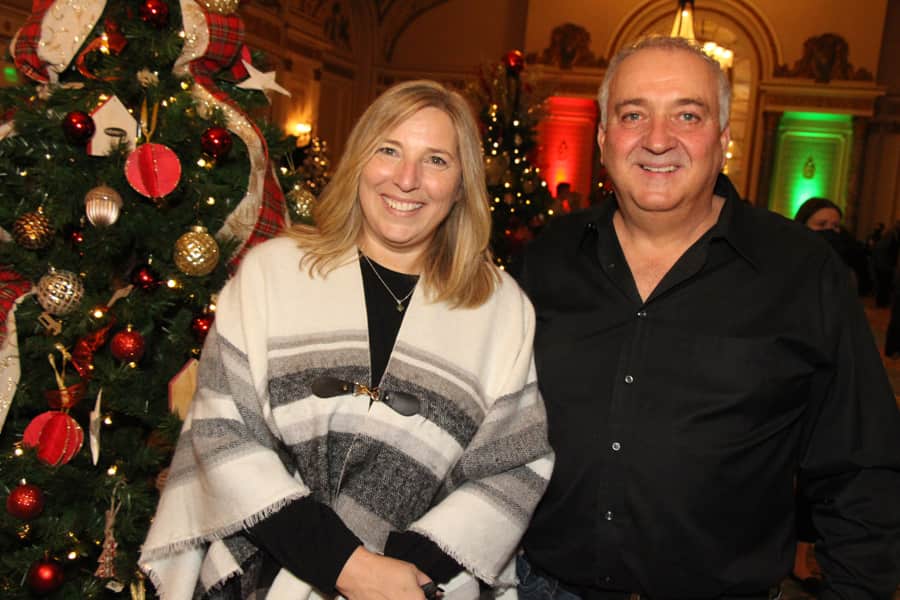 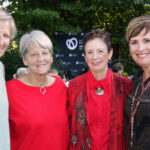 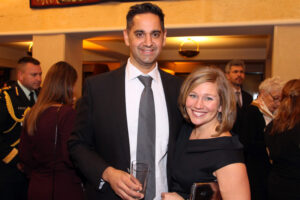 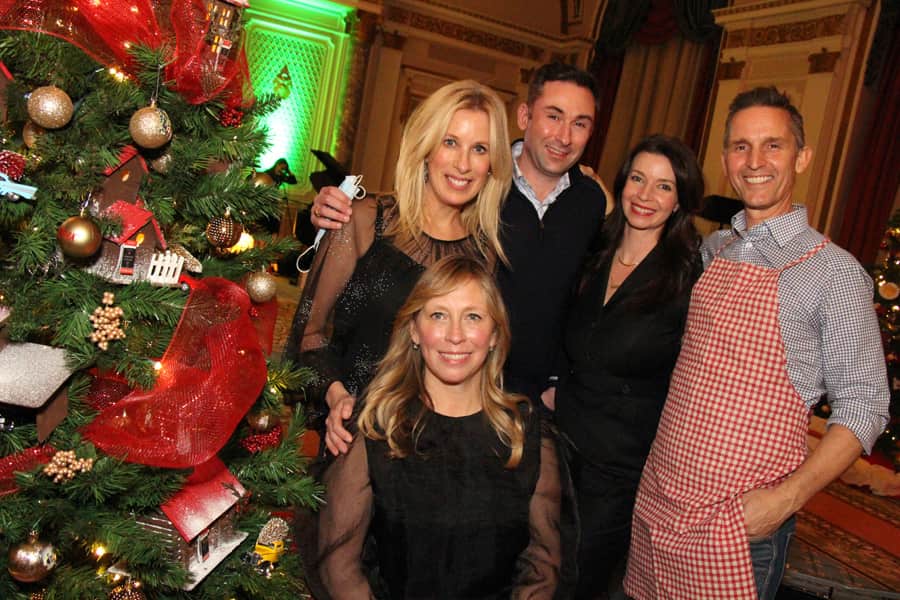 Just when you thought Sezlik.com from Royal LePage Team Realty couldn’t possibly win the tree competition again, they did. Even they can’t keep track anymore.

“I think this is our third or fourth,” said Sara Adam, a sales representative with the luxury property seller.

The team decorated its tree for the Home for the Holidays theme with miniature houses from different eras, including a log cabin, Victorian house, standard 1950s abode and urban brownstone. Each property has its own for-sale Sezlik sign. The team got their houses to cast a warm glow by drilling small holes that allow the bulbs on the tree lights to poke through. The overarching theme of the tree was family and togetherness.

Adam said the team looks forward to participating in Trees of Hope each year. “We love it,” she added. “It’s a great team-building thing.” 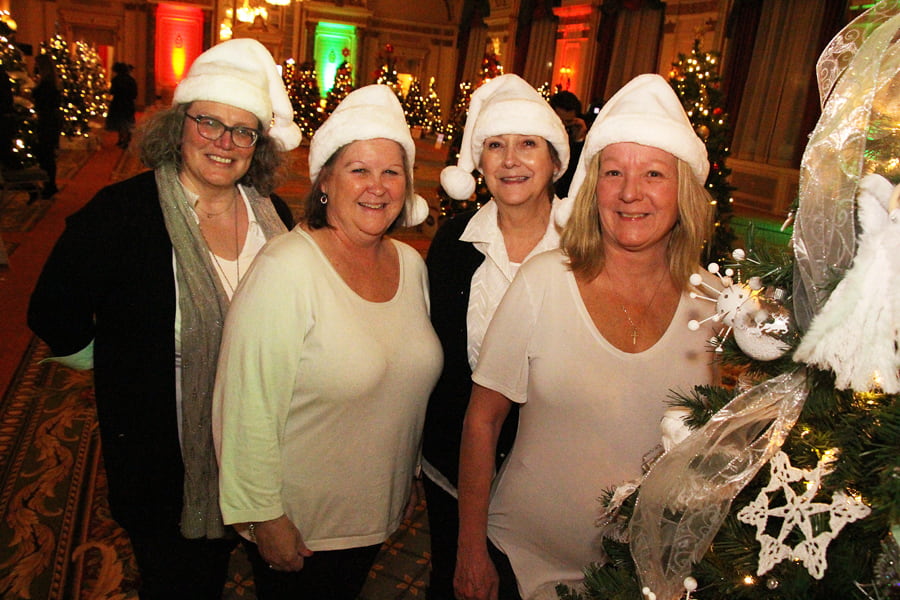 KPMG, which has also won in the past, came in first place in the Let it Snow category. Its team members spent weeks working on their homemade decorations, using their dining room tables as arts and crafts stations. It created ornaments that captured many of the popular outdoor activities that Ottawa residents embrace each winter. They even managed to make spiky COVID virus particles look attractive hanging from the tree.

Some organizations, such as BDO Canada, were newer to the event and still getting a feel for what’s expected.

“We’re scoping out the competition and already taking notes for next year,” said André Bolduc, a partner and senior vice-president at BDO Canada, before adding, with a whiff of sarcasm: “We’re not competitive.”

It’s quite possible BMO’s tree was upstaged by team member Melanie Grefford, who donned a formal gown to help decorate. After she was done at Trees of Hope, the branch manager headed straight to the Shaw Centre for another fundraiser, also in support of CHEO. The gala was organized by the Telfer School of Management’s student-run charity organization CASCO.