Mitel is shifting its management ranks with a new president and CEO, ending Rich McBee’s eight-year tenure as head of the Kanata-based firm.

Mary McDowell will take the reins of the cloud communications company, Mitel announced Monday. McDowell joins the company after more than a decade and a half in the telecom industry, holding various executive roles at companies such as Nokia. She most recently served as CEO of Polycom, a one-time target of Mitel’s M&A engine.

McDowell will take on the president and CEO roles less than a year after Mitel was acquired by California-based Searchlight Capital in a US$2-billion deal that saw the company return to private operations.

The current scenario echoes McDowell’s work at Polycom, where she stepped in to lead the San Jose-based firm in 2016 after a private equity firm outbid Mitel’s own acquisition play. She led Polycom through that transition before the firm was ultimately sold off to headset-maker Plantronics.

Mitel’s acquisition by Searchlight came as the firm struggled to meet quarterly performance metrics as a publicly traded company. The past few years have seen Mitel push to transition its existing on-premise communications customers to a software-as-a-service model with cloud-based systems.

Mitel’s own board expressed concerns over the slow rate of cloud conversions in financial filings last year that argued in favour of taking the Searchlight deal.

With the private equity firm’s partners now on board, Mitel will turn to McDowell to continue its transition.

“Mary’s proven operating experience and success in guiding technology companies through market transitions make her an ideal choice to guide Mitel in this next chapter,” said Andrew Frey, a partner at Searchlight Capital and a member of Mitel’s board, in a statement.

“Mitel has a storied history of innovation, a trusted brand and a unique ability to meet customers wherever they are on their path to the cloud,” said McDowell in a statement.

“I’m excited about the opportunities that lie ahead and eager to work closely with Mitel’s experienced team and network of partners to continue delivering solutions that make communications and collaboration more seamless for our customers.”

McDowell, through a Mitel spokesperson, did not return requests for comment on Monday. 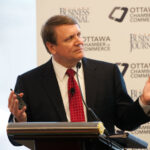 McDowell succeeds McBee, who took on the CEO role in 2011 and guided the company through a series of high-profile M&A plays.

Mitel did not say where McBee will go next but did say he accepted a “new executive role” outside of the company. In a statement, McBee said he was proud of the work he and his team accomplished during his tenure and gave his seal of approval to the new chief.

“Mitel is well-positioned to accelerate the market transition to cloud and Mary has the deep technology expertise needed to lead the company. The future is bright for Mitel and I look forward to watching its continued success,” he said.

Frey thanked McBee for his work in a statement, noting he played a “crucial role in transforming Mitel.”

McDowell might look to rekindle Mitel’s M&A momentum if recent reports are to be believed. Reports first surfaced back in April of a proposed merger between Mitel and Avaya, an idea analysts gave their initial thumbs-up to in calls with OBJ earlier this year. Bloomberg reported in August that merger talks were ongoing, though neither company has confirmed the existence of any M&A talks between the firms.

McBee’s departure caps off a year of executive turnover for the Kanata-based company.

When the Searchlight acquisition officially closed last November, it meant the end of Mitel co-founder and Wesley Clover chairman Terry Matthews’s run on the company’s board of directors. Steve Spooner, Ottawa’s inaugural CFO of the year, retired a few months later and was replaced by Vanessa Kanu. Last month, Mitel bid farewell to Amy MacLeod, the firm’s vice-president of strategic communications and corporate diversity officer, who left for a new role with Seaspan Shipyards.