The Kanata North Business Association is touting a multimillion-dollar pilot project that would see autonomous buses run along March Road and Highway 417 as well as an AV shuttle service that could be ferrying workers around the area’s tech park as soon as next year.

In a presentation to the city’s transportation committee on Monday morning, the KNBA said it’s looking for public- and private-sector funding partners for the project, which is expected to carry a price tag of nearly $35 million.

Under the proposal, electric autonomous buses would travel the 9.8-kilometre “Blue Line” starting from the new Moodie LRT station that’s slated to open in 2025 and be the new western terminus of the expanded east-west Confederation Line. Buses would run along Highway 417 on existing shoulder lanes before turning north on to March Road to Innovation Drive.

Meanwhile, smaller self-driving shuttles dubbed “robo-taxis” would use the 10.5-kilometre “Green Line.” The vehicle would carry groups of 10-15 passengers north on Moodie Drive from the LRT station, travelling along Carling Avenue to Leggett Drive before looping into the Kanata North tech park.

The pilot project would be the first in Canada to use full-sized autonomous buses on a rapid-transit route.

The systems would be run by private-sector operators. Assuming that funding is in place, the KNBA said it hopes to launch the Green Line before the end of next year and have it ready for “full-scale operations” by the time the Moodie LRT station opens in 2025. 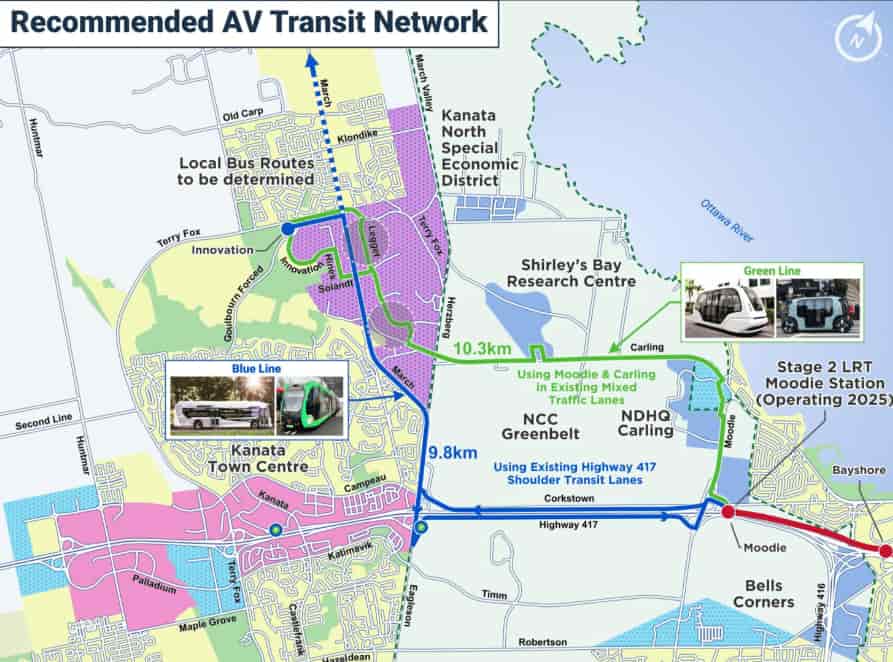 The Blue Line would be a longer-term proposition, with a pilot not likely to get off the ground for at least four years.
Kanata North Coun. Jenna Sudds said the project would “demonstrate what is possible” in the field of AV technology while offering greener transit alternatives.

“I think it positions our city well to be ready and able to roll this out as soon as the technology is ready,” she said. “What we learn through these pilots will benefit the entire city.”

The connections to the employment hub could also help plug a perceived gap in the city’s long-term rapid transit plan.

When the Confederation Line is expanded further westward as part of stage three of the city’s light-rail vision – a project not expected to break ground until the 2030s – the rail line will bypass the Kanata Tech Park and instead follow a route along Highway 417 before heading south at the Canadian Tire Centre and towards Stittsville.

According to a feasibility study from consulting firms Parsons and Stantec, it would cost at least $24 million to get the Blue Line up and running, including about $6.7 million for infrastructure upgrades, $15 million for the vehicles and $2.5 million in additional expenses.

Those costs would be bundled with $1.1 billion earmarked for the extension of the Confederation LRT line to Terry Fox station and the addition of new routes to the March Road bus rapid transit system.

The Green Line’s tab is estimated at $9.25 million, including $6.1 million for new infrastructure, $1.6 million for shuttles and $1.55 million in contingency costs.

Invest Ottawa CEO Michael Tremblay, whose agency would play a key role in overseeing the project, said the proponents are currently pounding the pavement for funding from the federal and provincial governments as well as private-sector partners.

Tremblay said the National Capital Region has become a global hotbed for AV research and development thanks to facilities such as Area X.O, a 16-kilometre test track for autonomous vehicles on Woodroffe Avenue, and a growing number of local startups catering to the industry.

“This is just another way for us to showcase some of the incredible capabilities our region has.”

The project would cement the city’s status as a world leader in AV and provide new opportunities for Ottawa-based tech firms to show their mettle, he added.

“These are companies that have already blazed a trail in global markets,” Tremblay said, referring to local firms such as SmartCone and SMATS Traffic Solutions that specialize in AV tech. “It puts a spotlight on what our region is really well-known for. This is just another way for us to showcase some of the incredible capabilities our region has.”

KNBA executive director Jamie Petten said the organization, which represents more than 500 businesses, wants to reimagine the tech park as a “special economic district” that eventually includes space for housing students and workers.

Improved public transportation is a key component of that vision, she explained.

“When we’re speaking to talent across this city and around the world, they’re seeking a place to live, work, play and learn,” Petten said. “It further enables our businesses to attract that talent faster and more efficiently.”

The proposal would mark the most ambitious real-world demonstration of AV technology yet in the capital.

In 2017, the Kanata North business park hosted Canada’s first test of a driverless car on public roads when a grey Lincoln powered by BlackBerry QNX technology took a spin down a stretch of Legget Drive between Herzberg and Farrar roads.

Last November, a 10-day pilot project in Ottawa featured a six-passenger electric vehicle built by European firm EasyMile. The shuttle travelled a four-stop, 1.5-kilometre loop around the Tunney’s Pasture campus at speeds of up to 15 kilometres per hour.