When Andrew Ralph landed in Ottawa in 2015, his goal was to start a business and settle into a home for his young family.

After two years of running a franchise with his new community’s security in mind, the former U.K. resident has been honoured with the City of Ottawa’s Immigrant Entrepreneur of the Year Award for helping newcomers like himself make their own homes in the city.

Mr. Ralph, owner of Signal 88 Security’s Ottawa office, first came to the country in 2006. The Manchester native was in Alberta training troops as part of his role with the British military. It was there, in Banff, that he met his Quebec-born wife. 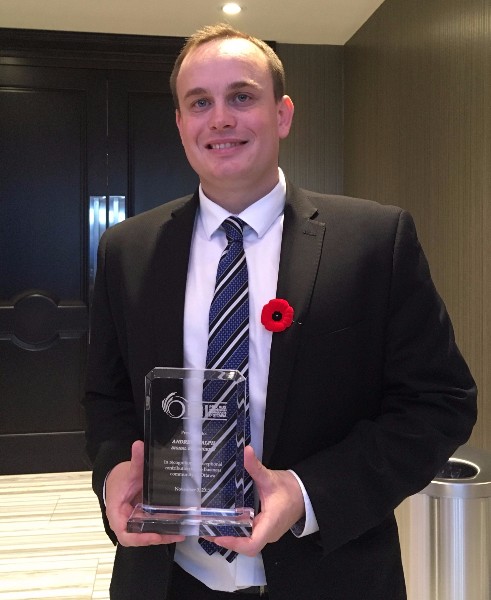 In the midst of raising their first child together, the military man would regularly return to the United Kingdom on contract work. It was the second child that brought him and the family back to Canada for good.

“I didn’t want to just come here and do nothing. So I started a business,” he says.

Signal 88 Security provides security and patrol services for businesses, residences, events and transportation. Mr. Ralph says owning a franchise of the company allowed him to satisfy the need that led him to military service in the first place: Helping others.

“I’m moving to a country, going to go into a new community where I don’t know anyone. Why not try to give back on day one?,” he says.

Providing security for people trying to run their businesses or feel safe in their residences is just one of the way Mr. Ralph gives back. The second way is through the employees he hires.

Signal 88’s Ottawa location now has 34 employees. Fifteen of those employees are newcomers to Canada, and another five are youth workers getting their starts in the industry.

Data released Monday as part of the Ottawa Business Growth Survey indicates a disconnect in employers’ attitudes towards immigrants. While 82 per cent of those surveyed said that immigrants were important sources of skilled labour for Ottawa’s economy, only 43 said they felt the same way about their own businesses.

Larger enterprises are more likely to view immigrant talent are valuable to their businesses. Sixty-five per cent of companies with more than 150 employees said immigrants were important sources for their business’ growth, compared to just 29 per cent of businesses with five or fewer employees.

Fifty-one per cent of all respondents said their company had hired an immigrant in the past year.

Being able to help newcomers get their starts is a noble cause, but Mr. Ralph adds that there are concrete benefits to his hiring decisions.

He says newcomers to Canada are often punctual and committed to putting in effort.

“They’re not shy of hard work,” Mr. Ralph says, adding that many come with hard-to-source skillsets. Those who are untrained, he says, are quick and efficient learners.

Language barriers are inevitable, as not every new hire Mr. Ralph has brought on has been fluent in English. He says that taking the time to explain instructions in multiple ways will aid in understanding and ultimately improve the quality of work.

“If they’ve got a language barrier, and you can make them understand with the right training, give them the right tools to do the job (and) most of the barriers come down.”