A Montreal developer with a growing portfolio in Ottawa is proposing a 22-storey hotel and apartment complex on the site of a historic commercial building in the ByWard Market that was once home to e-commerce powerhouse Shopify.

In a recently filed planning application, Rimap Development says it wants to build the project on an P-shaped 1.3-acre property at 126 York St. and 151 George St. A five-storey heritage warehouse building now sits on the York Street site and a surface parking lot occupies the George Street portion.

The plan would see the Major Building ​– which was built in 1913 and is now protected under the Ontario Heritage Act – preserved and converted into a hotel with 214 suites.

Perhaps best known for being Shopify’s headquarters back when the e-commerce powerhouse was still a fledgling startup, the 58,800-square-foot loft-style structure is now home to several tenants, including software company Kivuto Solutions and architecture firm Linebox Studio.

According to a heritage impact study commissioned by the developer, the former warehouse “exemplifies the Beaux Arts style as applied to an industrial building” and is “a rare example of early 20th century industrial architectural design.” 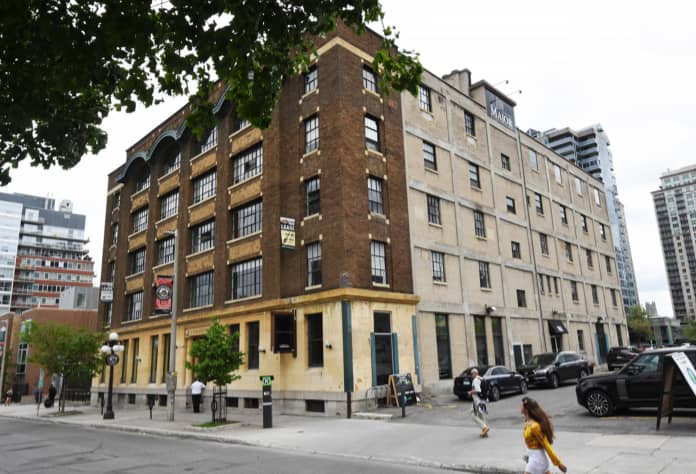 The proposed 22-storey tower designed by Montreal-based Architex Group would face George Street and contain 280 rental apartment units. The new building would be connected to the heritage structure through a series of stepped-back floors built on the warehouse roof, and a ground-floor pedestrian walkway would link the two buildings.

An underground parking lot with spaces for 122 vehicles and 168 bicycles would be shared between hotel guests and tenants of the apartment building. The development would also include a gym, pool and rooftop terraces for the use of guests and residents, while the hotel would have a restaurant and outdoor terrace facing York Street.

“The adaptive reuse of the warehouse as a hotel and restaurant at-grade will reinforce the hospitality and residential character of ByWard Market,” a development brief compiled by consultants Fotenn Planning + Design states.

The proposed tower’s height of about 70 metres exceeds current zoning limits at the site, which is situated in a mixed-use downtown zone on York Street and a residential zone on George Street. The developer is also requesting relief from current setback and angular-plane requirements.

The proposal represents another local project for Rimap, which develops and manages hotels and residential projects in Montreal and is now involved in a growing number of Ottawa real estate developments.

The company is part of a plan to build a 25-storey, 208-room AC Hotels by Marriott lodging that’s slated to open in 2023 on the site of a former Beer Store at 201 Rideau St. and will be managed by the company’s sister firm, Rimap Hospitality. The firm is also developing a 20-storey apartment building on Bronson Avenue managed by District Realty that is scheduled for occupancy this summer.

In addition, Rimap lists land at 275 Rideau St. at the corner of King Edward Avenue currently leased to the LCBO as a “future development site.”