Leave it to a former paramedic to help resuscitate the local tourism sector.

Étienne LeBlanc-Cameron, together with business partner Léon Dufour Harris, is launching a new venture this Monday that will allow the public to explore one of the coldest capitals in the world while seated comfortably inside a heated trolleybus or double decker.

The pair has created Cobblestone Tours, the only bilingual guided sightseeing tours of downtown Ottawa and Gatineau during the winter months. The young businessmen see the excursions as the perfect addition to their Lady Dive Tours, which they bought this past summer. The Lady Dive sightseeing tours run from May through October.

The winter tours will depart from and return to the company’s ByWard Market kiosk set up outside The Grand Pizzeria & Bar at 74 George St. Proof of vaccination is required to board, as is the wearing of a mask. 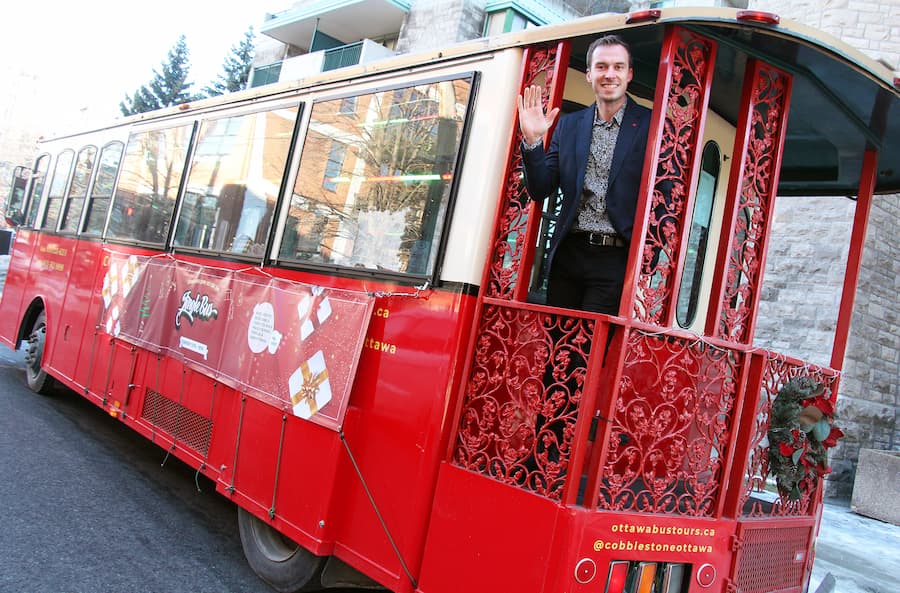 LeBlanc-Cameron knows the public is tired of the nearly two-year-old pandemic and ready to move on. Such opinions were expressed to him all summer long from his sightseeing customers. “Eventually, things are going to go back to normal.

“We’re just thinking, ‘Let’s hurry it up’,” said LeBlanc-Cameron while snapping his fingers for effect. “The way to hurry it up is to open new adventures, new things. People want to go out again.”

The pandemic has been particularly cruel to the tourism industry, which, before the pandemic, provided jobs for 1.8 billion Canadians and was worth $1.5 billion in total economy activity. The Conference Board of Canada is expecting a healthy rebound to Canadian tourism over the next few years, reaching pre-pandemic levels by 2023. However, it believes recovery will be uneven between provinces and cities. There are other reports suggesting the sector won’t fully recover until 2025.

Ottawa Tourism president and CEO Michael Crockatt told OBJ this past summer that the industry was starting to show signs of renewed life. However, Ottawa will take longer to bounce back than some other regions of the province because it relies heavily on convention and business traffic, he added.

“We’re very realistic,” said LeBlanc-Cameron of their lower-than-usual revenue expectations. For now, he and Dufour Harris are marketing their business domestically, with an out-of-town focus on visitors from Montreal and Toronto.

LeBlanc-Cameron said they consulted with local hotels and tourism operators about starting up winter bus tours. “Every single person loved the idea,” he said. “The feedback was great.”

The public has the option of taking a 70-minute ride that passes by Ottawa’s historical landmarks and popular attractions, or of buying a one-day pass that allows passengers to hop off and back on at various stops, which include Parliament Hill, Lansdowne Park, the national gallery and national museums, Rideau Hall, and Jacques Cartier Park in Gatineau for outdoor activities held during Winterlude celebrations.

As well, Cobblestone Tours is running evening trips to soak up the beauty of a capital city adorned with holiday lights.

The business partners purchased a 1986 trolleybus that was most recently owned by Campeau Bus Lines. They spruced it up with the classy colour combination of fire engine red and beige. The 32-seat vehicle offers a welcoming space that’s decked out for the holiday season with festive lights and trimmings.

The trolleybus is being used this week, until the 19th, by the Bank Street BIA to tour shoppers through the downtown district and to help promote the local stores and shops. They’re calling it the Jingle Bus.

The businessmen also have a vintage 60-seat double-decker bus. It came with their purchase of Lady Dive, a sightseeing company founded in 1999 by Diane Beauchesne, her brother Daniel and their good friend Jean Besner, all of whom reside in the Eastern Ontario town of St. Isidore. The company takes tourists around on double decker and amphibious buses, the latter of which travel on land and water.

LeBlanc-Cameron, 27, was an employee of the company for six seasons during his post-secondary years. He earned a degree in psychology from the University of Ottawa before doing his training at Collège La Cité to become a paramedic.

Dufour Harris, 25, has a finance degree from the Telfer School of Management at the University of Ottawa. He also worked for four years as an operations manager with Lady Dive Tours.

Both men are long-time friends who grew up in Ottawa. While working for Lady Dive, it became their goal to one day run the company. They just didn’t expect it to happen so soon. They learned in the fall of 2020 that the owners, who were getting on in age, were looking to sell. “This was our chance,” explained LeBlanc-Cameron of an opportunity they felt might not come their way again. “It was now or never.”

At that time, LeBlanc-Cameron had started working as a full-time paramedic with Ottawa Paramedic Services while Dufour Harris was a new investment specialist with RBC in Montreal. They see their career change as part of a larger movement, dubbed the Great Resignation, that started during the pandemic. A lot of young professionals feel like their life is on pause, said LeBlanc-Cameron. “It’s a really weird time in our lives.”

Understandably, their parents were concerned when the young men told them they were quitting their jobs to go into tourism while the sector was still suffering. LeBlanc-Cameron’s roots aren’t entrepreneurial. His father rose to the rank of superintendent with the Ottawa Police Service while his mother was a school teacher.

“We couldn’t have done this without our parents’ support and guidance,” he said. “Even though they were questioning our timing, they had faith that we would be successful.”

The young men faced several stressful and uncertain months, specifically during the time when they no longer had their jobs, weren’t bringing in an income, and were hoping that their business deal didn’t fall apart. They used this period to make improvements to Lady Dive’s website, booking system, marketing strategy and other areas.

The young men became the official owners of Lady Dive on July 26th. “It was incredible,” said LeBlanc-Cameron of that day. “This was a dream I had for so long.”

For more information on Cobblestone Tours, go to: ottawabustours.ca