Updated at 6 p.m. to include additional comments from BlackBerry.

BlackBerry QNX officials were quick to downplay the significance of this month’s lost contract, which comes at a time when Ottawa’s industry leaders are trying to brand the city as a burgeoning hub for autonomous vehicle technology that’s anchored by QNX.

BlackBerry QNX designs a variety of software systems for use in the car: telematics, information clusters, the beginnings of assisted and autonomous drive. Infotainment is just one of these systems, but it’s a significant and competitive space.

A spokesperson for the tech company said QNX was never the primary provider of Toyota’s infotainment platform and was instead a supplier to another contractor that worked for the automaker.

However, analysts say Toyota’s move illustrates the need for BlackBerry to either pivot and address a potential weakness, or double down on its established brand: the safety and security of its real-time automotive operating systems.

Toyota Motors announced at the beginning of the month that its 2018 Camry would switch from using BlackBerry QNX to Automotive Grade Linux to power Entune, the vehicle’s infotainment system. It powers several features, including the syncing of mobile phones for hands-free calling and adjusting the radio volume.

There, he attempted to clarify “the real relationship between Toyota Motors and BlackBerry QNX.” Mr. Beard argued the company is not reliant on its infotainment business with Toyota, adding that BlackBerry QNX’s business with the Japanese automaker is spread across many niches.

Additionally, BlackBerry spokesperson Samantha Thai told OBJ that “QNX was never selected as Toyota’s infotainment platform – we were one of its suppliers for infotainment.” 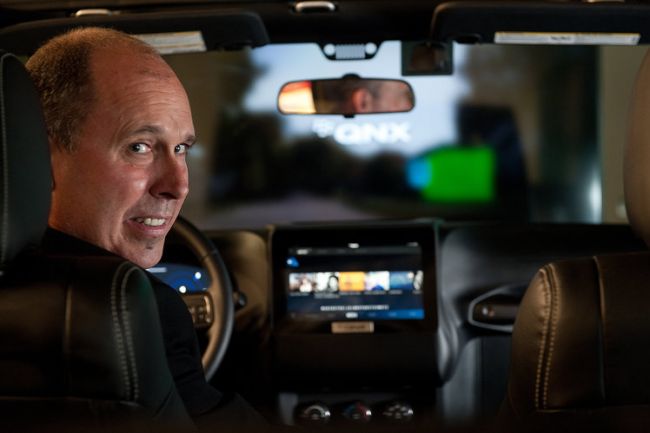 BlackBerry also referred OBJ to recent comments from John Wall, head of QNX, who’s characterized the loss of Toyota as “not anything major.”

“It’s a big deal … The Camry is 450,000 units, and there is talk of Toyota completely moving over to Linux distributions,” he told OBJ in an interview. “They’re one of the world’s biggest automakers, and that’s a big account to lose. So I understand why (BlackBerry) responded the way that they did.”

Mr. Bird says that BlackBerry QNX’s market share in infotainment systems is waning. According to IHS Markit, the firm used to have a majority share in the market, but today stands at 48 per cent with projections that Linux-based solutions will overtake the proprietary provider in the next five years.

Linux in the rear view

Automotive Grade Linux is an open-sourced solution developed by The Linux Foundation, a consortium that counts Toyota, Honda, Facebook, Google and Amazon Web Services among its expansive clientele.

According to AGL’s website, these collaborators seek to use Linux as “an open platform … that can serve as the de facto industry standard to enable rapid development of new features and technologies” in the car.

There are several benefits to a Linux-based, open-source solution. The code is far less expensive to license, and its crowdsourced development means the platform is easy to integrate into existing applications. QNX competitor and Kanata neighbour Wind River develops automotive software on Linux, and is also a contributor to the AGL project.

“It’s a big deal … They’re one of the world’s biggest automakers, and that’s a big account to lose.”

BlackBerry QNX hopes its platform will instead be adopted as the secure industry standard, as Mr. Wall has suggested open-source means more security concerns than a single-source solution.

Todd Coupland, managing director at CIBC World Markets, believes Linux-based platforms likely pose a threat to BlackBerry QNX. While the Toyota departure won’t sink the tech firm, it would’ve been a good account to keep as competition in the automotive operating systems space heats up.

“When I see a decision like Toyota, it doesn’t necessarily say they can’t be in those real-time opportunities in assisted driving. It would’ve been good if they had it, but it’s still a separate decision that has to happen at Toyota and other OEMs.”

Infotainment is not the be-all, end-all of operating systems in the vehicle, a point Mr. Beard was quick to clarify in his blog post. Indeed, Mr. Coupland says there are hundreds of processing units inside cars today, controlling everything from airbag deployment to autonomous drive.

The question BlackBerry QNX has to answer is whether it’s OK giving up market share in systems such as infotainment and focusing on its core brand of secure, connected platforms, or whether it wants to reinvest in multiple areas of the cockpit.

Mr. Coupland says the automotive software industry is ripe for disruption, but BlackBerry QNX will have to fend off competition from Silicon Valley in order to capture the impending growth in the market.

“None of these platforms is close to displacing BlackBerry QNX in safety-critical modules.”

CIBC World Markets currently has BlackBerry’s stock at a neutral rating, and Mr. Coupland has yet to see whether QNX is the best horse to back in autonomous driving.

“QNX certainly can run real-time systems, but are they ultimately going to be the winners in the secure, assisted driving areas of the vehicle?” he asks.

In his blog post, Mr. Beard alludes that BlackBerry will focus on its secure software brand as it looks for in rows to gain share in a rapidly accelerating market.

“We agree Auto Grade Linux, like regular Linux and Android, will have market share in automotive infotainment. But none of these challenger platforms is close to displacing BlackBerry QNX in safety-critical modules, areas that are growing faster than infotainment in the modern software-defined car,” he writes.