From his seat in a boardroom overlooking TD Place stadium, Byron Holland appears relaxed and confident, a CEO with a clear mandate and vision.

What he does not sound like is a man in charge of an organization with flatlining revenues in an industry that has matured beyond its high-growth phase. Yet that’s exactly the position in which the head of the Canadian Internet Registration Authority now finds himself.

A not-for-profit agency responsible for registering and managing all “.ca” domain names, CIRA generates most of its income from website operators who pay to register and renew their names. CIRA and its counterparts all over the world are facing a daunting challenge: Now that the deluge of individuals and businesses signing up for country-based domain names has slowed to a steady trickle, where do they go from here?

“That early adoption and high-growth phase is over,” Mr. Holland acknowledges at the agency’s headquarters in a new office tower at Lansdowne Park. “Only a few years ago, we were experiencing double-digit growth – 12, 15 per cent year-over-year – whereas now many mature registries are approaching zero per cent growth. They continue to have a significant base, but there’s very little growth.” 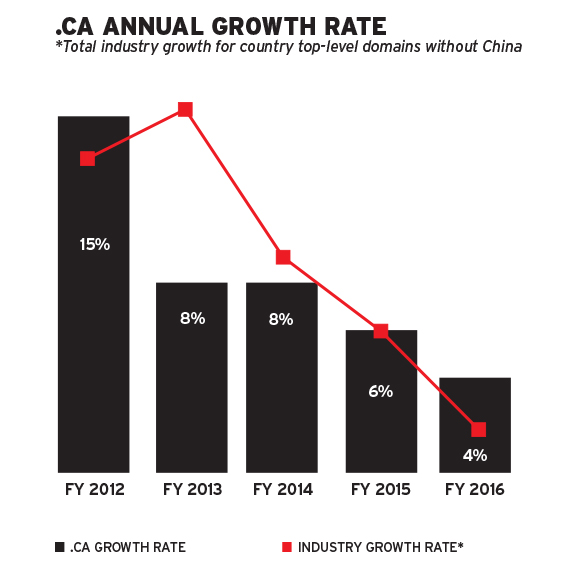 Since becoming the country’s official .ca registry in December 2000, CIRA has registered nearly 2.6 million domain names. Echoing a worldwide trend, its growth rate of new domains has slowed from 15 per cent in 2012 to about four per cent last year – still ahead of the downward global curve, but a decline steep enough that it would keep many a C-suite executive awake at night.

Luckily for CIRA, Mr. Holland says his organization saw this trend coming a long time ago.

“That wasn’t a surprise to us,” he explains. “As a management team, when we looked to the future four or five years ago, we could see that growth curve coming off where it was. That’s when we started to make plans about ‘What are we going to do when that time comes?’”

CIRA’s answer was to become more than just a domain name registry. Tapping into its in-house expertise in how the underlying infrastructure of the Internet works, the agency began rolling out new products to augment its core base of revenue.

Rather than just continuing to manage only .ca domains, for example, CIRA last year launched a platform to provide back-end registry services for newly emerging generic top-level domains – the next generation of domains that aren’t operated at a national level such as .ca for Canada or .au for Australia.

Many of the new domains are controlled by other levels of government or private organizations looking to promote their brands. Thousands are already in existence, ranging from .london to .rugby.

“What we built is without a doubt the most advanced registry out there right now,” he says, explaining that the Fury platform allows customers to set their own pricing and sales options, for example, without having to contact CIRA administrators first.

Eighteen months ago, the agency also unveiled a product designed to bolster Internet security. CIRA’s D-Zone Anycast DNS offering helps protect websites against outside attacks on Domain Name Systems, the Internet’s mechanism for translating alphabetic website names into numeric IP addresses of the servers that host the sites. Hackers often try to “clog” the system by flooding it with unnecessary IP requests in an effort to disrupt traffic to specific websites, and CIRA’s technology is designed to prevent such outside invasions.

The D-Zone product has already gained a loyal following at institutions such as hospitals, schools and universities across the country, Mr. Holland says, and several municipalities have also signed on as customers, including the City of Hamilton.

CIRA has only begun to reap the benefits of its diversification strategy, he says. In the fiscal year ending in March 2016 – before it launched its Fury platform – the organization brought in $19.9 million from registration fees and renewals. Other revenues totalled just $304,000, up from about $212,000 a year earlier.

Mr. Holland says he’s confident the agency’s efforts will pay off in the long run.

“Getting that first customer is the hardest thing to do,” he says. “Once you knocked down that, then you start to see more traction. I would say that’s kind of the phase that we’re in right now. It’s very early days for us, but the signals from the market are good. Now it’s a question of, how do we make sure that we follow the best path forward to really reap the benefit of the things that we’ve built, the expertise we have, the transitions that we’ve made.”

Expanding its focus, he says, required the agency to shift its collective mindset away from being mostly a maintainer of Internet infrastructure to a broader perspective that includes being a producer and seller of web-related services.

“In the old version of CIRA, we didn’t have any business development or sales (staff),” says Mr. Holland, an Ottawa native who joined the agency in 2008 after a tech career that included launching Futura Rewards, a highly successful brand loyalty program.

“There were lots of people here who’d done that in past careers, but as an organization, that wasn’t in our DNA at all. Just trying to build out some of those skills and flex those muscles – muscles that we’d never used before – that was part of the journey, part of the cultural transformation of the organization.”

The transition hasn’t always been smooth. Some of the organization’s private-sector partners, including domain registrars, questioned why a non-profit entity created to strengthen Canada’s Internet infrastructure was suddenly operating like a money-making enterprise. Even some of CIRA’s more than 80 employees wondered if the agency was straying too far from its core mandate, Mr. Holland concedes.

The CEO isn’t afraid to meet the critics head on, arguing CIRA’s long-term survival requires him to look for other sources of income. If he didn’t do that, he says, he wouldn’t be doing his job.

“We have a responsibility to do what’s right for .ca, first and foremost, and a mandate for .ca,” Mr. Holland says. “That mandate doesn’t say, ‘Don’t do anything else.’ The mandate says, ‘Make sure you run .ca really well.’ A high-growth environment is a completely different world than a near no-growth environment. By definition, we can’t behave the same. The biggest risk we could take is taking no risk at all.”

For more than 15 years, CIRA had a straightforward mission: register Canada’s .ca domain names and make sure that when people typed in the name of a website, they ended up where they were supposed to go.

“We were really good at what we did and we did one thing,” says CEO Byron Holland. “Now we’re asking our team, not only do we continue to do that, we also want to invest in new products and services. By definition, not will be successful. We’re going to try new stuff. Not all of it’s going to work.”

That shift in the organization’s mandate has also required many of its employees to alter the way they think about how they work.

“Cultural transitions in organizations … are really challenging,” Mr. Holland says. “They always take longer than you think. Stuff happens you couldn’t have predicted. And getting folks to adopt and accept what in essence are two fairly different perspectives on how to do business has definitely been an interesting challenge for the organization.”

Through it all, CIRA has maintained an enviable record as a great place to work. For three years running, human resources firm Aon has named the agency one of Canada’s top 40 employers among small and medium-sized companies.

“We deliver something meaningful for all Canadians,” CIRA’s chief executive says. “How many companies can say every single Canadian is my customer? That’s a pretty powerful motivator for our staff.”

His main piece of advice to any firm contemplating a significant change in mandate? Be “wildly transparent” about the whole process.

Changing a company’s culture “always takes longer than you think,” he says, and it’s important to explain to employees why you’re doing what you’re doing, every step of the way.

When the organization moved from its former headquarters on Queen Street to its new office at Lansdowne Park, it made many employees anxious, Mr. Holland adds. He held town hall meetings with staff, giving them a chance to offer input and suggestions on the design, many of which were implemented.

The physical layout of the office was specifically designed to help the organization become more cohesive, he says. For example, CIRA’s new digs have a single eating area and only one photocopier room, creating natural gathering places for employees from different departments and fostering a deeper sense of collaboration.