A new downtown NHL arena: What Ottawa can learn from Edmonton

Even news that a major condo project near Edmonton’s new NHL rink is being scrapped isn’t enough to dampen the spirits of the arena’s point man at the city.

“Ten years ago, that would have been devastating news, a condo project being cancelled,” Rick Daviss told OBJ on Friday, a day after Lamb Development Corp. confirmed that slow sales had led it to ditch plans to build a 36-storey luxury condo complex just blocks from the Edmonton Oilers’ new home, Rogers Place.

“But now, it’s like, ‘Oh well, there’s another six that are about to go in the ground and another six under construction.’”

Mr. Daviss, the bureaucrat who shepherded the $600-million Rogers Place project through Edmonton city hall, is a believer in the power of developments such as major sports arenas to breathe new life into a local economy.

“This set the city on fire,” he said of the massive building project that opened in the fall of 2016 and also includes a community rink attached to the main arena and a connection to Edmonton’s light-rail transit system.

“It’s a showpiece. For anybody who comes to town, that’s what you go and look at. It’s a true source of pride for many Edmontonians.” 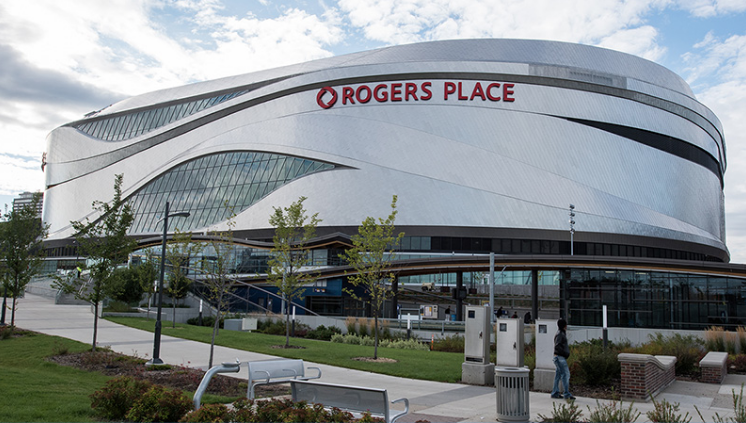 But more than pride, Mr. Daviss said, the new arena has spurred economic growth in the city’s downtown core.

A spate of new condos and commercial office developments near the arena has Edmonton city hall projecting the building boom will generate up to a billion dollars in new property tax revenue over the next two decades.

That’s more than enough, Mr. Daviss said, to offset the drop in value of Class-B and C buildings nearby after tenants fled to developments near the Oilers’ new ice palace.

“All of the naysayers who were saying it’s a white elephant … everybody wants to have a piece of Rogers Place,” he said.

With Ottawa in the midst of its own conversation about the merits of a downtown arena, Mr. Daviss will be at the Shaw Centre on Thursday morning to share his insights and a few lessons learned when it comes to rink-building. He’ll be joined by Bob Black, Oilers owner Darryl Katz’s top man on the arena file, for a keynote address at Ottawa’s Economic Outlook, an annual event sponsored by OBJ and the Ottawa Chamber of Commerce.

Dubbed “Edmonton’s Odd Couple” by a newspaper columnist in the Alberta capital, Mr. Daviss and Mr. Black worked together on one of the largest public-private partnerships in Canadian real-estate history.

Edmonton taxpayers are footing the bill for roughly half of the arena project’s cost. Much of that is coming from a so-called community revitalization levy, which will see a portion of downtown property taxes funnelled to the project.

The team is paying about a quarter of the cost, with the rest funded through ticket surcharges. The city owns the arena and is leasing it back to the Oilers and Mr. Katz.

Mr. Daviss conceded it wasn’t easy to sell taxpayers on the merits of funding such a hefty chunk of the Oilers’ new home.

“(Edmontonians) love their hockey and they would love to have a new arena, but they didn’t want their hard-earned dollars going to the billionaire owner and the millionaire hockey players,” he said.

“What we had to convince the general public and the paying public was that this is not giving money to a billionaire. This is investing into a product that is going to generate revenues which are going to keep your taxes lower and bring new infrastructure and vitality to the city. There was a lot of skepticism. It was a long haul, but people finally embraced that.”

Mr. Daviss admitted he’s not well-versed on Ottawa’s situation, and stressed that a new arena is not a sure-fire cure-all for every city’s economic woes. He points to Edmonton’s biggest provincial rival a couple of hours south, noting the current economic climate in Calgary – where the Flames are pushing for a new arena of their own – is much different than it was in Edmonton when the Rogers Place plan was hatched.

“They’ve got a whole bunch of new development that’s sitting vacant right now,” he said of southern Alberta city, which has been hit hard by the downturn in the oil and gas sector.

“It’s much riskier in Calgary right now than it was in Edmonton when we had our kick at the cat. Going in with your eyes open is the advice I would give. If you think this is going to add vibrancy and vitality and has development potential, I would say jump at it.”

Mr. Black and Mr. Daviss were invited to speak at Thursday’s event by local entrepreneur Doug McLarty, a partner in MNP’s Ottawa office and chair of the Ottawa Chamber of Commerce’s new city-building task force.

Calling a redeveloped LeBreton Flats with an NHL arena “a transformative opportunity for the city,” Mr. McLarty said he wants to kickstart a conversation about the project and its merits.

“It’s all about education,” he said. “It’s about showing the positive impact that something of this nature can have on a city. The financial success (of Rogers Place) is beyond what anybody’s expectations were.”

He said he thinks a few critics of the Rendezvous LeBreton plan might change their minds after learning about Edmonton’s experience.

“It’s not just about the arena. It’s about all of the other aspects surrounding the arena in LeBreton Flats.”

– Doug McLarty, a partner in MNP’s Ottawa office and chair of the Ottawa Chamber of Commerce’s new city-building task force.

“I know there are a lot of naysayers,” he said. “I want people in the city to have an opportunity to hear both sides of the (argument). We want to get a dialogue going.”

While Edmonton city taxpayers ultimately funded a significant portion of their new arena, whether that will happen in Ottawa is still unclear. Mayor Jim Watson said earlier this year the city hasn’t been asked to help pay for a new downtown home for the Senators, and he refused to speculate on such a proposal.

Mr. McLarty said his two children are young adults who’ve chosen to live in Toronto because they see it as a more vibrant city with better career prospects than their hometown. He wants that perception to change, and believes a revived LeBreton Flats with an NHL arena at its core could be a key part of the solution.

“It’s not just about the arena,” he said. “It’s about all of the other aspects surrounding the arena in LeBreton Flats. It’s a much bigger picture than just the facility itself.”

Mr. Daviss knows as well as anyone how talk of public subsidies for arenas can cause emotions to flare.

“That’s all everybody talked about here for three years,” he said. “By the end of the conversation, I didn’t have anybody that wasn’t a supporter, and half the people were skeptical at the start.”