Three years ago, officials at Ottawa’s Merkburn Holdings received the news that no landlord wants to hear: An anchor tenant in one of their office buildings was bankrupt.

Prior to its sudden closure, Everest College occupied an entire floor inside the three-storey office building at 1050 Morrison Dr., located a stone’s throw from the Pinecrest Road-Highway 417 interchange.

“We felt terrible for the students,” says Merkburn managing partner Peter Dooher. “But from a business perspective we looked at it and said, ‘Now we have to get the building leased up.’”

Rather than relying solely on marketing the property’s existing assets, such as convenient location and ample parking, Merkburn retrofitted the building to make it more energy efficient and lower its operating costs.

They correctly calculated that the upgrades would benefit the building’s existing tenants while making the property more attractive to other businesses and organizations looking for commercial space.

The one-time Nortel building is now home to a diverse range of organizations, tech firms and professional service providers who say Merkburn’s flexibility and skilled fit-ups helps them run their operations efficiently.

As a leasing and property management company, Merkburn Holdings starts working with tenants before they even move in.

In the case of St. John Ambulance, this meant a major renovation of the building’s first floor.

“Merkburn stripped it down to the studs and rebuilt it in the fashion that we needed,” says Shawn McLaren, the director of operations for the Ottawa-area chapter of St. John Ambulance.

The new space was designed to suit the unique needs of the not-for-profit first aid provider, which uses slightly more than 10,000 square feet at 1050 Morrison Dr. as an administrative office, training centre, community service area and storage warehouse.

For example, to facilitate the unloading of cargo and the stocking of ambulances, Merkburn installed a special exterior door in the building that’s accessible only to St. John staff and volunteers.

What’s more impressive is the timeline for the fit-up: Merkburn was able to deliver the fully renovated space in just eight weeks.

“It’s let us re-establish ourselves as the lead first aid provider in the city,” says McLaren. “We’re very happy – this is the building we wanted from the beginning, and they worked very hard to make it happen.” 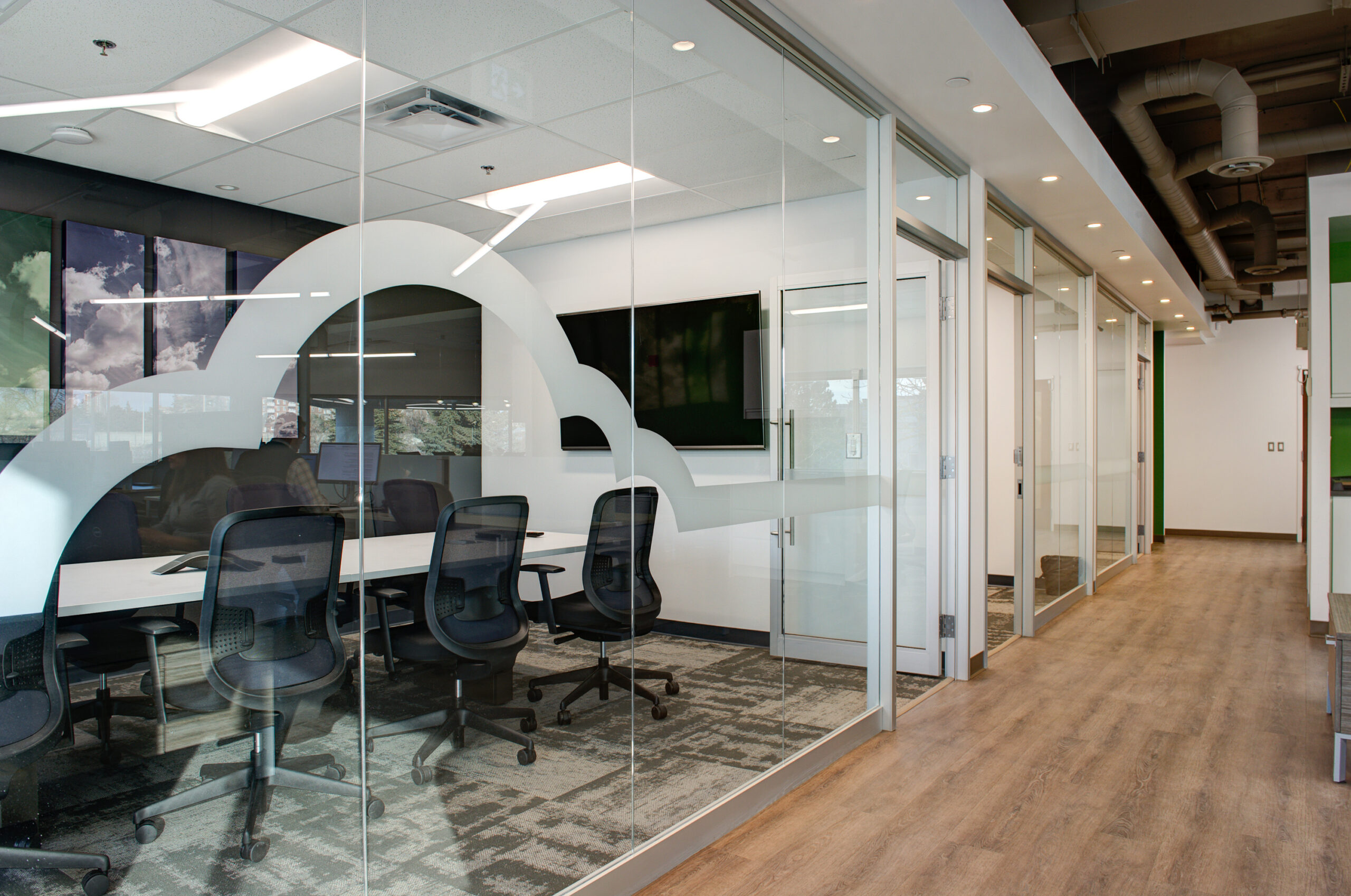 One floor up, tech support firm HostedBizz had a similarly positive experience upon moving into a suite on the building’s second floor, in space formerly occupied by Everest College.

Co-founders Jim Stechyson and Paul Butcher wanted their space to reflect the vibrant energy of the firm, which offers cloud-based IT services to businesses across Canada.

The open-concept office is outfitted with several breakout rooms as well as designated focus areas. The bright space features large glass walls, and is decorated in HostedBizz’s colours: green, white and grey.

Though a third-party designer drafted a concept for their office, once it was handed to Merkburn the property manager was able to implement it to a tee.

“It really was a full turnkey delivery for HostedBizz,” says Stechyson. “Merkburn removed the burden from having to worry about any of the fit-up coordination.”

Are you considering your next move? Merkburn has many properties available, including units at 1050 Morrison Dr. Head to Merkburn.com for leasing opportunities.

Constructed in 1984, the building was originally used by telecom giant Nortel. Merkburn purchased it in 2005, at which time it underwent a major renovation and was subdivided into a multi-tenant layout.

In addition to the many improvements that have been made to the west-end property, its proximity to the Queensway is also a major draw for tenants. The eastbound on-ramp runs directly past the building’s rear parking lot.

Following the college’s closure, Merkburn gutted much of the building, upgrading its electric baseboard heating to gas and retrofitting the lights to energy efficient LEDs. The heating and AC, which was also upgraded, are now operated on a smart system. It adjusts the temperature in different areas of the building based on factors including occupancy and the weather.

“It makes us more competitive in the marketplace,” says Peter Dooher, managing partner at Merkburn Holdings.

The ultimate goal for Merkburn was to lower the building’s operating costs by $2 per square foot. Though it’s been less than a year since the upgrades went in, they’ve already dropped by over a dollar, and are on track to meet the goal in the coming year.