At 25 Eddy St. in downtown Gatineau, a pilot project designed by leading Ottawa-based interior design firm 4té Inc. is changing the way government employees work. It’s nothing like the government offices of past and present – this new open-concept office, carefully designed using playful lighting and a variety of collaborative spaces, looks more like a modern tech company. However, this project may well be the future of government working.

With more than 30 years of experience designing government workspaces, 4té Inc. was ready for the opportunity to bring this vision to life.
Sonia Powell, the director-general of workplace solutions in Public Services and Procurement Canada’s real property services branch, says this pilot project marks a major departure from previous government offices.

The vision for GCworkplace is based on lessons from past accomodation projects, trends in the private and public sector as well as conversations with public servants.

“We’re challenging what it’s like to work in government,” says Powell. One of the central elements of the new workplace is mobility. Powell says the GCworkplace needs to be responsive to the needs of a workforce that is increasingly moving around, transitioning to digital processes and working in various teams.

This is addressed using a concept that’s a big change for most government employees: at 25 Eddy, there are no assigned spaces. Workers can make use of a range of workpoints depending on the task of the day. Instead of adapting to the space they’re given, Powell says this new space adapts to them. 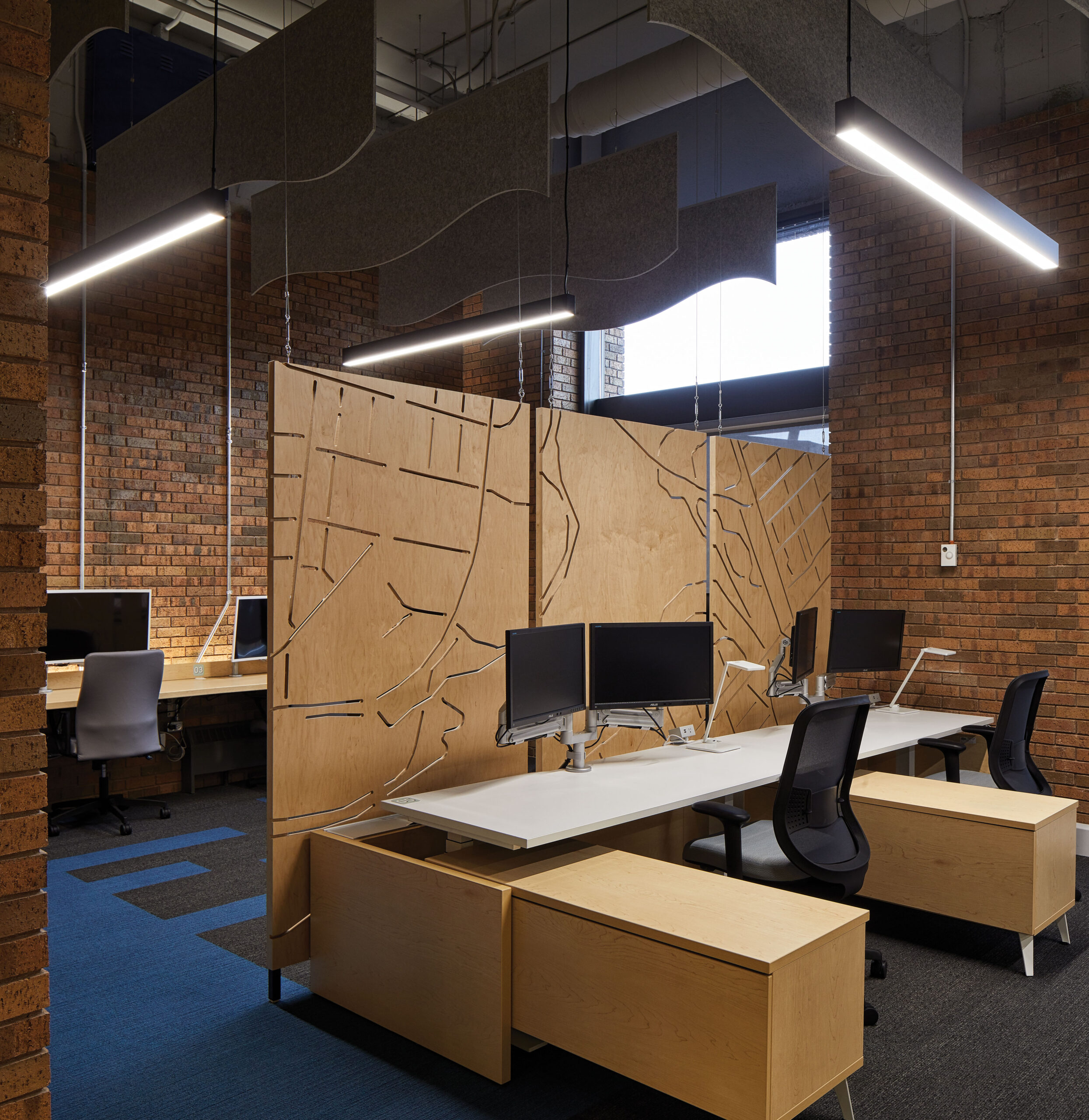 As the lead consultants on the design, 4té Inc. worked with an involved team that included Rossmann Architects as the prime consultant, Gatineau-based Boless Inc. as the contractor, and landlord BGIS as the project managers. Together, the team sought to bring the primary values of GCworkplace to the federal government’s project management team.

4té Inc. principal Tzoofit Hammer says the finished space is a reflection of the value an Interior Designer can bring to a project.

“It represents the creativity of what 4té does,” says Hammer. 4té Inc. Interior Designer Candice Gertsman agrees, adding that their firm is involved from the very beginning of the process, starting from client requirements to architectural drawings to furniture selection.

Hammer says paying homage to the history of 25 Eddy was central to the design. The original brick walls are exposed at every turn, creating a warm, welcoming atmosphere elevated by the exposed ceiling. The previous carpeting was removed and the existing concrete below polished.

“We wanted to make sure that we respect some of the elements that were here,” says Hammer.  “I think the space echoes a lot of the original building’s characteristics.”

“It’s a completely modern take on a heritage space.”

Gertsman says balancing modernity with the character of 25 Eddy was a challenge the firm welcomed.

“It’s a completely modern take on a heritage space,” says Gertsman. “That required a lot of finesse.”

A garage door repurposed from the previous space now greets visitors, printed with a photo of the Alexandra Bridge. Past the door, to the left, workpoints become more and more focused and quiet, while to the right they become more collaborative. At either end of the space are carved wooden panels, one with a map of Gatineau and one with a map of downtown Ottawa.

The bridge is meant to represent the connection between the two cities of the National Capital Region, explains Hammer.

The transitional effect from focused to collaborative is key to making the space work. At the very end of the quiet zone are individual pods, as well as one-on-one meeting rooms and a few single-person focus rooms. Horizontal grey sound baffles stretch the length of the space like waves.

Intimate alcoves line the inner wall as the space becomes more collaborative, and the colour schemes reflect the workstyles – the quiet zone is marked by a calming array of blues, which transition to green and finally to bright mustard yellows.

Gertsman says 4té Inc. organized the space intentionally to accommodate the varying sound levels created in an unassigned open-concept workspace. Many open-concept offices sprinkle collaborative space throughout their workstations, but when seating isn’t assigned, that approach doesn’t work, she says.

Powell adds that the space is designed to give employees a full range of options depending on their daily needs.

“It’s about allowing this natural transition from the noisy areas to the quiet areas,” says Powell.

Of course, an office without assigned space comes with some specific requirements. One of these is storage – since employees are entirely mobile, they need spaces for their outerwear, documents and other belongings. 4té Inc. incorporated lockers discreetly into the hallways, and also provided each desk area with a low wooden credenza that functions as temporary storage.

Hammer says 4té Inc. put a lot of thought into making the new space intuitive for its users, making the transition to GCworkplace an exciting, transformational experience.

“The key is creating space that’s multifunctional,” she says. “We need to make sure it’s a comfortable space to work in.”

For Powell, the pilot project has been a success. Though the new way of working was a learning curve, she says employees like having the ability to choose their space each day.

“What we’re trying to do is design a space that reflects the way we actually work,” she says. “It feels quite natural once you get used to this idea of moving around.”

She says the design choices 4té Inc. made reflect the user group the space is made for, and the people who have been working there can’t imagine returning to their old offices.

“What we’re finding pretty much across the board is people who have transitioned to this new way of working … they would never go back again,” she says. “It’s got the vibe of what we do.”